With the MLS season set to open in about 48 hours, there are some updates from Major League Soccer on a number of fronts, first is this announcement from MLS

NEW YORK (March 8, 2012) - In 2012, Major League Soccer's Direct Kick television package will feature additional games and additional MLS Clubs for the same price as last year, $79.* This year's television package will provide fans the opportunity to watch up to 233 MLS regular season matches and select playoff games during the 2012 season. MLS has collaboratedwith all four providers to offer a FREE PREVIEW on Saturday, March 10 and Sunday March 11, during the opening weekend of the season known as MLS First Kick presented by Dick's Sporting Goods.

Direct Kick returns for the League's 17th season and is available on four separate outlets. Starting March 10, satellite TV providers DIRECTV and DISH, along with most major U.S. cable systems via digital cable provider iN DEMAND L.L.C. and digital media services provider, Avail-TVN, will once again each present regional telecasts of MLS action.

The residential price is just $79 on any of the four platforms. Commercial establishments can purchase the package for a flat rate of $100. The package will be available for purchase through each outlet between now and the end of the season.

after the jump more updates, including the new MLS app, and more:

If you are always on the go and don't want to be tied to your TV for Direct Kick, well then you might want to check out the new MLS Live package, which no longer just will get you MLS matches on your computer, but now it:

You can get more details on the MLS website, but this is exciting that one subscription ($59- STH's get a discount) will now cover multiple devices. I do still wish this would cover android phones and tablets, but maybe one day.

Then there is the new MLS Fantasy Soccer: Manager game, which is an interesting update to previous versions. I like the game, and I was able to build a team of all current or former Real Salt Lake players. Yes it includes Wilis Forko. You can build your own team at http://fantasy.mlssoccer.com/ If you want to match your team against mine and other readers of the blog, you can join my league " The Soapbox" or if you already have a team you can still join by using league code 5780-1247. Here is what my team looks like: 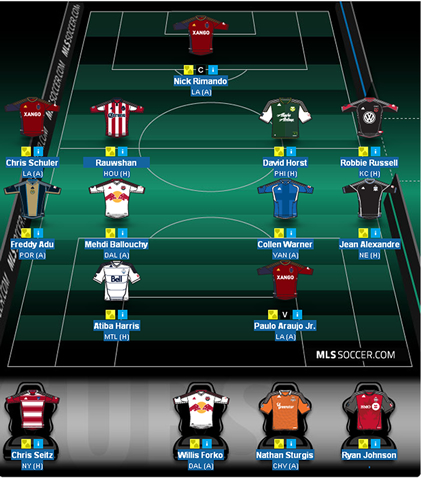 Finally there is the launch of MLS MatchDay 2012, out fresh today a rethinking of the 2011 version. I have just downloaded it for my iphone and ipad from itunes now while those of us with android devices as well got left out in the cold on MLS Live, not so for the MatchDay 2012 app, which can be downloaded from the android marketplace(which now has been renamed play.google.com/store - wow that is really stupid). Here are some of the features of the new app:

So yes fans of Major League Soccer, there are a lot of fun new things for you to enjoy this season. It is a good time to be a fan of MLS.

What do you think about all these ways for you to get your MLS fix?