Share All sharing options for: Real Salt Lake by the Numbers - Week 7

Well we are now heading into week 8 of the Real Salt Lake season, 7 matches in the books which is 20% of the season, so it is time to take a look at the numbers to find out how RSL stacks up against both their own past as well as against the rest of the league.

So let's start with how RSL matches up with the rest of the league at this point:

after the jump we take a look at how RSL stacks up against their own past:

So for me one of the always interesting ways to look at RSL and how they are doing is to compare them against themselves, I usually do that in 3 ways (Points, Goals For, Goals Against), do lets take a visual look at those categories: 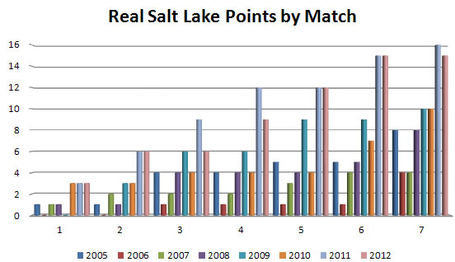 So we are currently at 15 points, one behind last years tally after 7 matches, but we are 5 points ahead of our MLS Cup year of 2009. To me that isn't a bad thing at all, a solid start to the season.

How about the offense? Well let's look at goals scored: 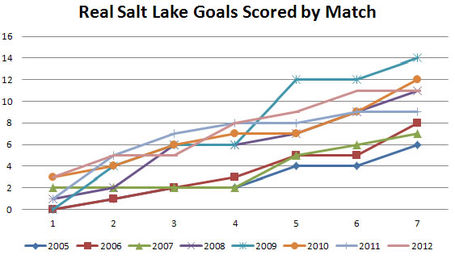 This of course brings us to defense, which means goals allowed: 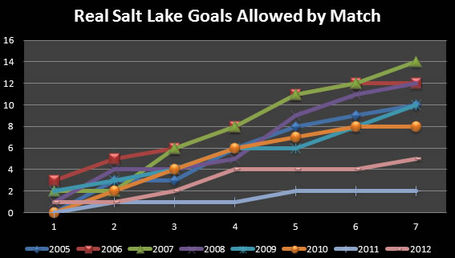 Remember this one is about being as low as possible, and the only time RSL's defense has gotten off to a better start that this year was last year when we didn't allow our 5th goal until week 11 of the season. It is interesting to note that in our historic defensive year of 2010 when we only allowed 20 goals to be scored against us all season, that we had allowed 8 goals to be scored in our first 7 matches. Can we get a streak of 6 straight shutouts like we had in 2010?

All of this tells me that RSL is off to a very solid start to the season, and while it might be overshadowed by the incredible start that Sporting KC has put together, reality is that at 15 points after 7 matches we are on a pace to hit 73 points this year, oh my what a year that would be.