US Soccer announced today that the US Women's Olympic team will play their send off match on June, 30th 2012 at Rio Tinto Stadium and their competition will be the other CONCACAF representative at the 2012 Summer Olympic games in London, the Canadian Women's team.

This match will be a 12 noon MT kick off and will be broadcast nationally on NBC the official channel of the 2012 Summer Olympic games. Here is the official announcement:

Match in Utah Will be Send-Off to Olympics and Broadcast Live on NBC at 12 p.m. MT

CHICAGO (April 5, 2012) - The U.S. Women's National Team will face Canada on June 30 at Rio Tinto Stadium in Sandy, Utah, in its final home match before the 2012 London Olympic Games. Kickoff is set for 12 p.m. MT and the match will be broadcast live on NBC. Fans will also be able to follow the match on ussoccer.com's MatchTracker and via Twitter @ussoccer_wnt.

Tickets starting at $22 go on sale to the public Friday, April 13, at 10 a.m. MT through ussoccer.com, by phone at 801-727-2700 (Monday-Friday, 10 a.m. to 6 p.m. MT) and at the Rio Tinto Stadium ticket office (open Monday-Friday, 10 a.m. to 6 p.m.). Groups of 20 or more can obtain an order form at ussoccer.com or call 312-528-1290. Ultimate Fan Tickets (special VIP packages that include a premium ticket, a customized official U.S. National Team jersey with name and number, VIP access to the field before and after the game, and other unique benefits) are also available now exclusively through ussoccer.com.

more info after the jump:

As a sponsor of U.S. Soccer, Visa® is pleased to offer all Visa cardholders access to an advance ticket sale for this match before the sale to the general public. This advance sale starts Thursday, April 12, at 10 a.m. MT and runs until Friday, April 13, at 8 a.m. at ussoccer.com. Visa will be the only payment method accepted through the Visa presale and is the preferred card of U.S. Soccer. Terms and conditions apply.

The USA heads to Rio Tinto Stadium for the second time and will hopefully find milder weather on this trip. On March 31, 2010, the U.S. Women played at Rio Tinto for the first time when they faced Mexico on a field covered in snow and pulled out a 1-0 victory on a late goal from Abby Wambach.

The USA's next full international match will be against China on May 27 at PPL Park in Chester, Pa. (TICKETS)

The USA, which currently sits atop the FIFA Women's World Rankings, recently returned from Japan, where the team drew 1-1 with the hosts on April 1 and defeated Brazil 3-0 two days later in the Kirin Challenge Cup.

Home to Real Salt Lake of Major League Soccer, Rio Tinto opened in the fall of 2008 and is part of the new wave of soccer-specific stadiums for MLS teams. The venue seats 20,000 fans and a sell-out would narrowly eclipse the record crowd to watch the U.S. Women in Utah, set on June 14, 2003, when 19,584 turned out at Rice-Eccles Stadium in Salt Lake City to see the Americans trounce Ireland 5-0.

Canada (currently seventh in the FIFA rankings) finished second to the USA during the CONCACAF Olympic Qualifying tournament in January at Vancouver and will also be ramping up for the journey to London. The U.S. team will leave for the Olympics about a week after the match at Rio Tinto, giving the U.S. fans a chance to give the team a rousing send-off as it looks to return to the top of the podium. The match with Canada will mark the 51st meeting between the two countries, the most of any opponent in U.S. history.

For some additional information you can check out CONCACAF.com profile page of the US Women's team, remember that unlike the men's team for the Olympics there is no age restriction on the women's teams.

This is the roster of the team that qualified for the games and might be a preview of the roster that will head to London this summer:

You can also check out (if you really want to) the official rules and regulations of the soccer competition at the Olympics.

The last time the US Women's team played at Rio Tinto it was the match against Mexico which brought us this famous goal celebration: 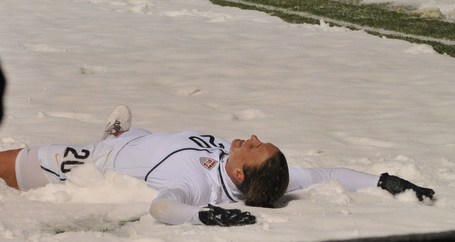 Yes that is Abby Wambach celebrating a US goal by making a snow angel.

I doubt we will see any snow angels on June 30th, but what can we expect as a goal celebration from the US Women?