Real Salt Lake by the Numbers - 13 matches in

Share All sharing options for: Real Salt Lake by the Numbers - 13 matches in

Well there are 34 regular season matches on the MLS schedule this year for each team, for Real Salt Lake they have had the busiest start of any team in the league with 13 matches already played. That means that RSL has completed almost 40% of their season and so far one would have to claim it has been a rather successful start of the year for the claret and cobalt.

So we can look at the what might be the most telling number, that is the number of points per match that teams are earning. The last two seasons the LA Galaxy have been the winners of the Supporters' Shield with and average of 1.97 points per match. So this year has seen a number of teams get off to very good starts, 5 teams are above that total as we stand today:

you can check out the full MLS break down of points per match plus more after the jump:

So as you can see some teams have a real shot at history if they can keep their winning percentage up, I believe the number is largely due to the fact that we have seen so few draws this year in MLS. So what does this mean for Real Salt Lake?

Well RSL has 26 points from 13 matches, a number that is higher than their total from any other season at the same point. Last year it took RSL to match 15 to get there, in 2009 it took until week 19 to get 27 points. Here is how it looks on a graph. 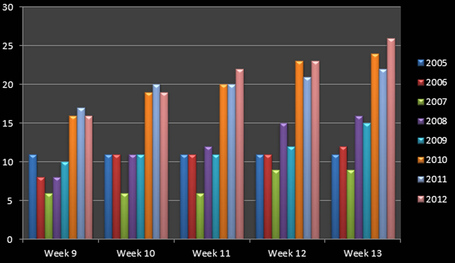 7 points over the last 3 matches is a great total and the biggest bump RSL has had this time of year. Now I have to say that the RSL season has been one which has surprised me a bit, given the injuries, suspensions, debatable calls, and roster turnover. It has been done by hard work, and exceptional effort as the results haven't been easy, which is why when I look at goals scored RSL is a bit behind their past offensive prowess. 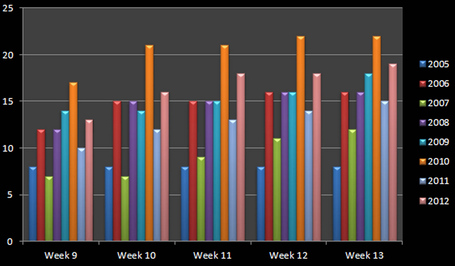 We are running just a bit behind the pace set in 2010, but we are ahead of all our other seasons at this point. I think as we get guys back healthy that you will likely see the offensive output improve, one thing is for sure if Fabian Espindola has anything to say about it he will extend his role as the all time leading scorer in RSL history by a good number this year.

So then there is of course goals allowed, and while RSL has 5 clean sheets in 13 matches which is 38%, not a bad number so how does the RSL goals allowed of 2012 of 12 stack up against our own past? 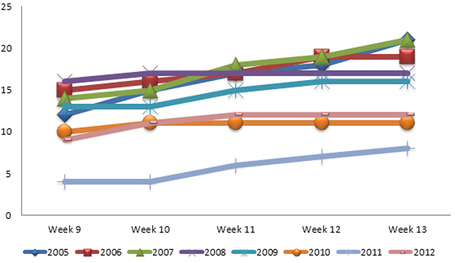 Just as a note, 6 MLS teams have allowed fewer than our 12 goals and of course none of them have played our 13 matches. Only RSL's own past, we had only 8 allowed at this point last year but it is very close to the 11 allowed in 13 matches during the record setting 2010 season when RSL allowed only 20 goals all season (30 matches).