A look inside of Major League Soccer's Collective Bargining Agreement

Share All sharing options for: A look inside of Major League Soccer's Collective Bargining Agreement

So it has been a while and getting any official information from either Major League Soccer or the MLS Players Union about details of the Collective Bargaining Agreement that was agreed to just days before the 2010 MLS season was scheduled to start. It cause a lot of conflict and controversy between the league, the players and to some extent the fans, but in the end a deal was reached and the season went on and since then there have been little things that have signaled some of the changes but recently I was given access to what I was told was a partial summary of the CBA that currently governs MLS.

There was little shocking in the document, and not a lot that was really revealing but that is the nature of these types of documents. I did find some interest in the Salary Cap numbers that will be in play the next couple years:

I had nope that maybe we would see the cap grow a bit more quickly, we have to remember that most players have contracts that grow 5-15% a season. In fact we know that for players that make under $125,000 a year that if they play in 66% of their teams matches they will get at a 10% raise, and if they play in 75% of a their teams matches they will get a 12.5% increase.

The cap isn't growing quickly enough to keep up with that and that means that teams are forced to let players go because of cap restrictions and less about performance. That seems like a real shame for a league that needs constant improvement in quality of play to keep growing.

more information after the jump:

So recently RSL GM Garth Lagerwey talked on ESPN KALL 700's On Frame program about how while we know the cap number and we get some salary information from the league that there are a lot of other things that play into the salary cap, things like allocation money, things like player bonuses. There are a lot of ways that players get bonuses, one of them is player appearances.

Now I totally understand that players deserve to be paid for their time, everyone else with a job gets paid for their time, and so should players. Yet I find myself missing the days of the autograph alley after matches, I thought it was a great way for the younger players to build relationships with the fans and I miss it. It was nice to see both Lalo Fernandez and Sebastian Velasquez recently taking time to interact with fans at halftime of a match they weren't playing in: 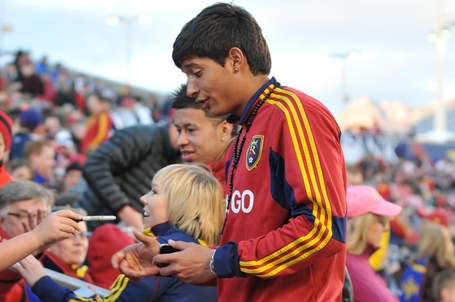 things like that can turn people into fans for life. Still there were some players that were clearly abused by their teams and the league, so rules were put in place and I have a hard time thinking these rules aren't fair:

Teams are required to provide a schedule to the players 1 week in advance.

I told you there wasn't anything really shocking in the CBA but there was one thing that I found really interesting, as a fan I have long wondered what players think about mid-season friendlies and while I am sure a lot of them relish them as a chance to test themselves against some of the best players and teams in the world, for others playing in these matches is a potential income source.

The CBA also includes a schedule of appearance fees for MLS players who play in exhibition games for their Clubs (either home or away) during the regular or post season. The fee schedule does not apply to preseason games. Games are divided into Tier 1, Tier 1A and Tier 2 depending on opponents.

Any team other than those listed above.

The appearance fees are:

I do find the tiers interesting, but remember that a lot of MLS players don't make a lot of money from just their salary, and things like appearances and friendlies could along with other bonuses provide a real boost for guys trying to make a living.

If you think this isn't a concern for the league think about this, RSL drafted Oliver Kupe, who was allowed to finish his education at Northwestern, and then received a job offer outside of soccer that he chose to take, rather than take the risk of signing with MLS for what likely would have been a minimum contract, which in 2012 is $44,000.

Again, I have to be clear the final details may have changed this info was simply from a brief that circulated prior to the season starting. I am still waiting for the final version to be released by one side of the other, but it is clear that there are some interesting things that were covered as part of this CBA. It is also clear that MLS is still taking a very cautious approach to things, and while this deal was being worked on when the economy was struggling, I have to say that I think the league is being a bit tight in a number of areas. Over and over again we have heard Don Garber talk about wanting to make MLS a top league in the world, well that isn't going to happen with league minimums like this.

So what do you think?