For Major League Soccer it is all about the numbers, TV, attendance, and season tickets

Share All sharing options for: For Major League Soccer it is all about the numbers, TV, attendance, and season tickets

On Wednesday @MLS tweeted the following:

So it is kinda funny that I was looking at some numbers recently and some of them compared the footprint of MLS on soccer in the US, how much of the dollars generated by TV did MLS capture and how much of the live event dollars did MLS capture? Now the numbers were generated in 2009 but I think they are revealing as a guideline to how the gap between the fans who buy tickets and come out to matches and the overall lack of TV ratings.

now those might be a bit hard to see with such a small image but let me explain what you are seeing the yellow section on each chart represents the portion of the revenue pie that MLS gathers from various sources. So the first is a break down of the $126,000,000 cumulative US TV spend. MLS claimed $9,000,000 of that pie, which was dominated by Mexican League soccer, Premier League soccer, and La Liga soccer, who had $50,000,000, $20,000,000 and $16,000,000 respectively. In fact MLS generated the same amount of revenue 7% as did the FMF rights.

Now we all know that MLS has struggled with their TV ratings and we have talked about that in the past, but it is the second chart that spells a much better story for MLS, that is the breakdown of the $136,000,000 cumulative US spend on tickets to live soccer events. Here MLS owns 45% of the market, and generated a whopping $61,849,765, the next closest rival was the Gold Cup which claimed $15,000,000 in total ticket sales, the combined international friendlies from CAA and SUM generated just under $25,000,000 in ticket sales.

After the jump a much deeper look at some of the numbers from both the live event side as well as from TV:

So from this we can clearly see that for MLS revenue is generated via live events at almost 7 times the amount of money brought in by TV. Now this is a great thing as it means lots of people are coming out to watch MLS, and in 2007 and 2008 the average number of paid attendance was at its highest level since 1996.

So here is a chart that looks at both the TV ratings and average paid attendance from 1996 to 2008:

The live numbers have continued to go up as the league has grown since 2009, and while many teams have added to their fan base, the overall average is clearly impacted by the Seattle Sounders and their ability to draw over 38,000 each week. The number that was 12,604 in 2008 was up to 17,872 last year and so far this year it is up to 18,775.

So while the number of fans showing up and paying for tickets has gone up since the league started expanding again, the TV numbers are a whole different matter, and as a result you can see that the overall TV ratings are simply flat for MLS, which is why the league can't find a way to get more money for their TV rights. I have written in the past about the issues with MLS and their inability to draw decent ratings with their national TV partners, the reality is that the league with the exception of their first year has been simply unappealing to a national TV audience the ESPN number of 0.21 in 2008 is as of last year a 0.24. This despite adding the Sounders to the league, despite big names like David Beckham and Thierry Henry and the millions spent on DP's the league simply is unable to get the attention of the larger sports market and thus larger TV ratings.

I think part of the problem with MLS and TV is an expectation that all soccer fans will be MLS fans, and that the appeal of the USMNT, World Cup, FMF, and even European soccer represents their potential market. They aren't completely wrong, but clearly things aren't as easy as that.
Let's look at a demographic that MLS focused a ton of attention on over the years, the Hispanic market, a group that is a natural target for MLS. They have a historic relationship with the sport, so it would be stupid to not try to attract that group to the league. The problem is split data, so while the Sport Business Journal back in 2010 published data showing that Hispanics make up 23% of MLS fans: 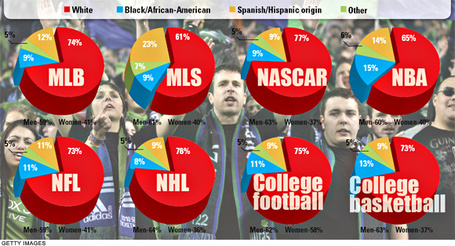 in that same edition they revealed that MLS is less likely to have "avid fans" among Hispanics than the Winter Olympics: 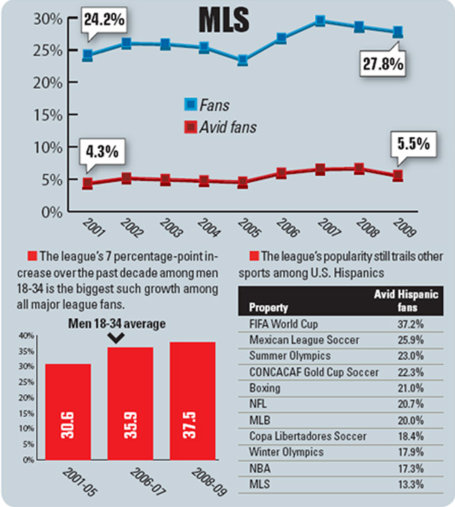 I think if MLS is waiting for fans of the World Cup or of the USMNT or FMF to start watching MLS, they are barking up the wrong tree. Often I have been reminded that World Cup numbers like the Olympics get a huge boost from casual fans who follow out of nationalistic pride, more than a dedication to soccer.
So should MLS continue their approach or simply try something else? Could a radical move away from ESPN and NBC Sports to a full blown MLS Live work? Think about it, what about a MLS Live network to go along with the multi-platfrom product that launched this year? It could replace Direct Kick we could then see MLS compete for rights to other leagues, create their own programming that would do what the networks won't feature recap shows, feature player profile shows, I know it would be a struggle to fill up that much content but perhaps a partnership with some lower divisions, full broadcasting of the US Open Cup, some NCAA soccer, and other programming could be included. The time for radical ideas is now as we are in a period of time when technology and options are more rampant than ever before. Clearly we have seen almost two decades of the same ideas and same strategy and it hasn't worked, so perhaps some radical change is needed?

Perhaps the answer lies in what has driven the one area that I think Major League Soccer has shown real leadership and growth in, and that is ticket sales. In particular Season Ticket Holders (STH). So here is what I know from an internal MLS document as far as the full STH sales for each team in MLS as of April 2009:

Now those numbers are troubling to me but remember this was in the depth of when the economy was tanked, so via big soccer (which actually linked various sources), here are the most current numbers:

On the Big Soccer page they have: Red Bull New York ----------- 7,800 (2012) as unconfirmed .
I know from a source that as of September 2010 that the following teams had these numbers:
Those numbers show that in most markets there has been growth, for some teams like Sporting KC, Houston, and New York their numbers have gotten a big boost from new stadiums, but you will notice that of the top 10 teams in STH sales, only two of them are original teams (Kansas City, which has been rebranded and has a new stadium, and the poster team of MLS the Los Angeles Galaxy) all the other teams are expansion teams or in the case of Houston a relocated team that has also just opened a new stadium. There is clearly something happening with the new clubs that have joined MLS, a level of excitement that has translated into people willing to by season tickets.
I will use the top club as an example, the Sounders leveraged a number of factors in getting such rapid growth in their market, first they had an organization and a team already in place. The Sounders had existed in one form or another for decades in the market and when they combined that footprint with the power of an existing NFL front office they were able to do things that no other MLS team had. I remember when a number of us went up for the 2009 RSL opener in Seattle and we were amazed at the fact that you could buy Sounders merchandise everywhere, from the team store, to sports stores, to the Space Needle, all the way to every 7-11 in town. It was more than just merchandise the initial marketing of the Sounders, their scarf the city campaign, and more were simply as well done as any effort to launch or relaunch a brand. Now some people would be quick to say, well it is the old NASL teams, they have such a great legacy that it is a given that they would be successful. I don't buy it, because of cities like Toronto, Philadelphia, and Montreal had some version of NASL teams but nothing hugely successful and nothing linked to their MLS teams. So what is it that is allowing the newest teams in Major League Soccer to have such success?
One thing is clear for Major League Soccer the cap on how much money can be generated by live events is real, and the potential earnings on television are not, but without radical change when it comes to TV I doubt we will ever see the type of growth that we have seen in ticket sales.
So as fans of Major League Soccer, what are your thoughts? How can your team get more STH's? Can MLS find a way to capture a national TV audience?
OFF MY SOAPBOX