Share All sharing options for: Major League Soccer is getting ready for Windows 8 and it looks good

So we know that MLS has a good ipad app, a decent iphone and android app, and they have done good work in making them better since their launch. If you remember back a couple years ago when Microsoft was getting ready to launch their new phone OS, they showed off an app from MLS. Well yesterday marked the latest round in pre launch steps being taken by Microsoft to get ready for their fall launch of Windows 8, their release preview became available. For the geeks in the house, that means you get a chance to look at a very close to final version of the product, and with Window 8, Microsoft is really breaking new ground. They have moved to an interface that is familiar to some of us who have used their Zune products or their latest version of Windows Phone, it is being called "Metro".

So this new interface is very 'tablet/touch" centric, and while it works well on my neither of those test laptop (a 5 yr old HP) it is a very different look and feel from anything that Microsoft has attempted in the past. One of the big moves for them is the use of apps, which will function both on PC's as well as tablets that will be running a version of Windows 8. If you want to know more about the new OS, I recommend checking out the latest review of it from theverge.com.

I downloaded the latest version yesterday for some testing at work and because I am a geek and when I went into the app store (you can get a great idea of what that will be like via the MSDN blog), I was a bit shocked and amazed to see a new MLS app. So I of course downloaded it and while I am sure like the OS this is a preview version of the app, you can from this screenshot start to see what it might be like when it launches.

You can check out some pictures after the jump: 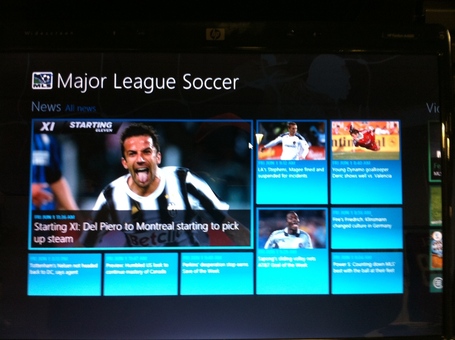 sorry the picture is blurry, trying to take a picture of a laptop with a phone is not as easy as one would think. Anyhow this is the home page, and each of the stories (the blue areas) can be clicked to open up that particular story. The app scrolls from side to side to access other areas of content. 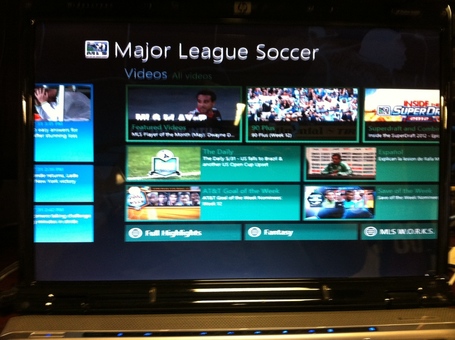 I did like that the videos buffered really quickly even with me using a less than great wifi connection. I think this is a great improvement over what the current ipad app has to offer. 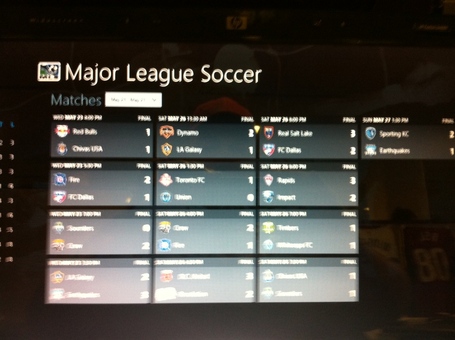 Here you can see what the scoreboard looks like, and I have to believe int he final version this will be how you get to the match information as well as MLS Live integration.

Here is a picture of the local team page, I love that it connects to the teams daily collection of links 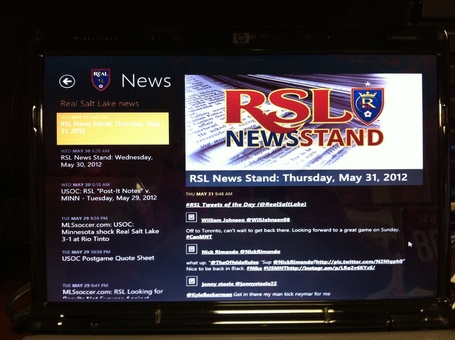 So while this is still a preview of what will be the final app and a preview of the operating system, I am very impress with what I see and I can't wait to see this working on a fully touch controlled device. I am often a very harsh critic on MLS in a lot of areas but I also like to give credit where it is due and the digital team at MLS is doing a damn fine job.