So I always love it when I can get out to a RSL practice, it happens far less often than I would like so it becomes more fun when I get to go. The new location is wonderful as it is just a couple blocks from the trax station, and a very easy walk going down the hill.

So the energy was good, but I am still a bit convinced that things just don't seem right so far this year. Don't get me wrong, no panic but I have always found the practice sessions to be both intense (in the work being done) and festive (the players seem to enjoy themselves). While we know that Jason is working guys hard after the loss to the Minnesota Stars in US Open Cup action, it just seems a bit more mechanical lately.

There were a good mix of some new faces at practice as we know a couple guys are in on trial, and with the Academy on summer break a few of the youngsters are in town getting some practices in with the senior team, and maybe some minutes in Tuesday's reserve match. I loved that there were some good drill run, but that a large portion of practice was comprised of various mini matches of various number and field configurations.

There were a few faces missing at practice beyond those with national team call ups (Nick Rimando, Kyle Beckerman, Will Johnson, and Alvaro Saborio) as I didn't see either Javier Morales or Jamison Olave at practice. A couple guys were limited to running laps (and some bike work I am sure) as both Luis Gil and Leonne Cruz looked like they wish they were able to get into action, as was Chris Schuler.

After the jump a couple of pictures and some details on a couple of the trialists as well as some thoughts on guys who stood out today:

So most people know that former New England Revolution player Kenny Mansally is on trial with RSL and I couldn't be happier, while he was played as an forward by the Rev's the reality is that for Gambia he plays either in the midfield or as a left back. He isn't a huge player at just 5'9" but is very quick and very strong, it will be interesting to see what happens with him. 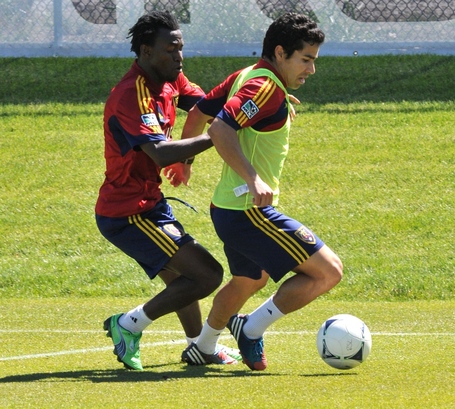 There was also Matias Quiroga, a left back/ defender from Argentina who looked very comfortable on the ball, but I am a bit confused as ESPN's website lists him as 32 and born in 1980, while Wikipedia has him as a 26 year old born in 1986. I am tending to believe the latter, he most recently played for Club Atlético Huracán in Buenos Aires. 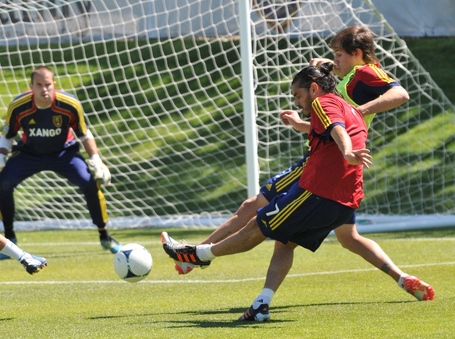 There was also a young striker Victor Garcia, a 23 yr. old striker with some family ties to the LDS Church who most recently was with Cruz Azul Hidalgo, which is Cruz Azul's 2nd division team. I thought he looked good today, but I hear that he had a very rough first practice with the team yesterday. Should he stick with the team, he could be a very interesting player as he would be the first Mexican player for RSL. 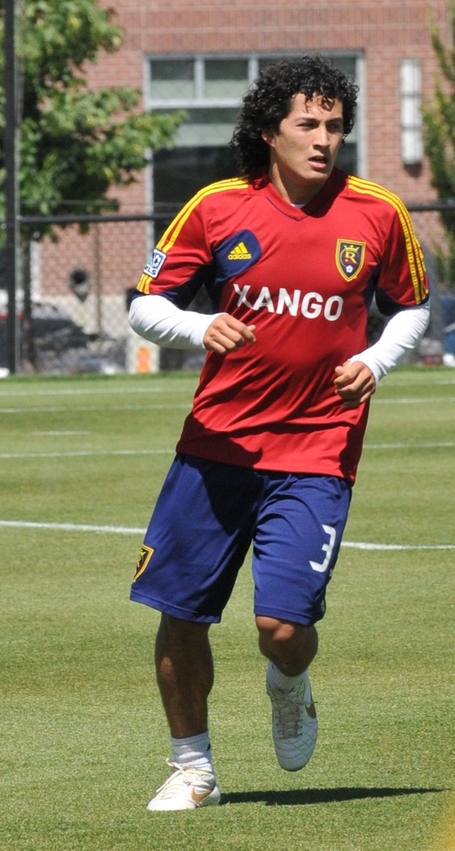 Of the handful of academy kids that was present at practice the standout again for me was 16 year old Jordan Allen, I have been impressed with both his work rate and his quality on the ball when I have seen him in practices or reserve matches. I know he is just recently back from a trip to Europe with the US U18 team, where he was called on to help out as a right back. You can read a great article and interview with him on ussoccer.com and while he has plans to going to college and likely playing for Virginia, one has to wonder what might happen if/when RSL offers him a contract? 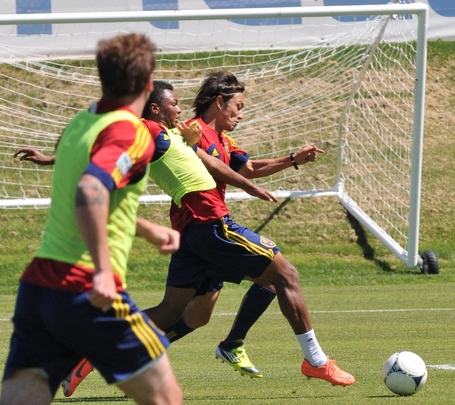 Jordan Allen battles with Terakazu Tanaka, who eventually took Jordan down on a play that would have resulted in a PK for sure. 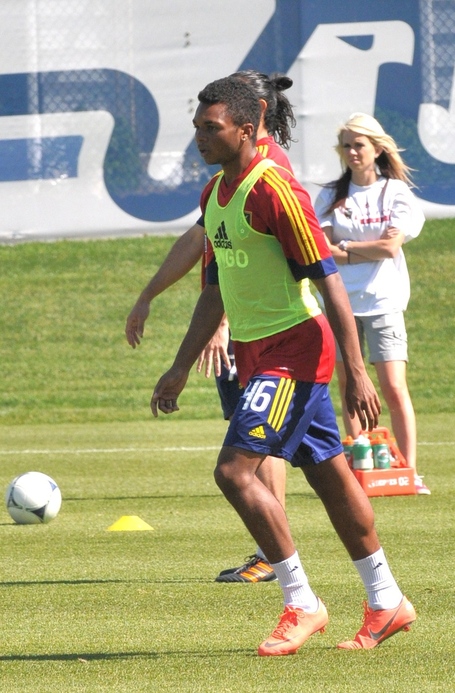 A better shot of Jordan

You can check out some more pictures on my google+ page.

For me one of the highlights of the practice was some of the work done by both Enzo Martinez and Cody Arnoux, both appeared to really be fit and active parts of all the action. I caught a great header that Cody put in the back of the net and hopefully we will get to see him in action soon. Enzo was active on both sides of the ball and while he hasn't cracked the lineup yet for the first team and may not this year, I still rate him as a great prospect for the future of the team.

I think with the number of injuries to some of our defenders that we have a bunch of guys who have a chance to step up their game, Tanaka, Chris Estridge, as well as the trialists currently with the team, how our back line looks after this summer will be interesting. One thing is for sure, we need to resign Tony Beltran, who I think is one of the very best in the league.

RSL's players will have the weekend off before getting back into action next week, with a reserve match against Chicago on Tuesday and then a return to MLS action on the 16th as they will head to the Home Depot Center to take on Chivas USA again. Coming off the disappointment in the US Open Cup, I have to expect that all the guys will be stepping up as the summer heats up.