My Liverpool FC vs Tottenham Hotspur Journey- Welcome to DC

Share All sharing options for: My Liverpool FC vs Tottenham Hotspur Journey- Welcome to DC

Well my plans to get an upgrade on my flight went the wrong way but still not a bad flight as we actually arrived in DC about 30 minutes early, it is a warm and humid day in the Capitol City but a quick shuttle and I was at my hotel, and while my room doesn't have the best view ever, if I walk a few feet to the end of my hallway and see this: 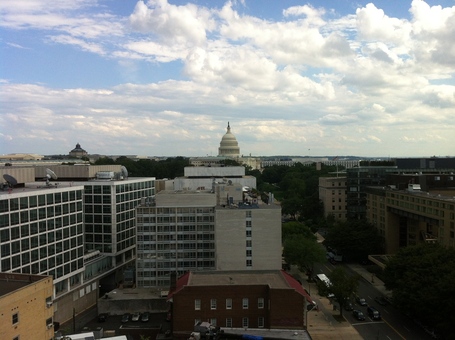 Yes that is the Capitol building just two blocks away. So it was still early and both the Real Salt Lake vs. Vancouver match and the opening ceremonies of the Olympics were a few hours off so I thought I would take a little walk to check out the Capitol area. So I put on one of my Liverpool t-shirts and hats and out into the rather hot and muggy day I went.

It was interesting to see how much of Washington DC is under construction, it appears that a trip here is probably much better planned for late next year if you want to do some sight seeing because everywhere I would go there was something being worked on.

more thoughts after the jump:

So beyond the construction it was good to see that tucked in between all of the national landmarks that footy was alive and well. I found a group of guys wearing Italy and Argentina kits playing some 5 v 5 in the Presidents Park just a couple blocks from the White House, none of them were Liverpool fans so I moved along quickly after saying hi to them during a break in the action. I also found these guys getting ready to play on the National Mall: 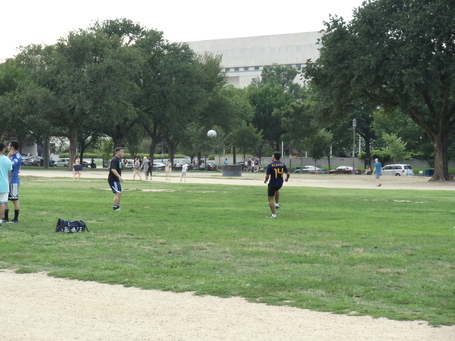 Just a few hundred feet from the Smithsonian Castle, there a few other groups of folks playing softball a bit closer to the grounds of the Washington Memorial, but it was just nice to see along with the many soccer jerseys and shirts that I would see along my walk that there was some actual playing going along.

Now with knowing that my hotel didn't have Direct Kick and that it was unlikely that any sports bars would be showing anything other than the Olympics Friday evening, I thought it would be nice if I could catch RSL playing on a TV at this really big house near the end of my walk but unfortunately, I was unable to get any closer than this as there was a whole lot of security around: 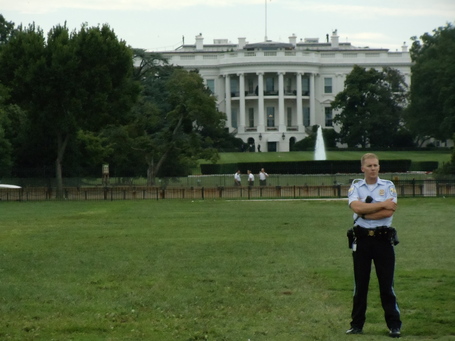 So not having any luck I headed back to my hotel to watch the RSL vs. Vancouver match on my ipad via MLS Live and to try and get a bit of rest before Saturday morning and my journey up to Baltimore for the big match. It is nice that my hotel is just a couple blocks from Union Station where I will catch the train up to Baltimore and then off to M&T Bank Stadium for the match. Oh wait I forgot that I paid for a little extra, not only did I get a great 6th row seat for the match, but I also got this: 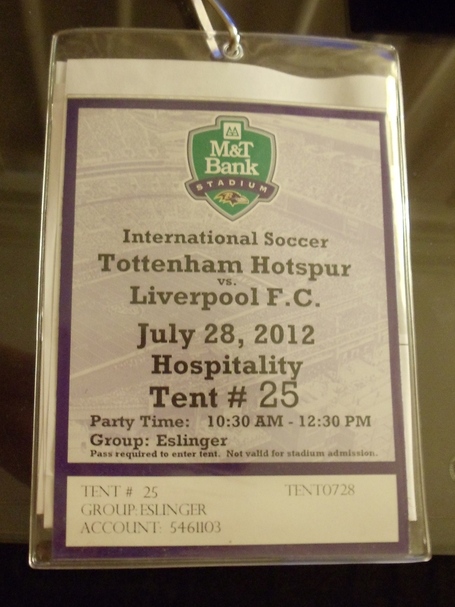 Which means that I will be heading up a couple hours before the match to catch a nice buffet lunch, free beer and a chance to catch up with some other soccer fans before the match. I was really hoping we would have some transfer news to celebrate but as of this post Clint Dempsey is still with Fullham.

Well it is early Saturday morning and I need to get ready to go catch that train to Baltimore soon, so I will leave you here and I will post some pictures from the trip up and match on twitter (@rslsoapbox) and on my google+ page, and then when I get home from the match a complete update with pictures from the match itself, as my journey to see Liverpool FC vs. Tottenham Hotspur continues. Hope to see you at the match.