Well it ended up a 0-0 draw, it was plenty hot and plenty crowded but still a great time. With over 42,000 people in attendance at M&T Bank Stadium it lived up to what you can expect from a preseason match. For LFC it was a reserve laden starting 11 with a few players like Joe Cole and Skrtel but it wasnt until late that we saw Steve Gerrard and even later before Andy Carroll would come on. Clearly the heat took a toll on players and plans, as you could see a lot of guys who were gassed very quickly.

The reality is that in a 0-0 draw it is hard for many players to impress other than keepers and defenders and a couple of them on both sides of the ball were impressive, for Liverpool I think Jose Enrique was very good in battling with Tottenham's Aaron Lennon, I thought Martin Skrtel showed why I think he is one of the best center backs in the EPL. I thought Liverpool's Jack Robinson showed very well in his 30 minutes. Lucas Leiva was very solid in his limited minutes, Tottenham's Gareth Bale took a fairly solid knock that would cause him to roll his ankle, he played on for a bit but eventually came off at the half. Oh and for the record I wasn't real impressed with Fabio Borini.

So I have to say the trip up from Washington was a bit of an adventure as the train was fairly full before all the soccer fans got on it, and I think the LFC fans held at least a 10-1 advantage on the ride up. A quick train to Baltimore's Penn Station, and then another quick light rail trip to Camden Yards and a little walk over to M&T Bank Stadium, which filled up nicely for the match: 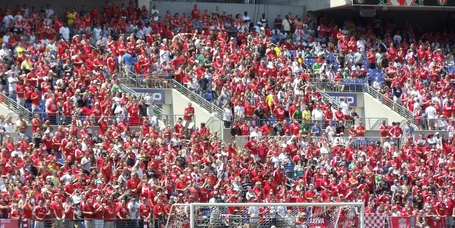 Some more pictures and the rest of the adventure after the jump:

So the stadium filled up to just over 42,000 folks, which clearly wasn't a sell out but was a very good crowd, I think it would be safe to say it was likely 7 or 8 to 1 in favor of Liverpool fans, even where I was sitting right behind the Tottenham bench. I was sitting with a fair mix of LFC and Hotspur fans, which was a lot of fun. I had to laugh at the people who kept getting mad at the people who stood a bit too long for the general public's liking, it reminded me of the early days at Rice Eccles for RSL matches. Here is what my view of the pitch looked like: 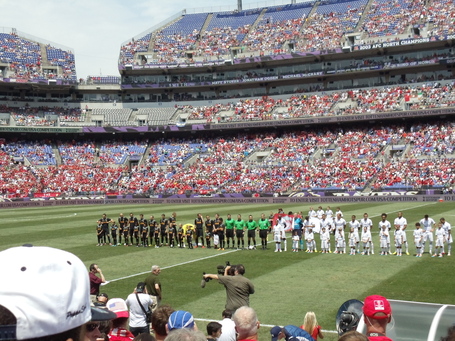 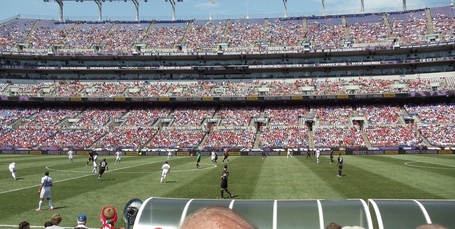 So as I said the match was fairly uneventful, perhaps the biggest cheers where when Steve Gerrard went to the locker room at the end of the first half and when he actually entered the match. 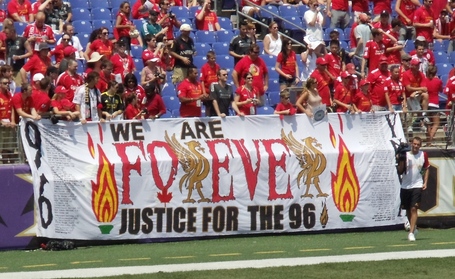 I also thought it was kinda funny when they did the bulk changes, so used to 1 or 2 guys, not 6: 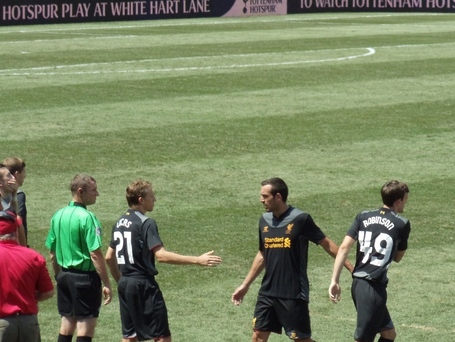 So as soon as the match was over the teams did the normal swapping of jerseys, and I noticed that some LFC players were wearing what looked like a sports bra, but it really is a monitor system that is probably similar to what Adidas will be rolling out next year in MLS, check it out: 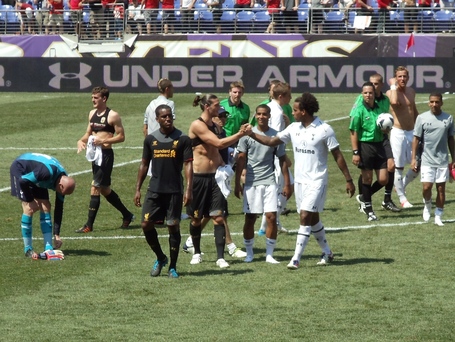 So then it was back on the light rail to Penn Station, and of course so many first timers were confused by both which direction to head and since this train didn't actually go to the station, myself and several others missed our stop and had to backtrack. Which meant I arrived 4 blocks from the station with just 5 minutes until my train back to DC was scheduled to leave, but Amtrack did me a favor and the train was bit late, but they kept delaying it more and more and by the time it actually left it was 45 minutes late. Still it was a quick ride back with a good number of fans of both clubs.

When I got to Union Square in Washington DC, I headed back to my hotel to take a shower (it was oh so hot and humid out all day), and I figured why not check on the DC United match against Paris St. Germain which was scheduled for 7:30pm. Sure enough I was able to jump on a bus and make it to RFK with about 15 minutes to spare. Now I had to pick up tickets when I got to the stadium and while my seats weren't as good, not as bad as I thought they might be, this is what my view looked like: 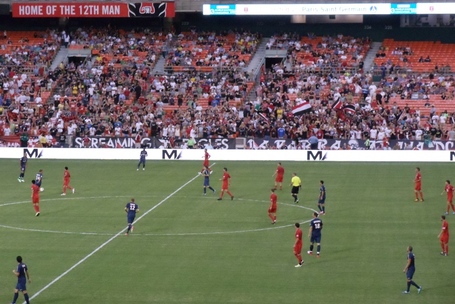 So I left with one major thought, D.C. United really need their own stadium, it is a shame they have to play at RFK.

Now this match ended up 1-1 but it was a quick goal by Zlatan Ibrahimovic on a spectacular move and shot, then shortly later the heavens opened up and it started raining and a quick thunderstorm sent both teams running for cover as some big time lightning and thunder rattled the stadium. After a bit of a delay it was back to action about 45 minutes later, and a PK goal by Dwayne DeRosario tied the match up at 1-1. Entertaining for sure, but it just seemed to lack the excitement of Liverpool's match, but that I am sure was my personal preference.

Anyhow, 14 hours after the day started I made it back to the hotel and was able to get this update done. I hope you enjoyed my little trip as much as I did. Oh and my scarf collection grew by 2: