RSL stops their skid, for the Sounders not so much - my thoughts & pictures

Share All sharing options for: RSL stops their skid, for the Sounders not so much - my thoughts & pictures

Well if you needed to know anything about the 4th of July match between RSL and the Sounders it is that both sides looked a lot more concerned with not losing than they did with winning. Perhaps the Sounders a bit more than RSL, as their slide without a win continues. Now that being said, it was fairly clear that the Sounders have taken a more defensive minded approach to matches on the road lately than in the past, their 1 shot on goal, just 245 passes, and under 35% of the possession tell you a lot about the tactics used by the boys from Seattle on Wednesday.

Still it was effective as RSL was unable to find the back of the net and despite having over 65% of the possession, completing 86% of their 490 passes, were able to get just 3 shots on goal and 11 shots overall. It was another night when it seemed RSL was trying to find the perfect opportunities as opposed to taking the opportunities they were given. When facing a young, very unproven keeper, I would think you would be firing shots from any and everywhere, and RSL did that very early in the match but then fell away from it as the match progressed.

I guess this is the point where I say, we got robbed again. Well if you watch the replays of the Alvaro Saborio goal that was taken off the board for an offside call, you can see a call that changed the match:

more thoughts after the jump:

So for Real Salt Lake it was a very interesting night as they made a couple of changes from the Columbus Crew match, including the debuts of two defenders as both Kwame Watson-Siriboe and Kenny Mansally were in the starting XI and has been the case often this year with debuts, neither disappointed. In fact despite picking up a shoulder injury early in the match I would say that I agree with most people that Kenny Mansally was the man of the match. Kwame, also proved that he may have been a real find, but time will tell as both of them look to become a regular part of the RSL family.

Nick Rimando was forced to make one save and he made it, hard to find any fault with that performance and to his credit Nick played some great long balls in attempts to get behind the Sounders back line and while none of them resulted in goals, they sure gave the Seattle defenders yet another thing to think about.

Maybe it was playing two new players but both Chris Wingert and Nat Borchers seemed to pick things up a bit on Wednesday and the result was the the RSL defense was rock solid and really gave the Sounders attack very little opportunity to do anything positive. The clean sheet credit will go to the keeper but it is clearly a team effort and our defenders played a huge role in doing what was needed to make it an easy night for Nick.

In the midfield we saw a bit of change as Luis Gil found himself starting on the opposite side of the diamond from Will Johnson with Javier Morales at the point and the returning Kyle Beckerman assuming his role as captain and the defensive stopper for RSL. While I give Nick and the backline a lot of the credit for the clean sheet it is important to acknowledge how hard the RSL midfield worked to support the defensive efforts, applying a lot of direct pressure on the ball higher up the pitch than in some recent matches and have a bit more bite to slow down the Sounders. The passing was very good on the night, and while a couple of opportunities were missed or not taken in looking for better ones, it was clear that we gained a big advantage in the middle of the pitch due to hard work and a lot of effort. If I have a negative I think it would be that I would like to see the guys in the middle do a bit more positive passing and attacking runs than looking for the backwards outlet or trying to stretch the Sounders players out. I know that is tough when you have an opponent who is really looking to slow things down and drop numbers behind the ball, but too many passes were going backwards for my liking.

It was good to see Ned Grabavoy get back on the pitch and while he looked a bit shaky early on, he quickly shook off the cobwebs and got back to what we like to see from him, some good runs and some great outlet passes. Jonny Steele came on with about 10 minutes left and did his part to try and spark some energy and provide some juice to the offense as they tried to crack the Sounders and find a late goal, it just wasn't meant to be.

Up top I thought Fabian Espindola again showed the quality and work rate that makes him one of the unsung and under appreciated forwards in MLS, from the runs trying to get on long balls played out of the back, to his willingness to take defenders on, he was able to make sure that the Sounders had to keep a very close eye and a couple bodies near him all night long. I thought Saborio scored the goal which should have given RSL the win, he also had a couple other of chances but I still am driven nuts by how casual he is when getting back onside after runs. I also think that as the Sounders when to a more defensive style of play that Sabo seemed to turn off a bit, and I wonder if a bit of fatigue might be setting in, we have to remember that he is now the only RSL player to play in ever RSL match so far this season.

So we saw a return of the defensive effort that we like to see from RSL, it did come at a bit of a cost as the offensive chances weren't as numerous as we probably would like. The only real negatives for me are that I would like to see a bit more aggressiveness from our midfielders and forward to make the opposing keepers have to work harder and I would love to see us make sure we plant at least one player at the top of the area when Fabi or someone else makes a strong run at the opposition defense.

How about some pictures 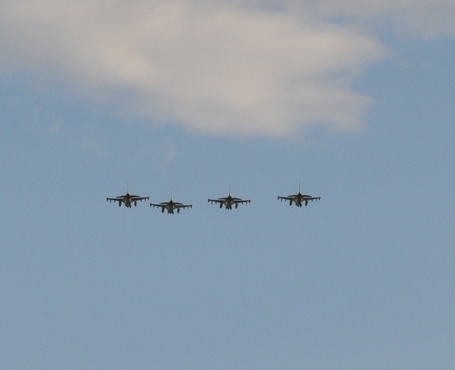 Nothing says the 4th of July like a fly over 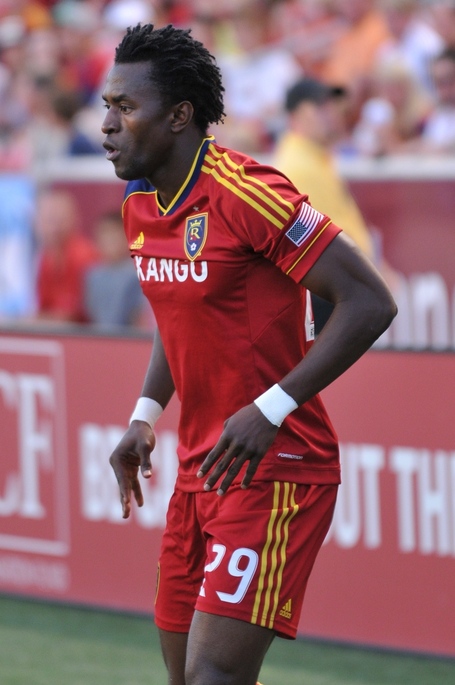 I think Kenny Mansally brought great energy and quickness to the pitch and I hope he is able to quickly get back to full fitness after hurting his shoulder on Wednesday. 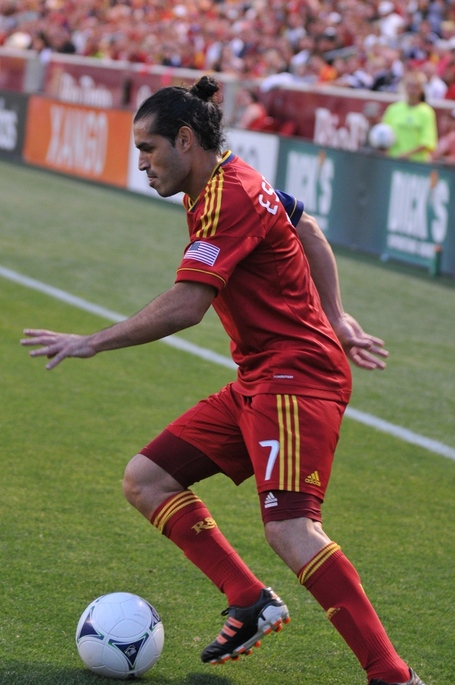 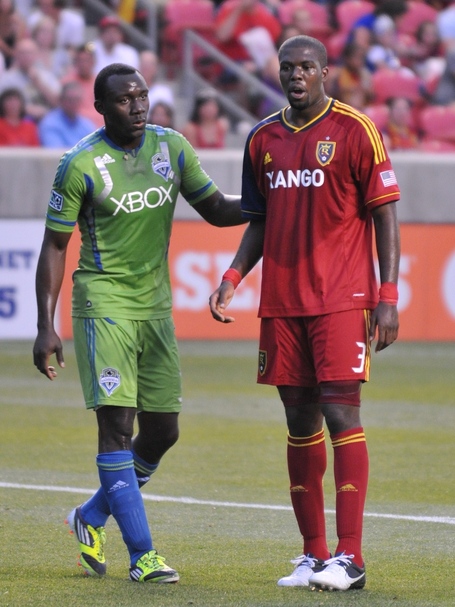 Every time Kwame came forward for set pieces the Sounders made sure someone quickly became his close personal friend. 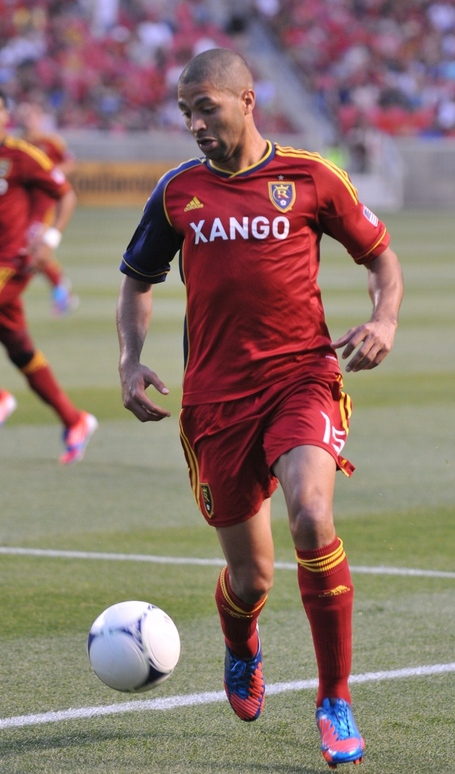 I know sometimes RSL fans miss the runs that Sabo makes, but he really does make them. 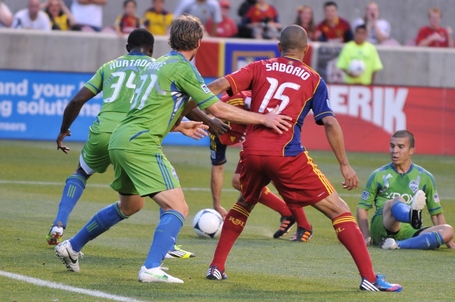 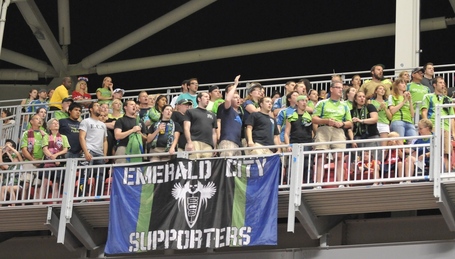 I love that even in the middle of the week the Sounders have a great traveling fan base.

If you want to see more pictures from Wednesday, check out my google+ photo album.