It's never a bad thing when managers are faced with difficult decisions because players vying for one spot impress in equal measure, and Jason Kreis is sure to be facing just that. When Real Salt Lake takes on Colorado Rapids on Saturday, with Javier Morales returning to action, somebody will inevitably drop to the bench. It's an unenviable position.

It goes without saying that Kyle Beckerman has successfully locked down his place, and whether that is for the remainder of his time at the club — however long that may be — or not is difficult to say. Regardless, he starts on Saturday, and there's nothing likely to change so long as he's fit. Ned Grabavoy is likely to start, too, as he's both an important player for Real Salt Lake and in good form in his three matches this season.

Javier Morales is the first big question, as he's still listed as questionable in pre-match considerations. When he's fully fit, he's essentially a lock to start: He's one of the best attacking midfielders in the league, even if he has, as some say, dropped a level. I'm not convinced he has. He's only played 30 minutes in our first five matches, but this could be an opportunity for him to start.

The remaining spot, should Morales be deemed fit to start, falls to one of Sebastian Velasquez and Luis Gil. It would seem there is genuine competition for that spot, and the two players offer some very different qualities worth consideration. 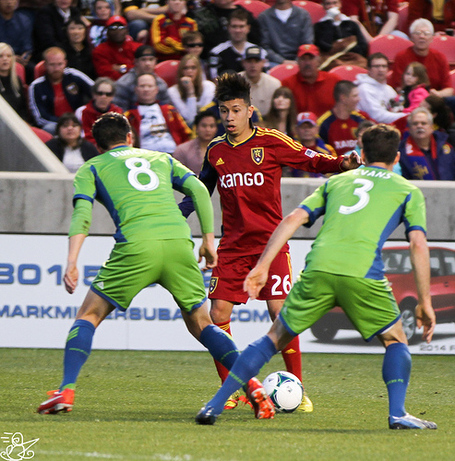 Velasquez offers an uncanny ability to keep the ball, and it's no surprise that he finds himself in a few more duels than most players in MLS. In fact, he's leading RSL in duels won, with 34 — the twelfth most duels won in the league.

He's turned his eye toward shots a bit more than he had last season, though it's worth noting that he's only 43 minutes away from equaling his minutes contribution in 2012. It's telling that there's no hesitancy about his play: Some young attacking midfielders might be more hesitant to run at players ten years their senior; Velasquez relishes the opportunity.

Velasquez has been in good form, and he's shown very well in attack. There might be some concerns that he's not the most tactically able midfielder, but he's shown willingness to jump back into defense when necessary.

He still has a big learning curve to go through. It's easy to forget when a player creates such exciting play. But there are certainly times when he'd be better served by playing a simple ball rather than running at a man, and he'd probably benefit from a calmer head at times. 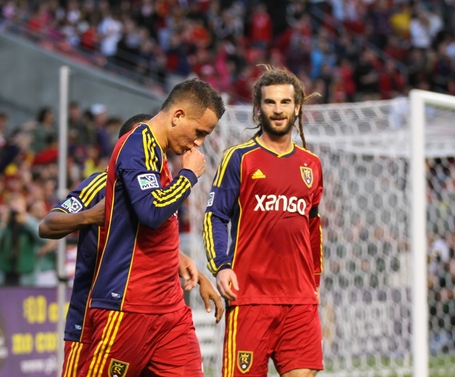 Gil offers more composure on the ball than his rat-tailed counterpart, and he has the more immediate benefit of having scored in the last match. That was a top goal, and it made a significant difference in the match.

It's easy to discount Gil's ability with his head, particularly because he's not the tallest of midfielders, and he's still quite young. But that headed goal had fantastic technique behind it, and that's representative of what Gil brings to everything he does. Where Velasquez brings raw skill, Gil brings a bit more refinement.

That composure and control is incredible for a young player with his skill set. Gil plays well above his years — he's only 19, after all. It's easy to forget that — especially as he's been a regular since the dark, Javier Morales-less summer of 2011.

He's also leading RSL in key passes in the early goings with 8 in nearly 400 minutes; Ned Grabavoy is quickly approaching, with 7 in just over half of that time.

At times, Gil does fail to really inject himself into matches, whether they're difficult ones or on the easier side. Saturday wasn't a bad match for him, but he had a rather low 71 percent passing success rate. He did come off for Javier Morales, so the frame of comparison isn't exactly one-to-one.

Regardless, Jason Kreis will have his work cut out for him on Saturday and in the coming weeks. Will he go for the raw ability of Sebastian Velasquez, or will he opt for the composure and consistency of Luis Gil? Or will, instead, he bring Javier Morales into the match to assert his influence from the bench?