Share All sharing options for: RSL's 4-3-3 experiment shows potential but falls flat in win over Toronto

When yesterday's lineup was announced, I think we all raised a few of our eyebrows (or both, or perhaps one) as it showed Real Salt Lake playing in what appeared to be a 4-3-3, and as the match progressed, that was certainly shown to be the case.

But despite grabbing a first win in Canada, there was a sense that something didn't quite click in the side. Too often the forwards were left on on an island, and there should be questions asked about that.

Let's look first at the distribution involving Devon Sandoval. This chart represents passing to and from Sandoval, so, for instance, when you see a connection from Beckerman to Sandoval, the thickness of the line at each base represents the number of passes from that player. We see in this chart that distribution to Sandoval was relatively slim, and there really wasn't any action to speak of between either other forward and Sandoval. 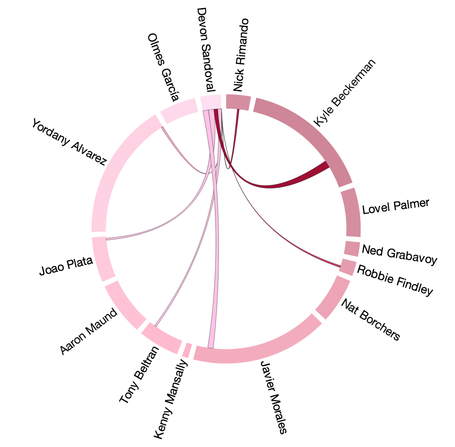 Let's look now at Joao Plata, who was considerably more involved than Sandoval. We see a fair few passes going to him from Kyle Beckerman and Javier Morales — this is not surprising, really. With only three midfielders in the side for most of the match, feeding Plata and pushing play to the flanks. 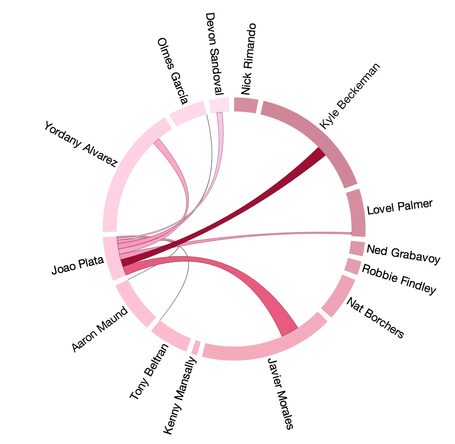 Here, we have Olmes Garcia's passing chart; we here he was more involved in passing with the full back on his side — Tony Beltran — but was more isolated from Devon Sandoval. There are positives and negatives here: On one hand, unlike Plata, the full back on Garcia's side is getting forward well and involving him in play. On the other hand, we see Sandoval increasingly isolated, and this makes things difficult. 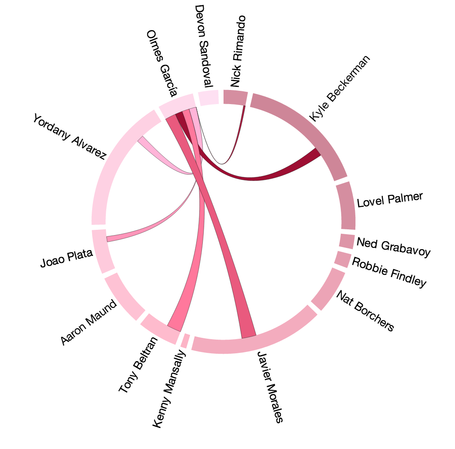 While we were perhaps more consistent in wide positions, we lost something in the center, and we lost something in the midfield. Should we want to try it again, a few things should change. One, both full backs have to be involved with the striker on their side. Beltran demonstrated this well with Garcia, but Palmer did significantly less so with Palmer. This allows the midfielders to make more effective runs and receive the ball in good positions and get Devon Sandoval involved.

Two, Devon Sandoval must drop into deeper positions to receive the ball, allowing him to play in the wide forwards in better positions, which could allow them to cut inside and find either a midfield or Sandoval run, or to create a goalscoring opportunity for themselves.

As a third point, one of the two midfielders should serve more specifically as a linking midfielder; neither Alvarez nor Beckerman serve this role, particularly. Someone like Ned Grabavoy serves this role especially well, but the first two factors must be addressed before that really has a chance to make a difference.

It wasn't a bad performance particularly, but the lack of genuine chances and the general isolation of the forwards should lead to some substantial questions about the feasibility of the formation with our squad.

* Charts are from MLS Golazo beta.