Ned Grabavoy's second-minute goal against Colorado Rapids came swiftly; let's take a slower-paced look at it and break down how we scored this one. It's a fantastic team goal, and Ned's finish, though a bit unconventional, capped off some lead-in intuitive movement.

It all started from a throw-in just past the midfield line in the attacking half: Lovel Palmer takes the throw-in and finds Javier Morales very close to the ball, who then finds Robbie Findley with a short lobbed pass. A fine pass indeed, but Findley is in a difficult position and it's a hard ball to control. It should be noted that Findley does so without issue. He has three men essentially blocking his passing options, so his first course of action is to drop with the ball.

This is where we first see Kyle Beckerman starting his run. He comes into the move later in a vital role, but for now, he's moving to provide a passing option for Morales. Note that Luis Gil has stayed up top and is occupying a midfielder and a left back.

Beckerman has moved to receive the ball and Javi lays it off with ease. He quickly sees Luis Gil having moved into an open position — that he was allowed to do this is criminal defending, and not the sort of criminal defense one might go to law school for. No, this was much more dreadful. He plays in Luis Gil now, who has shifted further to the flank. Note that Beckerman continues his run. Not every defensive midfielder would do this — very few, indeed. 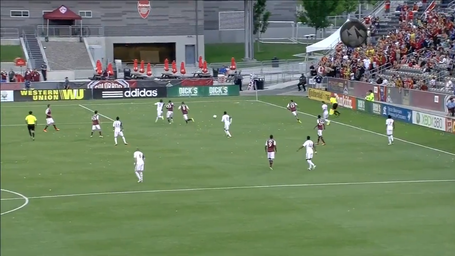 Gil plays a pass perfectly in front of the defense for Beckerman to run on to — with the defense having to turn to catch RSL's anchor (a term I use rather loosely), Kyle has no problem picking up the ball. He's quick on the ball and quick with his head, so what comes next shouldn't be surprising — but it sort of is.

Kyle swings a cross expertly between the defense and the goalkeeper, having spotted our runner, one Ned Grabavoy. Indeed, if you scroll up a bit, you'll see the midfielder lurking just behind the defense. He spots Beckerman's run and moves in parallel with him. He doesn't have much time for a shot, and in the end, he just simply knocks it in with his legs in a most unorthodox fashion. No complaints here: A goal's a goal, and this one's a brilliant one.