Soccer in Utah: a watershed decade for American soccer is hindered by war, economic decline

The next installment exploring the history of soccer in Utah focuses on the pre- and post-war years of the First World War. The organizing and formalizing of the game in Utah both helped influence the national soccer authorities to restructure and apply for international membership, as well as endure the long absences of play during WWI. And on these foundations, buried under the ashes of war, the next era of football was built.

Share All sharing options for: Soccer in Utah: a watershed decade for American soccer is hindered by war, economic decline

The second decade of the 20th century opened with the status of the sport in Utah in flux; it would end much the same way.

On one hand, progress was being made by the formalization of competition via the Daynes and Schubach Cups. Professionalism was just beginning to enter the sport as some of the companies that fielded teams in the State Championship were now contracting foreign talent to aid their successes (for example, Salt Lake AFC hired a Scot by the name of Alex "Sandy" McWhirter). And the popularity of soccer was growing in such a way that there was now demand for chronicling matches and competitions in the news; the first of which was William Service of the Salt Lake Herald.

On the other hand, the rise of other sports such as American football and baseball put pressure on soccer not only in Utah but across the US. The sport also had difficulty in growing beyond the various companies and organizations that were playing for the previous decade. New teams emerged in Northern Utah, but outside of the mining communities, some university programs, an Army regiment at Fort Douglas, and certain factory teams, soccer's growth was non-existent. And the biggest of obstacles during the period, The Great War, put a halt to the sport even being played. This last challenge would hinder and even destroy much of the rapid growth that was experienced in the first part of the decade.

Preparing the Watershed in Utah 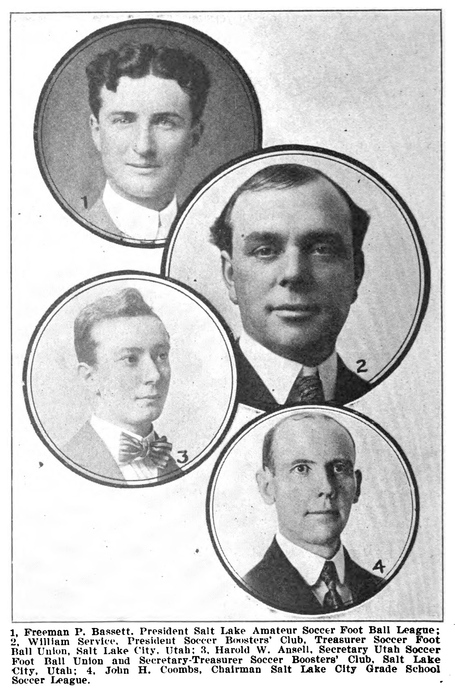 Friday, January 14th, 1910, was the spark that ignited the future passion for soccer in Utah. On this date, the aforementioned William Service led a group of "association football enthusiasts" at a meeting at Gibson's Cafe at 63 East First South Street (presently part of the City Creek mall complex) in an effort to organize the sport in a formalized way within the state.

What instigated this meeting were several national articles written on the sport, in addition to a planned exhibition match between the University of Chicago and the University of Illinois scheduled for the autumn of 1910 which was designed to further promote the sport on a collegiate level. It was somewhat simultaneously and independently arrived at across the country that marketing the sport to school-aged people (both on the university level and in public schools) would do well to serve its growth. The pitch being it was a safer alternative to American football while being just as interesting as the very popular baseball.

There were dissenters, however. The Salt Lake Herald noted the same week of the meeting: "Some ‘wise guys' have said it [soccer] is not manly enough and too gentle, owing to the fact that there is small chance of half killing a man, under the rules." It's to be noted that at one point the LDS church banned American football from its campuses for being too violent. This obviously helped cultivate an interest for a less-physical sport.

Fortunately for Utah soccer, the meeting was a huge success and, by all accounts, very well-attended. The outcome was even better. It was decided that fans of soccer in Salt Lake City would create a booster club named the Salt Lake Soccer Football Boosters' Association. The goal of the "Soccer Boosters" was to hold a series of exhibition matches throughout 1910 around the Salt Lake Valley, encouraging the public to come out and watch in hopes of convincing them of the merits of the game.

After a series of open practices in the valley, the first of these exhibitions was played on February 22nd. Little was publicized about the match, but it was followed by another played on March 5th at the Eighteenth Ward square in Salt Lake City between the "Blues" and the "Reds" of Granite High School. But perhaps the most important of these exhibitions was played on March 26th, this time at Granite High School in South Salt Lake between the "Blues" and the "Whites". Like the booster meeting in January, this game had a large crowd and was vital to getting various public schools in the area to adopt the sport as an auxiliary to American football. 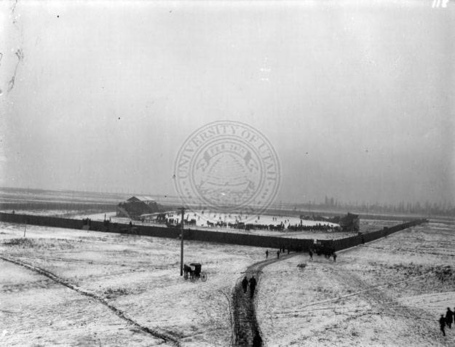 In only a little over a year after this promotional campaign, soccer was recognized in Utah for being a staple in the majority of public schools (culminating in the creation of the Salt Lake City Grade School Soccer League), and almost all of the colleges and universities in Northern Utah at that time. Among these post-secondary schools were Weber State University in Ogden, Brigham Young College in Logan, and the University of Utah. Brigham Young University would follow suit in adopting soccer the following year.

This type of adoption at younger levels undoubtedly helped the game's future in the state, and grow it beyond the conventional company-sponsored teams. But something was brewing on the national level at the same time all of this was taking place, and it would be crucial to the American version of the game being taken to the international stage.

The Watershed Bursts onto the National Stage

A week after the inaugural Salt Lake Soccer Booster meeting, it was announced that there would be a concerted effort to form a national governing body that would unite all clubs and leagues throughout the country under a single controlling organization. 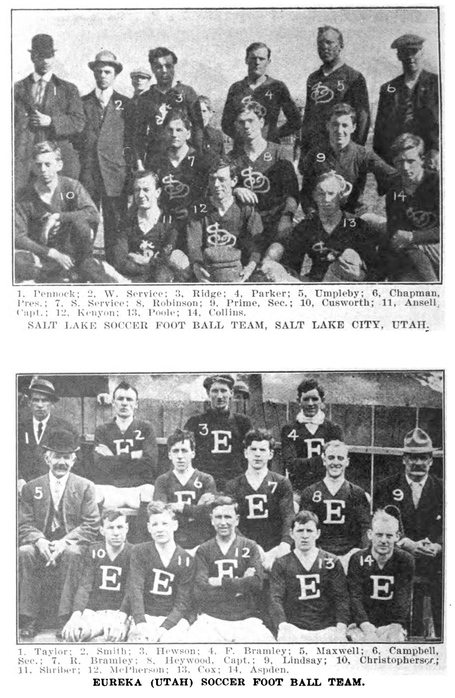 The reason for a single entity of control had its roots in international football. At that time, few countries had a single federation governing its leagues and clubs. In an effort to bring the international game more in line with standardized forms, the International Football Federation (FIFA) required each nation to create a national governing body for admittance into the organization as a member. Both the AAFA and the AFA recognized that their control was limited over such a vast expanse of geography, being that both were centered along the east coast (New York/Boston/Philadelphia) and central midwest (St Louis/Chicago). The two chose to set aside and/or reconcile their differences by forming the USFA, thus becoming only the second association in the Western Hemisphere to be admitted to FIFA, the first being Argentina.

Although the USFA was not formalized until 1913, its inception had effects throughout the country. Most notable of these was the institution of the US Open Cup (known as the National Challenge Cup in the early years) which held its inaugural tournament for the 1913-1914 season.

Utah soccer fans, both past and present, can take pride in knowing that the local expansion of the game in a then-remote area of the country aided in the creation of this truly national association.

Dawn of a New Era in Utah

During and after the formation of USFA, Utah soccer kept a steady course as they pulled themselves up to the levels of the rest of the country. The sport had broken through the Wasatch Range and into the highland areas, especially in Carbon County. A Carbon County league was started in 1911, featuring teams from Price, Castle Gate, and Sunnyside. These teams would go on to challenge the more established clubs along the Wasatch Front for the Daynes Cup in the coming years.

In addition and just prior to events in Carbon County, the winter of 1910 saw competition in Salt Lake expanded beyond the State Championship. Alongside the Daynes Cup for state champion, five Salt Lake City teams initiated their own efforts to form a strictly-city league in the winter of 1910 -- Salt Lake AFC, Fort Douglas, Garfield United, Oregon Short Line Railroad, and a new team sponsored by the Building Trades Union. 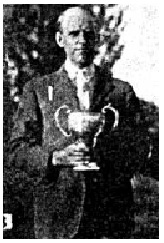 The soccer season of the day was on a fall-to-spring schedule. The Daynes Cup (created by Daynes Jewelers) was the trophy for the spring portion of the season. Sensing an opportunity, Schubach Jewelry (a fierce business rival of Daynes) created their own trophy -- the Schubach Cup -- for the fall season champion. A revival of the powerhouse Eureka saw the miners win the inaugural cup in 1916, sweeping the fall series. America's 1917 involvement in WWI put the new trophy on hiatus for two years, but it was resurrected for the 1919 fall season. The Schubach remained a main trophy up through the 1930s and possibly beyond. At some point afterwards, however, the physical trophy disappeared without a trace. It has yet to turn up.

Despite the immense prosperity of soccer during the years 1910 thru 1914, the close of the "teens" would result in the unsettling of the sport as a whole. World War I placed a de facto hiatus on all matches, virtually the world over, until its end. The destructive forces of war both physically and on society and culture could most be felt in the sport of football. It having grown to be a truly global game, there's no uncertainty that humanity's first global conflict would disrupt it. Indeed, the stunting of global soccer during the war could be a tangible indicator of how destructive such conflict can be to cultural and societal aspects of civilization.

With all of the detrimental effects of the Great War on soccer, Utah's version of the game had a viable, albeit unknown at the time, path into a bright future. That path would stem from an unlikely, yet quite poetic, origin: the confinement and imprisonment of German/Austro-Hungarian immigrants and POW's during the war.

The continued use by the Army of Fort Douglas in Salt Lake City (and it's remote location on the continent) made it a prime location to house these foreign prisoners. While in confinement and after their release, these prisoners played the sport rather liberally, even forming athletic clubs during their internment.

As is often the case in these situations, many of the POW's, fearing the worst in their ravished home countries, decided to stay after their release. The athletic clubs they formed continued as a staple for the ethnic groups within their new communities. And this new injection of ethnic diversity helped to draw other immigrants to the state as well.

At the same time, the economic hardships across most of the country meant rural areas in Utah (where many mining communities were) had little time for recreation outside of their laborious jobs. The cities were different, however, and the sport was consolidated in these areas, chief among them Salt Lake. For a few brief years rounding out the decade, soccer was relegated to weekend matches and scarce practices; a strictly recreational pastime.

The period immediately after the war saw the emergence of teams based solely on foreign immigrants and ethnic communities. While slow to become formalized, these clubs would come to dominate the Utah soccer scene for almost 15 years. Their names should ring more resoundingly than they do given their status in the football community: Salt Lake Caledonians, Hollandia, Vikings, Arthur Rangers, and Germania. But they weren't the only newcomers. Ogden Blue Pines, Rio Grande Railroad, and Utah Copper would also seriously compete for the Daynes and Schubach Cups.

None of this would come to pass until the 1920's, the boom years of American history, when soccer would reach and surpass their previous heights during the pre-war years. The blow from World War I may have hindered soccer's (and society's) progress, but the next decade would be defined by the mingling of international blood on American soil.