Aggregating the info about the rumored Oceanside academy sites

Share All sharing options for: Aggregating the info about the rumored Oceanside academy sites

The last couple days have been a whirlwind of activity surrounding news of Real Salt Lake owner Dell Loy Hansen's interest in establishing not only a USL-PRO team but also an academy in Oceanside, California. The following is a rundown of the info I've dug up over the course of the day on the subject, including potential alternative sites to the Goat Hill golf course location.

The Goat Hill site is currently a city-owned property adjacent to Interstate 5 on its east side. The golf course has been in existence for 61 years, has apparently garnered considerable respect with the local golfing community, but has been neglected by its governmental owners. The aerial image below illustrates how poorly maintained the facility is. 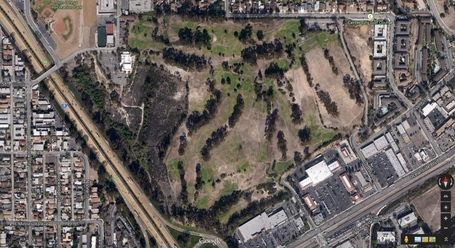 With news today that Oceanside city council has chosen not to go with Hansen's proposal (which included the soccer stadium, practice fields, academy grounds, a reduced-sized 9-hole golf course, and two hotels), the door is open for the property to be used for the previous plan by local clothing designer, John Ashworth, to renovate the 76-acre site to its original beauty and add a botanical garden and community farm.

The local CBS affiliate article (linked above) also reported there are two additional sites within the City of Oceanside's limits that Hansen has been looking into. The first is the Pavilion -- an 84-acre site that is primed for a commercial makeover which would include features such as a theater, health club, and other high-end, luxury outlets for all your SoCal shopping pleasures. The white circular point on the aerial below shows the site's location. 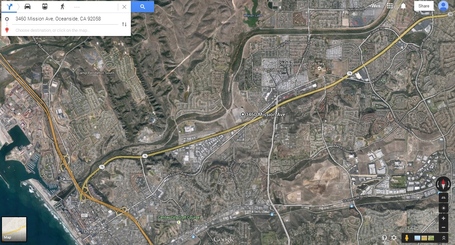 How Hansen's plan for a full-tilt soccer facility (with a rumored 5,000- to 8,000-seat stadium) would factor into the existing plans for development is a mystery right now. As far as I'm aware, nothing has been built on the property yet, and as of Fall 2012 the site was still in its existing condition -- that is, a derelict, multiplex drive-in movie theater.

The second potential site Hansen's been rumored to be looking into is El Corazon. Currently sitting on this massive 465-acre plot is Oceanside's compost facility along with the El Corazon Senior Center. Both facilities are city-owned, and there is an existing proposal for a renovation of the entire property. The renovation's masterplan would include 212 acres of parks/recreational use (comprising a "Soccer Field of Dreams" complex with 13 footy fields), 164 acres of natural habitat, 34 acres of civic services (likely to be a redone senior center), and 55 acres of commercial and hotel. 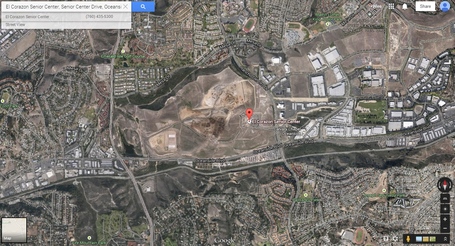 Obviously Hansen's plans would displace a large chunk of the proposed elements of the City's masterplan. The advantage here is that the property is large enough to accommodate a vast, mixed-use development that would fit what many in Southern California would consider a dream for their children in a residential sports academy.

The City of Oceanside actually offers a great locale for a potential team. It's surrounded by four major highways: Interstate 5 that runs along the coast in this section; Highway 76 through the north town that connects I-5 to Interstate 15 to the east; I-15 which heads north into Riverside County and south to San Diego proper; and Highway 78 through the south town that links Oceanside and Carlsbad with Escondido to the east. All sites have easy access to these four routes, with Goat Hill and Pavilion being directly adjacent to two of them.

Camp Pendleton (the US Marine Corps base) borders the north side of the city limits. With many marines looking for activities to do on down time, one would suspect having a professional sports team in the area might be a good draw.

Below is a simple interactive map I've created illustrating the three properties in relation to each other, the city and county limits, and how the Los Angeles Galaxy/Chivas USA homegrown boundary factors in. Zoom, click, explore, enjoy, and share.