Luis Gil scored a scrappy goal on Saturday in Real Salt Lake's 3-0 win over Toronto FC, but the build-up was anything but. We take you through one of our prettiest ugly goals of the season. 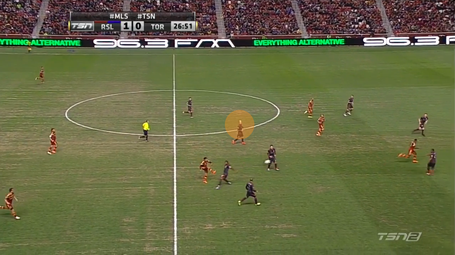 In our first shot, Luis Gil is in defensive third, and he's played Morales in here. Morales sends the ball forward, winning a throw in a good position - just around the upper edge of the middle third. Michael Bradley is highlighted in orange here; our movement around him is interesting and highlights the depth of our attacking play. 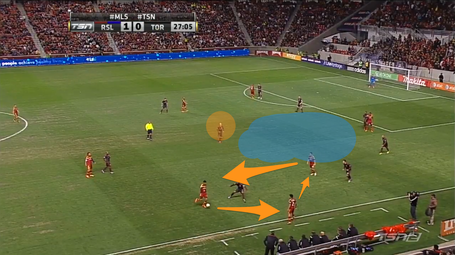 Tony Beltran takes the throw-in quickly and efficiently, finding Morales; a triangle emerges with Beltran and Luis Gil. This is one of Beltran's most important attributes for our side, because it adds natural midfield width where none is otherwise present. The effect during combination play draws midfielders out of position, and here, you can see Michael Bradley is coming to mark somebody - who exactly that is, we don't yet know, but smart money is on Javier Morales. 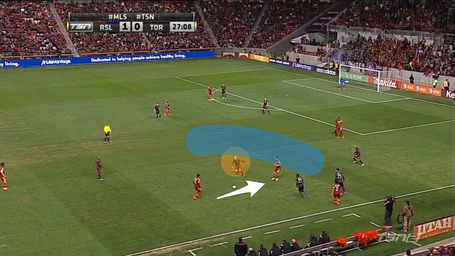 This next shot is separated only by a few seconds, but Beltran stepping forward and Gil tucking in draws two defenders away, leaving Bradley on Morales. Morales and Gil again combine, as with Bradley blocking the forward run with the ball from Morales, we need to free up space. 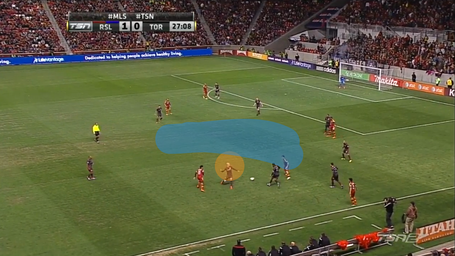 The quick pass from Morales and an even quicker one from Gil frees up that space we needed. Michael Bradley is caught reaching for the pass - and rightly so, because it was going to pass him by. 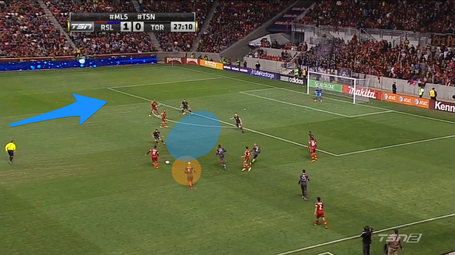 Javier Morales receives the ball and runs inside - not just straight - and he's lost Michael Bradley. No midfielder has stepped to cover the space for Morales, giving him time and space to operate. They have cut off passing lanes well, leaving one clear option. 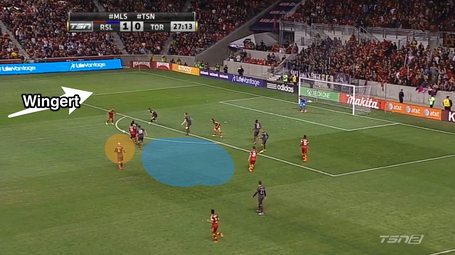 Morales flits around a player or three, then fires off the pass. It first appears to be intended for Alvaro Saborio, but he dummies it and Chris Wingert makes a bursting run from the back. Keep in mind, we haven't seen him in this area yet, and it's safe to assume - given the outcome - that Toronto didn't, either. Notice also just how much space Luis Gil has - the defenders are dangerously ball-watching. 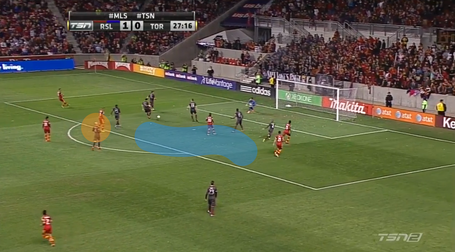 Wingert sends a low cross in, and it takes a deflection in the area. A perfect cross might not have found anybody, but Olmes Garcia was in a good position to capitalize. Again, look at the lateral space Gil has access to. A single step to the left and he's completely free. Two are marking Grabavoy, and two are just lost in there. In fact, you've even got a player strolling back from the attack on their left flank. 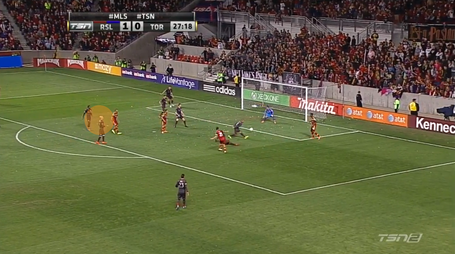 Luis Gil finishes. It takes a bounce, but it doesn't mitigate the tactical qualities of the build-up. Each movement further back in the sequence pulled somebody away from the player on which they were focused, and this leads to a great opportunity - and a goal.