I know we've been putting it off, but it's time to talk.

That corner on Saturday? You know, that last one? That wasn't good enough. We all know it, and we know you don't feel any differently.

But that was some of the worst marking on a corner I've seen from our side. Probably ever. We didn't concede a late goal because a player lost his mark, or a player was ball-watching. We conceded because we were absolutely awful in organization.

Take this shot from just before the corner is taken as an example. 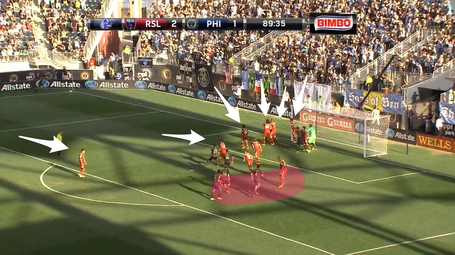 I know Chris Schuler is brilliant - he's one of the best defenders in the league - but that's an awful reason to let him mark three players. We have Kyle Beckerman floating in space here. Ned Grabavoy looks like he's defending a throw-in. Sebastian Velasquez is on the near post, but nobody's on the far post.

And it doesn't get better from there. Nat Borchers and Devon Sandoval are both marking Conor Casey. 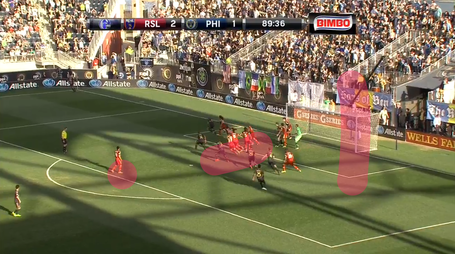 Then the ball actually comes in. Alvaro Saborio, Chris Wingert, and Kyle Beckerman all go running for Amobi Okugo, and the ball goes right over them and lands on the head of Maurice Edu. He's completely unmarked because three players have spotted Okugo making an unmarked run. Chris Wingert has lost his mark here, and as a result, Alvaro Saborio loses his, too. Kyle Beckerman picks one up, but it's the wrong one. Chris Schuler is still left defending three players. Javier Morales is floating at the top of the box, but he's not going to do any good there. Nat Borchers leaves Sandoval to mark Conor Casey, coming over because he sees Edu's unmarked. He gets a point for that.

When we have gripes about dropping points, this is why. Yeah, we don't have a reason to panic - not at all. It's early days and this is something that can be improved upon. I'm certain it will be. But if this sort of defense continues, we'll be in serious trouble.