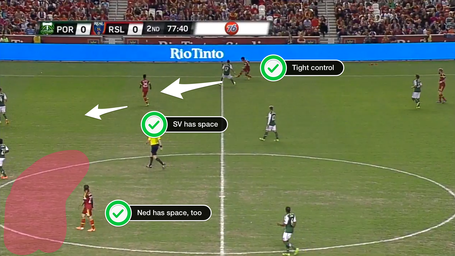 In our first shot, Tony Beltran has controlled the ball well under some high pressure, and he's sought out Sebastian Velasquez with the pass. Velasquez has lots of space in front of him, with Portland content to pressure only the player with the ball. Vital here is the space Ned Grabavoy has in front of himself - Diego Chara is focused elsewhere, giving Grabavoy plenty of time. 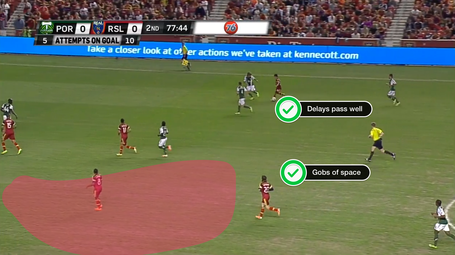 In our second shot, Sebastian Velasquez has held possession and slowed possession smartly. He's drawn two players to him, Will Johnson and Michael Harrington, and we see that Beltran's pass in the screenshot above has left nobody behind him. Ned Grabavoy still has lots of space, and Joao Plata's there confounding the opposition - but even he has more space ahead of him than you should rightly be shaking a stick at. 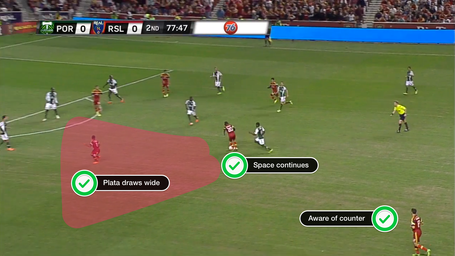 Joao Plata makes a run out wide, and this delays anyone closing down the play. Portland are woefully out of position (and we won't complain) with only Darlington Nagbe on his back. Sebastian Velasquez's run inside keeps him from being removed from the play, and this is important, too - if he'd drifted wide, it would leave a clear path for somebody to recover toward the middle - Will Johnson, maybe - but instead, he tucks inside, forcing Will Johnson to stay on him. 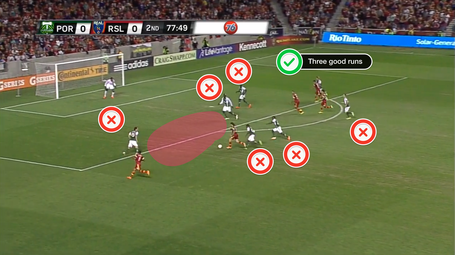 Here's where it really gets fun. Plata steps wide, with Jack Jewsbury following until he realizes that Grabavoy has a free run. Kah and Futty Danso both realize this, too, as does Nagbe (still trying to recover) and Chara, who is very poor on the play. Will Johnson has even given up his mark on Sebastian Velasquez and seems to be watching the danger Ned's creating. We're crashing in for a rebound on the right side, but we didn't need it this time. 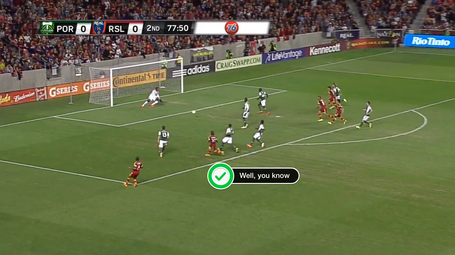 A shot and a goal, as Bill Riley says. Grabavoy's finish is perfect - Donovan Ricketts has moved to cover the near side after having occupied the far side, and it's this move that opens up the clear path for a shot. Fantastic.