High pressure is a feature of plenty of goals we've scored, and last weekend's goal from Joao Plata is no different. That one may have required more skill on the finish than some, but that doesn't obviate its awesomeness.

Let's take a look at that goal with some illustrations. 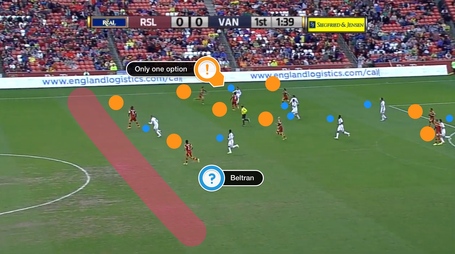 In our first shot, we see eight players not just in the opposition half but deep inside it when Vancouver are in possession. This is a risky move against a very quick counter-attacking side, but it's one that paid off. We've overloaded the left side of our pressure, and at this point, we have one-to-one parity with Vancouver.

Every player's movement is important here. Starting at the furthest back, Kyle Beckerman has blocked off a pass with some smart movement to pull away from his man. Tony Beltran has prevented the use of space inside with his narrow play — he's playing essentially as a fifth midfielder here. Chris Wingert is applying strong pressure, Javier Morales is cutting off the inside option, Ned Grabavoy is cutting out the backward pass, and Luke Mulholland has cut out the lateral move. 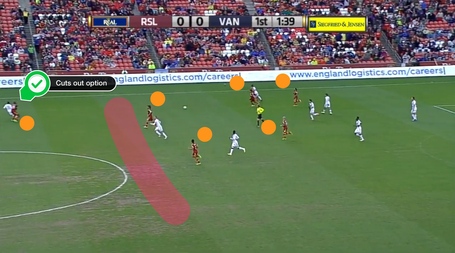 Only one option remains — try the long pass to Darren Mattocks. One of Chris Schuler's greatest qualities, his ability to spot a pass and step into the space in front of the receiving player, comes into play here. He wins possession and quickly lays it off. 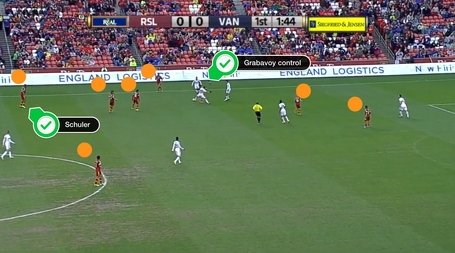 Another special attribute — Ned Grabavoy's tight control — comes into play next. Despite some harrying, he's able to draw three players out of position, and his simple pass to Chris Wingert at the back leaves options open.

Plata ends up relatively free near the top of the box — a dangerous spot to leave any player open, and the tiny striker is certainly no exception. The high pressure from RSL and subsequent giveaway from Vancouver have left players out of position. This is perhaps the greatest benefit to high pressure against a defense that doesn't remain static in these situations. 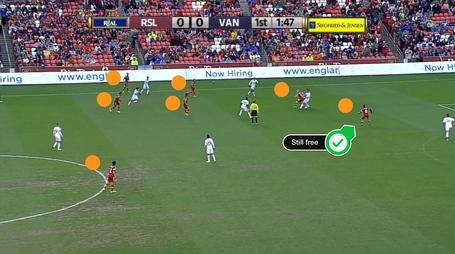 We see how that pays off when Luke Mulholland executes a deft touch to send Plata the ball — unexpectedly, because this took real skill. Again, a special attribute has played into our favor. 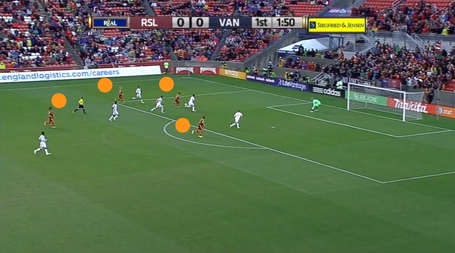 Plata's finish is perfect. There's no doubting that — it took, again, a special attribute to make this goal. Plata's finishing has improved tenfold over last season, and this goal wouldn't be possible without it. But make no mistake: This goal was a success from every player involved, and only or two — Nick Rimando and Nat Borchers — didn't play a role in the opposition half — a team goal if there ever was one.