We've been rolling in the goals with some frequency lately (read: on Saturday), and it's pretty clear that's down to a philosophical approach to the game that values risk and reward over constant safety.

Saturday's win over Chicago Fire - a win born out of strong attacking play until the last if there ever was one - exemplified that, and not only from an attitude, but from a distinct tactical approach, too.

Let's look at the final pass before each goal scored on Saturday. Each one shows something about our approach in the midfield and how that's paying dividends. 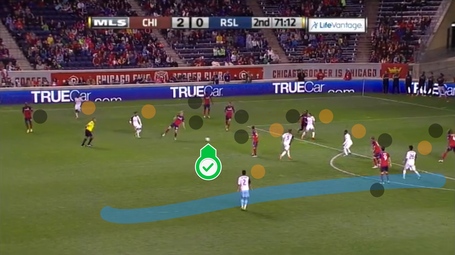 In this first shot, we see seven Real Salt Lake players not only in the opposition half, but in the left half of the attacking third. Overloading that quadrant forced confused marking and allowed us to interchange play in the buildup to the goal. It allows Joao Plata to escape his marking, yes, but we also see Kyle Beckerman making a free run around the back of his ball-watching mark, and Ned Grabavoy goal side of his. Tony Beltran is unmarked for a run at the top of the box should the ball break loose. While he's not marked, somebody surely had his eye on Beltran, distracting from the defending on the play. 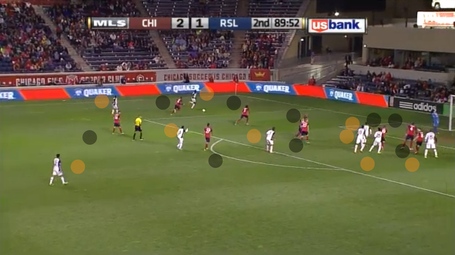 In this second shot, we see nine RSL players in that same framed quadrant. Beltran is again unmarked, but so are Beckerman, Olmes Garcia, and Javier Morales. Our commitment to this play sees us with equal numbers with Chicago, as we remained forward after a set piece. 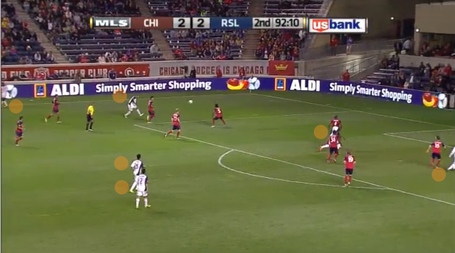 In this third shot, we see six RSL players in that same quadrant. Joao Plata is breaking free, Olmes Garcia is drawing two defenders with him, and three defenders are with Alvaro Saborio. Tony Beltran and Sebastian Velasquez are both unmarked near the top of the box.

Crossing has historically not been our biggest strength, and it still isn't - but two of these goals came from crosses into the area. The difference, I think, is that we haven't just taken the ball to the touchline and fired it into the area without purpose. Instead, we've overloaded the opposition defense, and with our constitutional ability to keep the ball in tight areas and our commitment to attacking movement at all periods of the game, we found space where we would normally find none.