It's been a while since we've really had a goal to breakdown, but Joao Plata saved us from the doldrums of discussing penalty kicks for an umpteenth time by scoring a smart, creative goal on Saturday in Real Salt Lake's 1-1 draw with Vancouver Whitecaps. 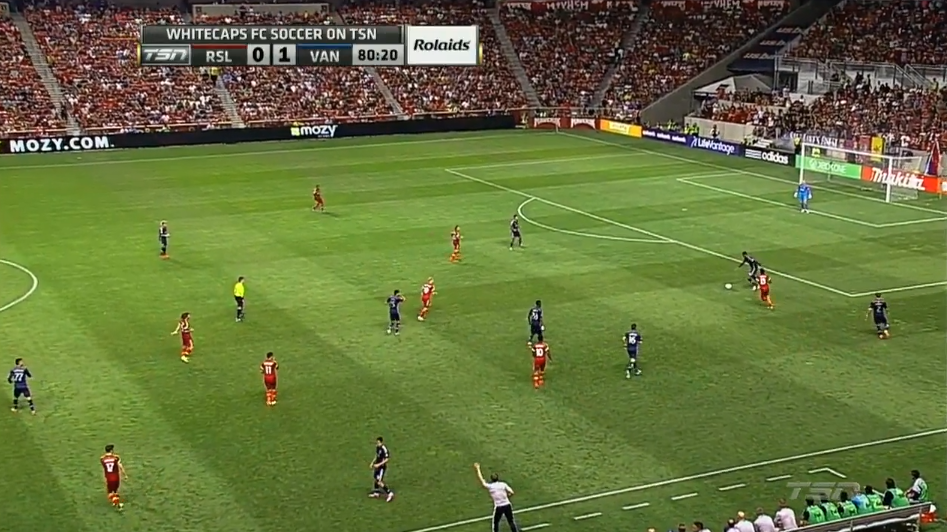 In this first screenshot, we see how open the midfield is, and how deep Javier Morales has come to influence play. Olmes Garcia is making a run to provide some high pressure, which is vital - it forces the defender into a quick decision instead of a deliberative one. 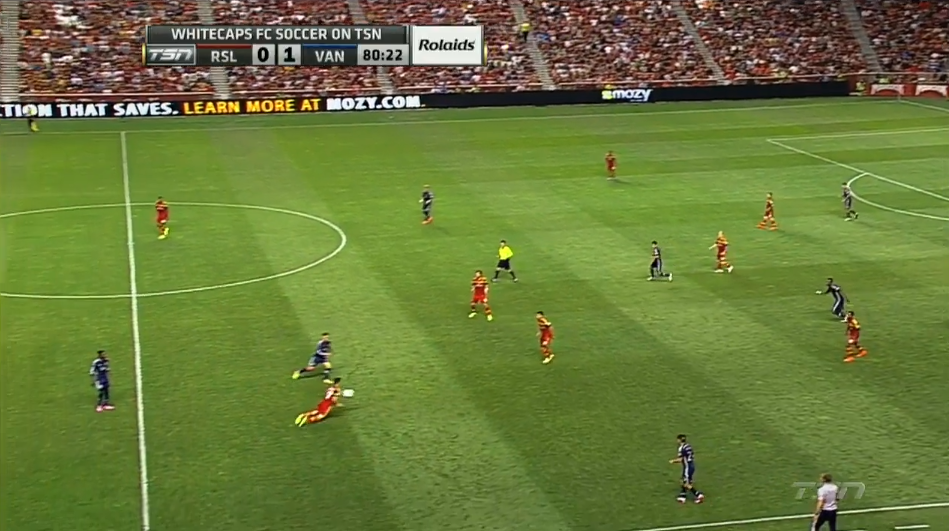 In this second shot, Chris Wingert brings down the ball from the clearance above in spectacular fashion, and Morales is right there to pick up the ball. We see four players looking toward Morales; three of those willl mark him, opening space for other players, as we'll see in the next shot. We also see just how free Joao Plata is, and that's important to note, too. Here, Ned Grabavoy is actually playing essentially level with Olmes Garcia. 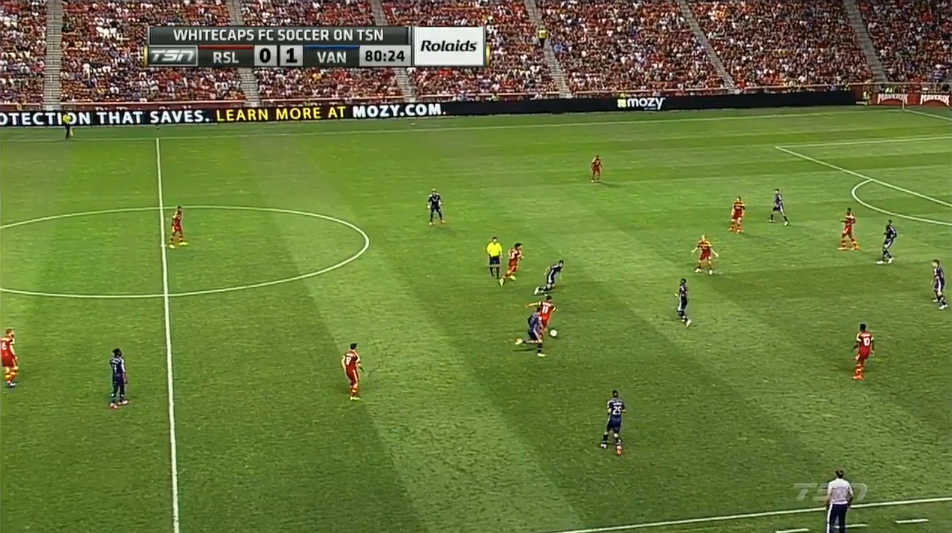 Here's where Vancouver just falls apart. There's a little bit of nominal back-pressure on Morales, but nothing to make him nervous on the ball. Luke Mulholland has stayed forward to receive a well-placed ball from the playmaker, and Kyle Beckerman is making an unwatched run down the right side. If Mulholland receives the ball, he won't have a lot of time to deliberate on it. 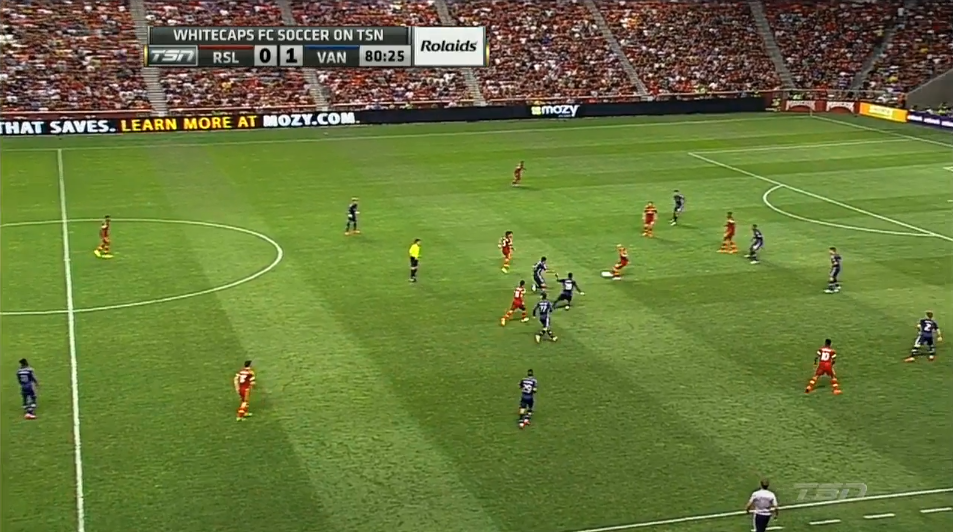 He didn't need to take time to deliberate, because he's ready the pass of Beckerman very well. A simple, backward pass it may be, but it essentially takes the two midfielders closing in on him out of the play for long enough to influence play. We also see here that Joao Plata is still dangerously free, with nobody on the Vancouver back line reading his movement. The right back is focused on Ned Grabavoy, whose positioning has helped to narrow the defensive line. 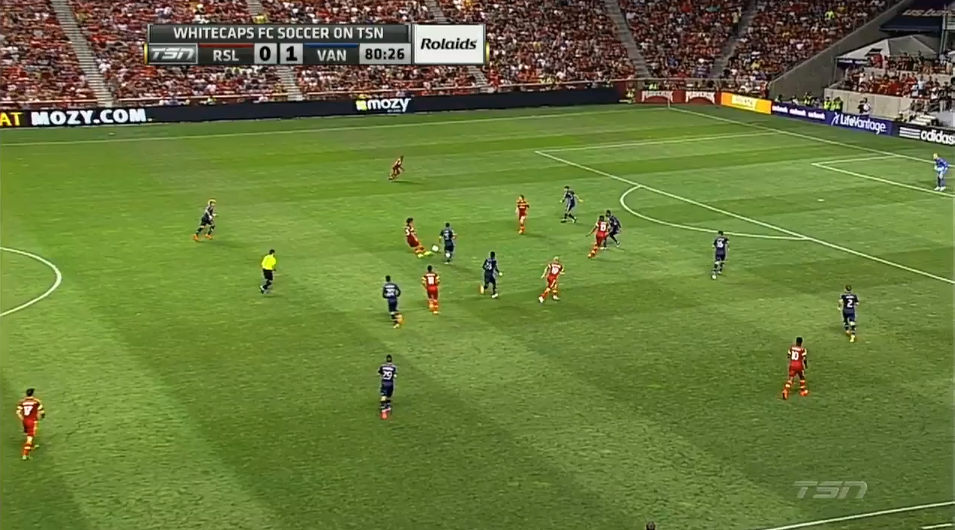 Here, Kyle Beckerman plays a nice, simple pass. It's made possible by his run to receive the ball from Mulholland and the width of Plata, who can be confident that he has enough space to move forward with the ball when he receives it. 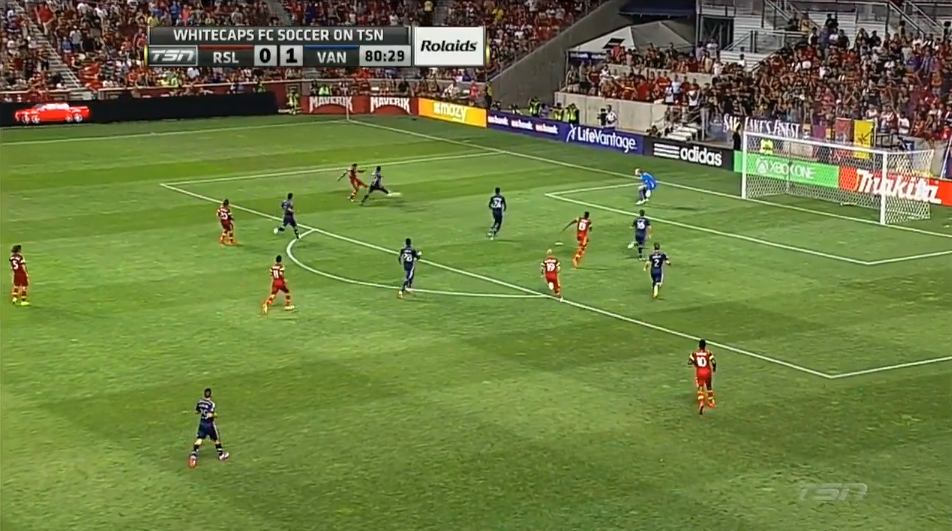 Plata picks up the ball, makes the run, and fires home with a great finish. No defender is really able to shade the shot, so the goalkeeper makes an educated decision about his positioning - but it necessarily leaves a section of the goal open. It's one that takes a great deal of skill for a striker to hit, but Joao Plata has that and more, as we've seen so often this season.