Luke Mulholland's goal on Thursday against Montreal Impact was not the fastest scored by Real Salt Lake this year - in fact, it's the third-fastest - but it was the fastest by the ever-growing midfield threat.

At three minutes in, Luke Mulholland capitalized from a set piece, an area in which the team has struggled in the past few years. It's hard to be disappointed about this fact. 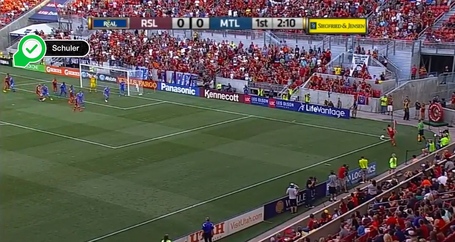 In this first shot, you'll see Chris Schuler marked by a defender. This is to be expected, and from this point in the corner, it actually looks like everything's working OK for Montreal. Notably, there is a player not marking anybody near the top of the box; presumably, this is so he can attack the ball, or prevent a clean run into the box. 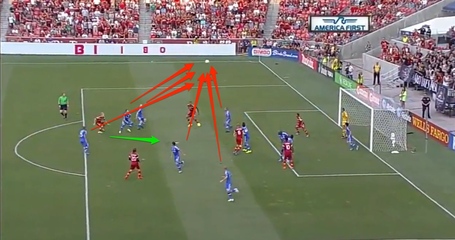 In this second shot, you see Schuler has actually started to pull away from his defender, forcing another opposing player to leap in to correct the error. Six Montreal players are pretty much now watching the ball, waiting to see where it drops, and you can already see the marking going haywire. 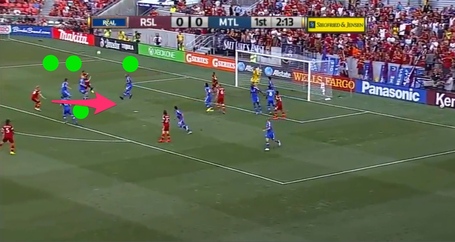 Luke Mulholland has started his movement in the above frame; here, he continues it expertly. Four Impact players are marking two RSL players, with one more leaving Ned Grabavoy as he gets sucked into the ball. How exactly Mulholland beats two markers here is difficult to say, but his positioning is smart here. 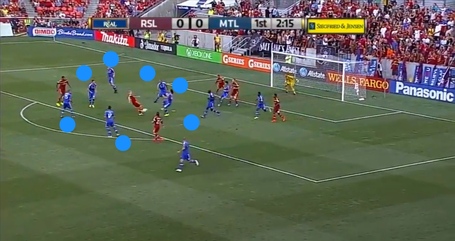 Here we see Luke Mulholland with seven players in some proximity, but none of them are close enough to prevent a shot, nor are any of them in front of his shot regardless. His shot skips up off the surface, leaving Impact goalkeeper Evan Bush with nothing left to do but pick the ball (and cliche statements) out of the net. 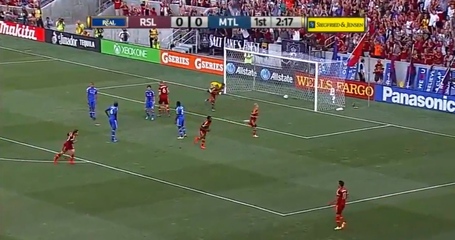 Finally, celebration. It's a simple goal, but it's one that we scored because of smart movement from two major pieces here. Schuler's drop off the far post gives him room to win a header, and Mulholland's run inside unmarked opens the shooting opportunity.