Share All sharing options for: Goal Breakdown: Joao Plata scores with his head to open game against D.C. United

Joao Plata scored perhaps the first headed goal of his career (maybe — I haven't checked, but we can be dead certain he didn't score one in such a spectacular way in any other Real Salt Lake game) last weekend, and as we ease out of the celebrations around beating D.C. United, it seemed as good a time as any to break down that goal. 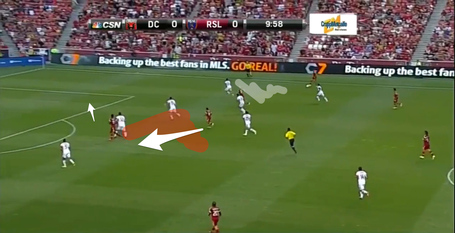 You'll note that this is in the buildup to the play that led to the goal, not that play itself. That's purposeful: The disruption of marking started here. Joao Plata has dropped into a position between the DC United midfield and defense, while Olmes Garcia is hanging off the shoulder of the right-most central defender. This leaves the left-most central defender marking nobody, which seems fine at first glance, but it's where the space came from. As a result, there are three players close to Luke Mulholland, but nobody close enough to do anything substantial if any other player receives the ball. 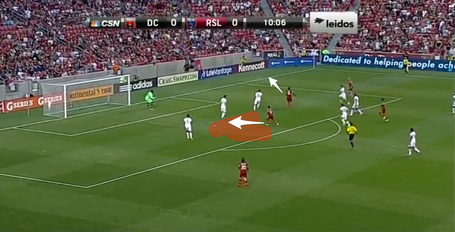 Olmes Garcia has pulled his run away to receive the ball, but he's not in a great position to do anything with it. He takes it to the end line and attempts to swing a cross in, but that's not strictly a success. You'll note here that the left center back has moved to pick up Garcia, while the right center back is now marking Plata, who is moving into the box. Olmes Garcia takes a hammer to the ball to cross it in, but it bounces and rebounds to Luke Mulholland instead. 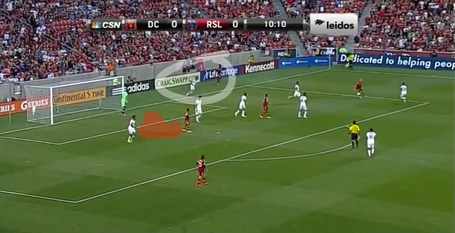 The left center back removes himself from play to follow Olmes Garcia to the end line, which is fine - that's what you'd expect to do, because it's less dangerous than allowing a dangerous striker an unprotected run or cross into the box. Olmes Garcia's shot has given Mulholland space, and the defenders who were focused on Garcia have instead turned to mark Javier Morales. A sane decision, but perhaps not the best one considering what the right back here is doing. He's too far away from Plata to defend properly, and he's much too far away from Ned Grabavoy to even have a shot at defending him. 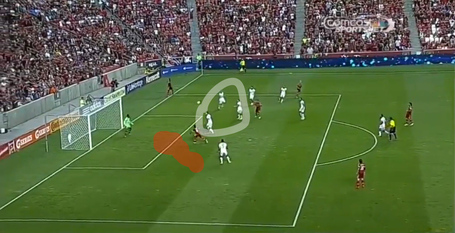 We see Plata's run has paid off, and Luke Mulholland sends in a beautiful looping cross to Plata. A run past the flat-footed center back leaves all the time in the world for Plata to head the ball into the goal, and that's exactly what he does. There are four defenders in a relatively straight line, which is fine for, say, a corner - they'd each have a chance at attacking an outswinging ball, maybe. But Mulholland has smartly played the cross in to Plata, who is basically unmarked.

Watch it all come together - it's the slightest movements that make the difference, but without the skills Plata and Mulholland have, it would have turned out very differently.