Goal breakdown: The unstoppable motion of Javier Morales against Seattle

Real Salt Lake may have lost 2-3 to Seattle on Friday, but at least we got a classic Javier Morales goal out of it. Let's go over how that goal came about.

Share All sharing options for: Goal breakdown: The unstoppable motion of Javier Morales against Seattle 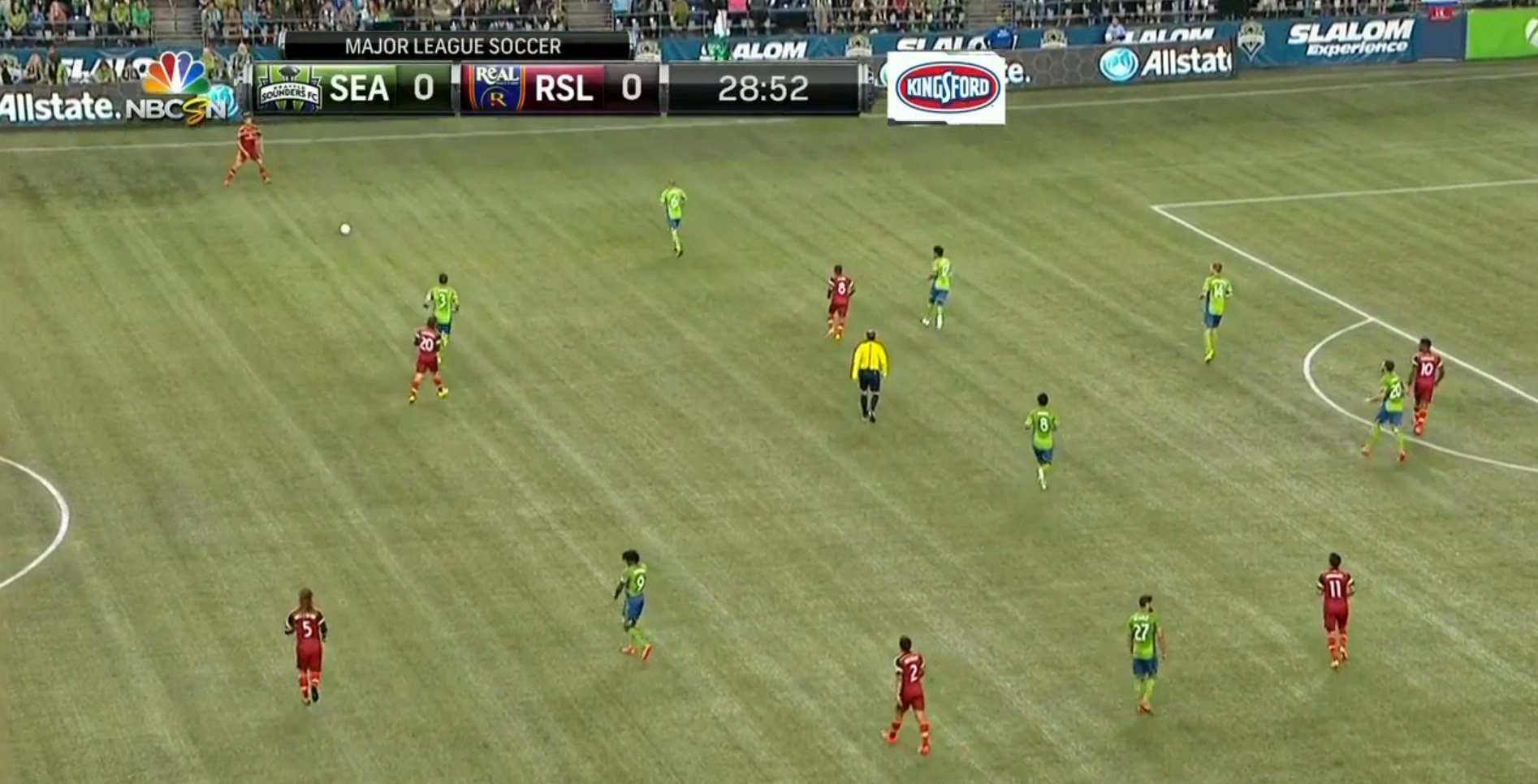 Our possession here is good, and Seattle thinks they've done themselves a favor by not pressing too hard - thus not opening too many spaces for other players to run into. We're content with this, as it puts us in the driver's seat and lets us probe for space. You'll notice that Seattle is very organized; even Obafemi Martins has come back to defend. However, you'll also notice that somehow, nobody's paying particularly close attention to Javier Morales. Interesting. 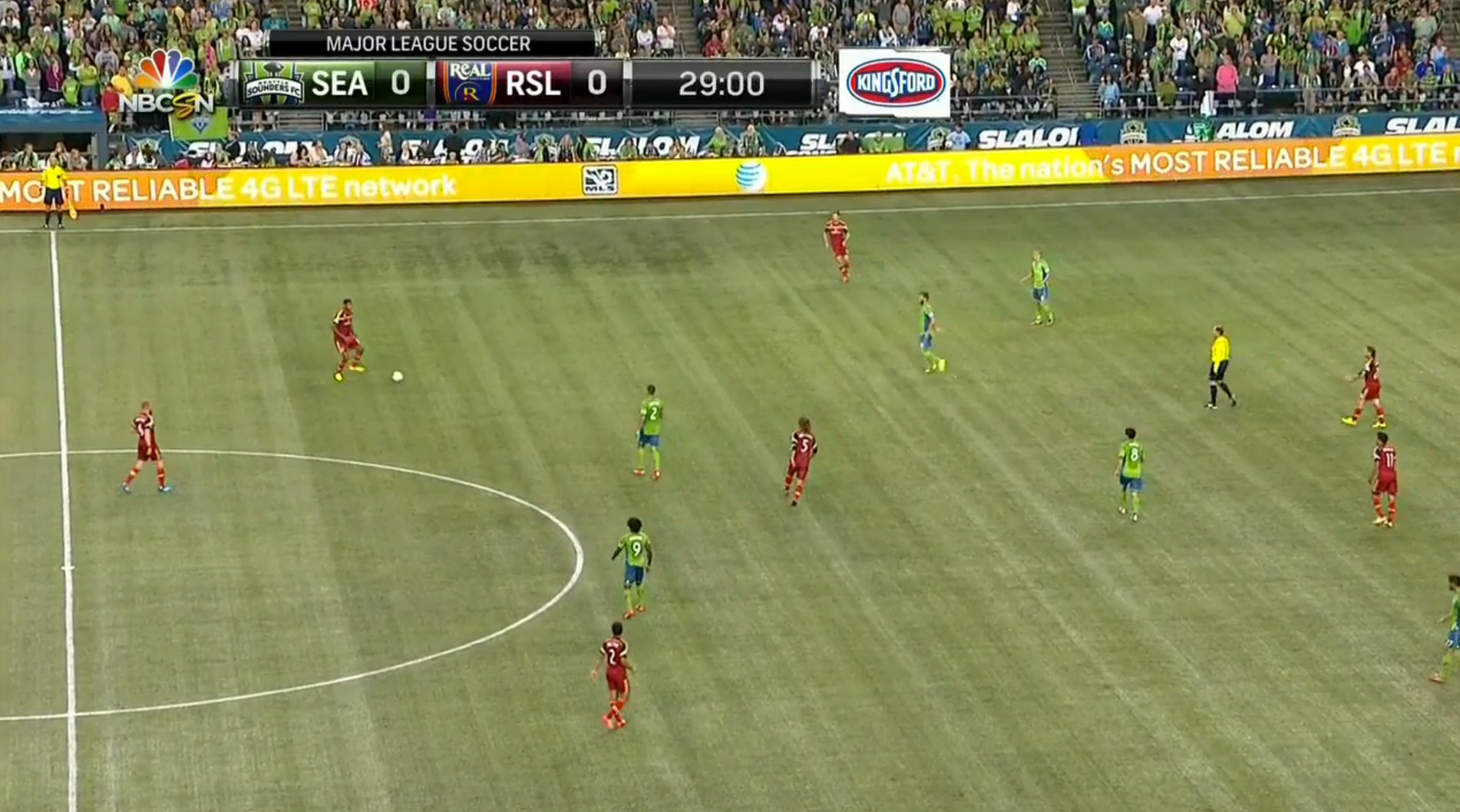 The ball comes back to Chris Schuler ahead of the halfway line, and he's not really being marked in any significant way. In fact, it would seem that everybody's just content to let him hold the ball, as they're confident that any passing options have been marked away. We'll soon see two things: 1) They were wrong, and 2) Chris Schuler has good vision. 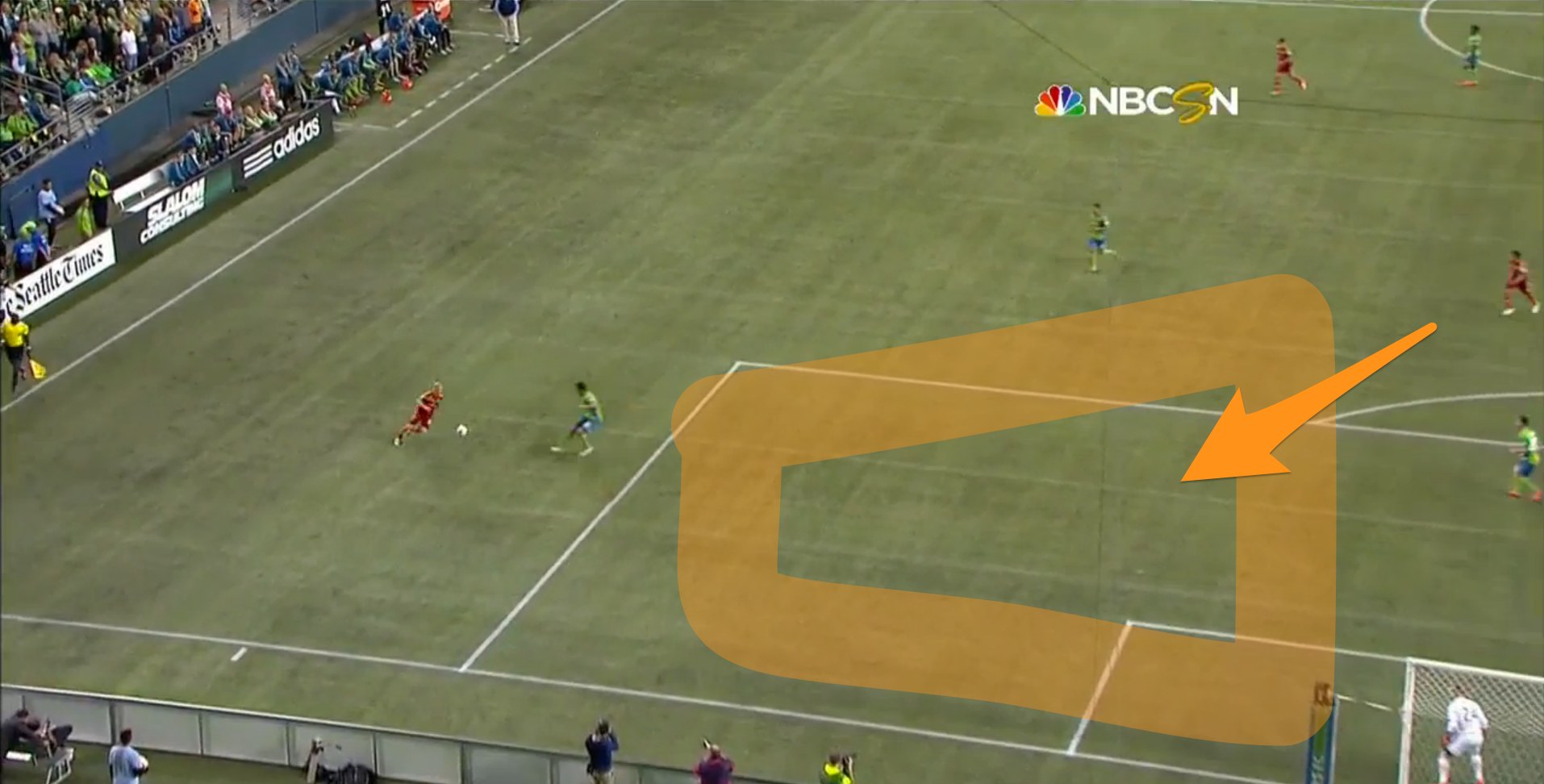 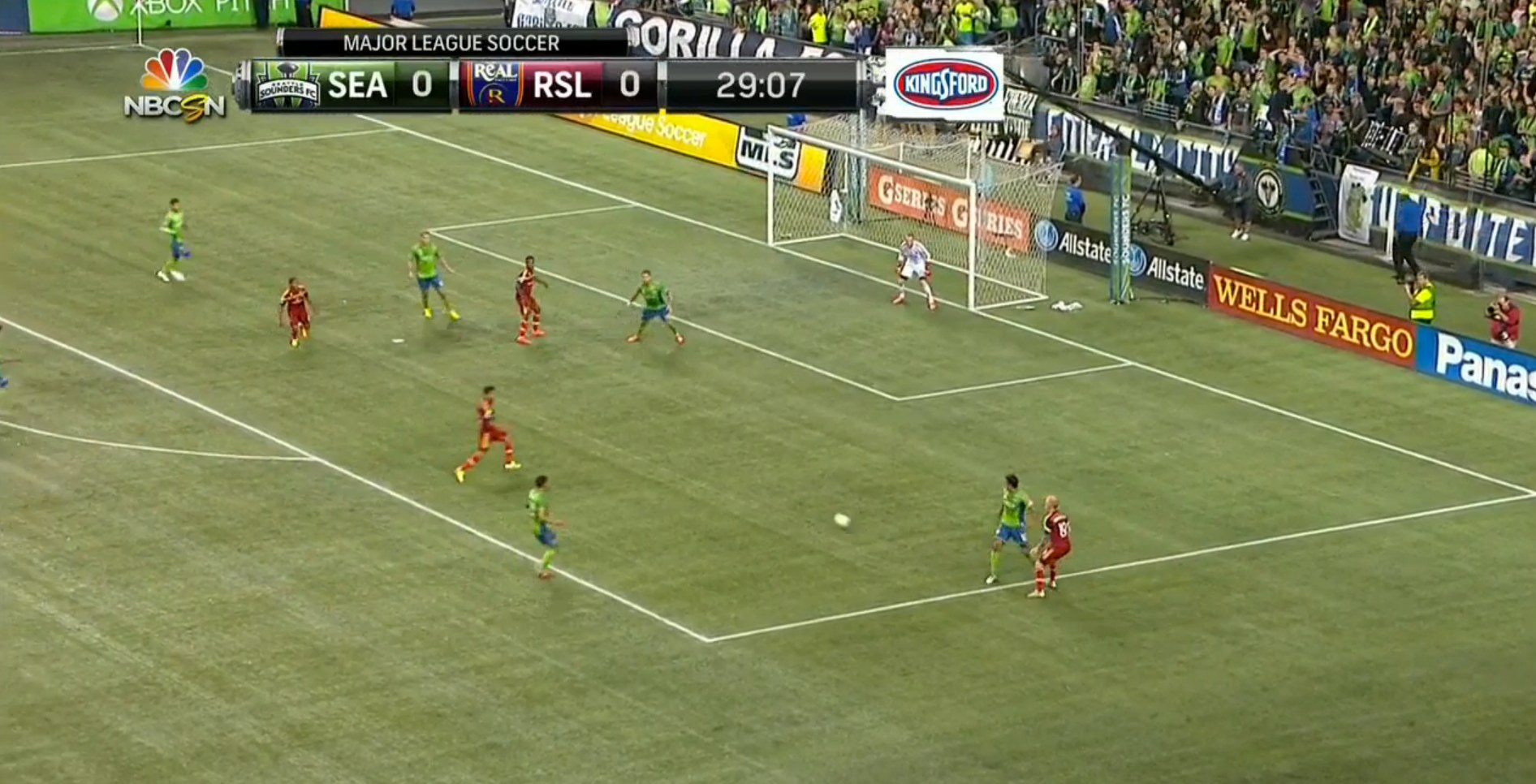 Luke Mulholland takes a great first touch and delays just long enough to beat Leo Gonzalez on Seattle's left side. He takes a step away from touch, which somehow fools the defender, perhaps because he expected Mulholland to run at him. But he's not facing a traditional winger, who would almost certainly would be running toward touchline to try to be beat the defender. Mulholland's central midfielder qualities are shining here, and it's taking the touch away from goal and gearing up for a simple pass inside. Javier Morales is somehow given a free run into the middle - this is the value of having a player who can float between the midfielders and the forwards, and he's pushed and pulled his way into an unmarked position. It's shocking, really. 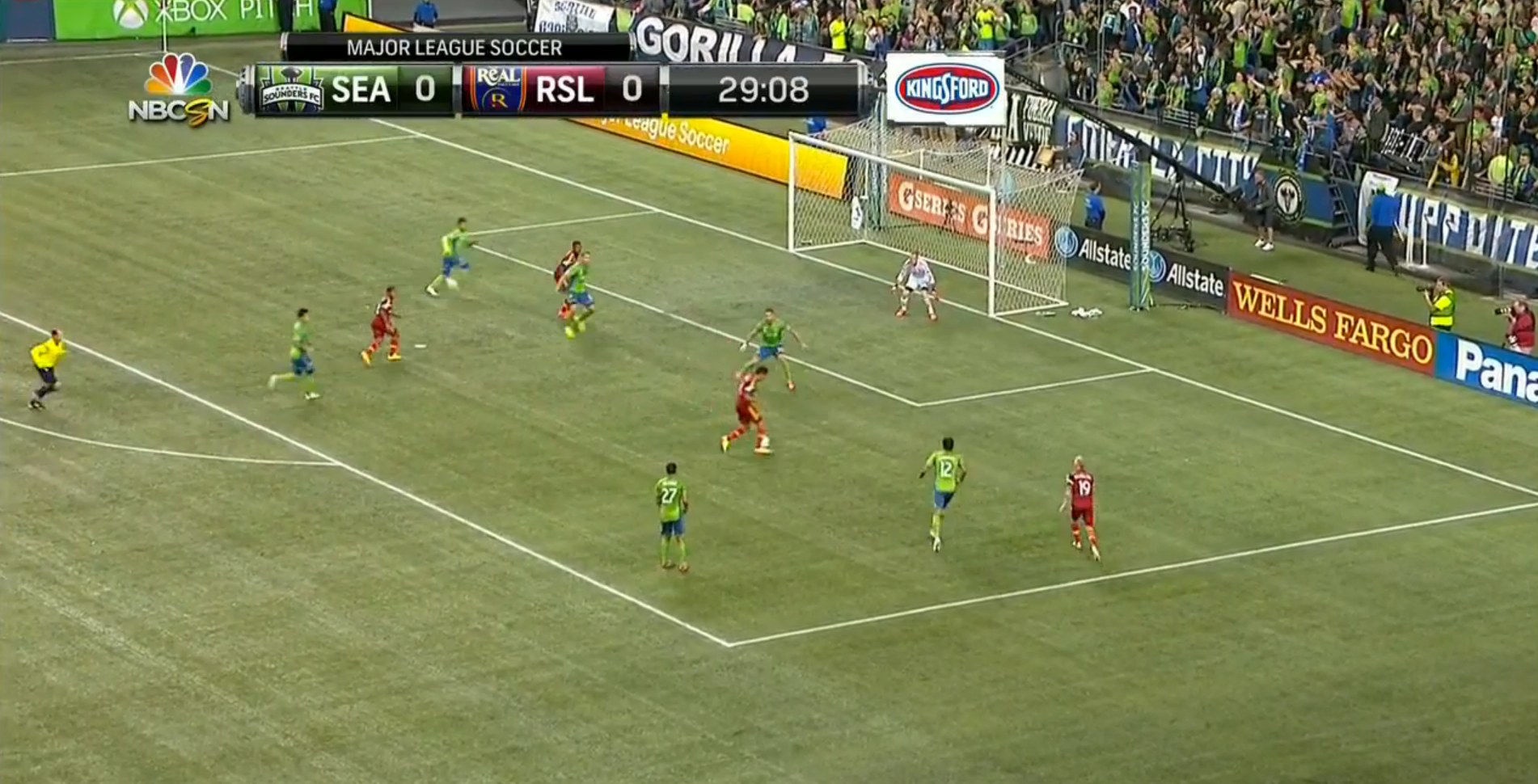 This is criminal defending, really. Javier Morales somehow has nobody putting any pressure on him, and it appears there's a statue of Lamar Neagle near the top of the box. Zach Scott is doing all he can to not fall over underneath his own weight. Leo Gonzalez is busy being beat by Luke Mulholland. Javier Morales sees all this (it's like The Matrix to him, I'm sure. The thing in the movie, that is. Not the movie itself. There is no Keanu Reeves here, unless maybe it's Neagle's ineptitude.) and simply plays the ball between the legs of the defender, beating the goalkeeper in the process. Simple.

The best part is that this goal came from a bout of unchallenged possession. There's an overwhelming trend sometimes to fault 'meaningless possession,' but until Schuler launched the ball over to Luke Mulholland, that's probably what it would have been called. It looks like possession-for-possessions' sake, but it's so much more than that.