Now we have seen the 2017 MLS Expansion Draft (un)protected lists. What do you think? We get an opportunity to chat about the lists provided by RSL, but let's have a little fun since expansion only happens once every other year nowadays.

I'll start off: This is a preliminary list after only a short look over the list, but I think there are some high quality players on the wrong side of the invisible shield.

Here we go:
Harry Shipp (SEA) - I legitimately believe Harry Shipp has the quality to start in MLS. Roldan has performed well and has dominated Schmetzer's lineup, especially with Ozzie Alonso out. Shipp usually plays higher up, and with them re-signing Dempsey to another year, Shipp will likely continue as the understudy and will only manage to get a few games as a wide player. Alonso, also left unprotected (likely because of a long-term injury sustained this season), would be a tough loss as well to Seattle. I choose Shipp here because he is a solid backup to any no. 10 DP in MLS and has the quality to start and make a difference in multiple spots on the field (CM, CAM, LW, LM).

Saad Abdul-Salaam (SKC) - A 26-year-old RB that is 6'4" and had a league-high 6 assists last season. Perhaps he's not the best RB available with only three seasons under his belt, but he has a ceiling that could provide either a starting job, or someone who can push a starter. Who wouldn't want a 6'4" player on the field? We've cherished Horst for set-pieces. My backup, and likely my first choice would be Tony Beltran, but I'm not sure whether or not LAFC would take that risk, even if he is solid when back from injury.

Miguel Ibarra (MNFC) - Miguel had a decent first season in MN (3G, 4A) as a speedy playmaking winger, and is a part of a very talented, but non-DP caliber offensive front. I was surprised to see his name, so perhaps MN knows something we don't - like an inevitable trade in the works, with all the MLS rumors. He provides quality depth, speed, and decently hard defensive work, which will inevitably be missing from LAFC's forward corp with the one-sided Vela.

Lloyd Sam (DC) - having been shopped around a bit by NYRB, Sam looks to have made an impact at DC, even fighting with his former team and picking up a fine after having picked up a straight red earlier in the same September month. He is feisty and hard-working and has a proven track record in this league.

Laba (VAN) - I think Laba is one of the most promising true defensive midfielders that MLS has. He plays a lot like Ozzie Alonso and has a higher ceiling, in my opinion. His ACL injury ended his season early, but there is not reason to think he won't come back just as strong in 2018. He comes with a very hefty price tag at $725K and an INT'L spot. But Bob plays a stalwart DMid consistently in his formations and he wouldn't be worried about losing a guy like Laba for a long-time, at only 25-years-old and very deep pockets (not to mention the ability to buy him down with Garber Bucks).

Honorable mentions: Raitala, who was one of the best LBs in the league at a tiny salary of $125K, but has an INT'L tag. Perhaps I'd take him over Laba if the price were an issue. Tony Beltran, David Ousted (I believe he'll be an easy pick up given VAN's desires to let him leave), Ozzie Alonso.

One major consideration here must be INT'L spots. LAFC have not hidden then cards close to their chest, as possibly an early showing of how they actually do business. Four of their six rostered players are internationals (list incomplete with Zimmerman trade today) They did, however, pick up an INT'L spot from ATL in a trade today. So they have some flexibility with their roster building, hence why I added Laba to the list.

So what do you think? Who would you select, if you were LAFC? 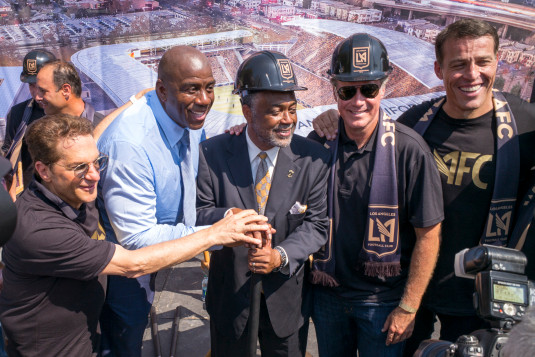