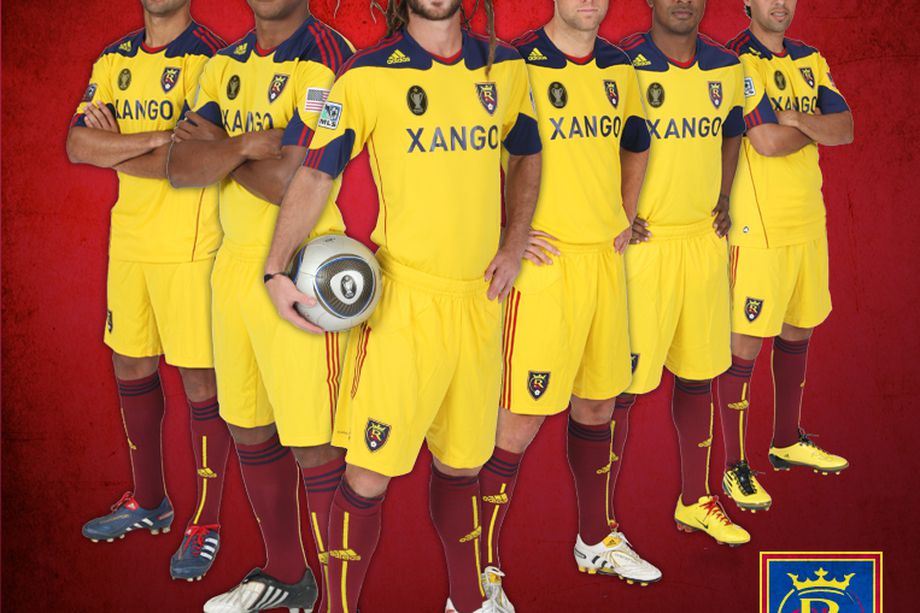 Firstly, yes, our third color is officially called Real Gold. This is what was announced when the team first showed the world our crest and colorway back in 2004. Yes, its weird. Yes, victory gold sounds better, and yes, I will continue to call it Real Gold just because it is odd. I assume this is Treys doing because it sounded better in the press release.

Anyways, here is why we should have a Real Gold kit next season.

Red and blue are played out. Let’s be real (get it?!? HA!) just because we call it Claret doesn’t change the fact that we have 6 red teams in the league. 7 if you include Colorado'’s ugly burgundy, but I’ll say its poopy brown enough to not be included in the red category. 6 in 26 teams use a bright Red as a primary team color, that’s a quarter of the league. It’s the most used color behind ….wait for it…. Blue. 10 teams use blue as a primary color. That means our two main colors are used as a primary by 17 teams in the league.

Real Gold can help us build a kit identity. The overlap in use of colors obviously leads to similar looking uniforms. How does one team make themselves stand apart from other teams with similar colors? Well many teams have developed an identity with their kits. LAG has the sash, SKC has argyle diamonds, ATL has 5 stripes and Red Bulls have no star. These features make the uniform easily recognizable to that team and have been carried on from one kit to the next. Ours should/could be the cobalt sleeves but for some reason we turned away from that. That’s a different argument for a different day. But because we currently lack that singular identifier that screams "this is an RSL kit", we have freedom to move forward as we see fit. Here is where a Real Gold kit can help build some of that identity.


It would be a unique combo in MLS. Of the 6 teams that use red as the 1st kit, all 6 have a white 2nd kit. In fact, of all 26 teams, only 5 don’t have a white kit as 1st or 2nd. These teams are Columbus, Houston, NYCFC, Kansas City and Seattle. This list of teams is actually important and here is why. These aren’t all big name teams. They aren’t all highly successful teams either. This means that any argument that the league wouldn’t let us is pretty thin in my opinion. Joining the non-white kit team list would separate ourselves from the other teams that use a red primary and much of the league.

We can wear Real Gold more than our white kits. There is only two teams who wear yellow, Columbus and Nashville. Yes, Nashville is in the western conference, but who knows if they will not stay in the west as the conferences shift with Austin and Sacramento joining in the coming years. So worst case scenario, we can’t wear our Real Gold twice a season. Every other game it would be totally fine.

Two teams currently use white as a primary (LAG and VAN), two other teams have light enough primary kits that we normally wear our Claret kit when playing them away (SKC and NYCFC). This means that by switching to a Real Gold kit, we would actually get to wear it in more games than our white kit because the conflict would be less. Not that this matters if you are certain teams playing in a rivalry game, looking at you PDX vs SEA green on green on green field.

Next season it the perfect season for it! With the addition of the Cobalt shorts to the Claret kit in 2020, RSL is reigniting its passion for the Cobalt and highlighting it on a Real Gold kit would just be another way to celebrate it. Throw on a single cobalt sleeve and bam we got a spicy new old school look without having to get all new age with weird printed on designs.

AJ on twitter made this mock up over a year ago, look at the full tweet. Its a thing of beauty.

Nostalgia is what we do. It's easy to see that nostalgia is a huge part of the RSL fan world. We see the praise former players get when they come back to play for us. We see the support former players get when they come back to play against us. For better or worse nostalgia is huge in our fan base and bringing back the gold kits would fit right into that. Sure we didn't win a lot in them, but that was then and that was when they were a 3rd kit. They deserve a second chance so let's give it to them as our 2nd kit.

Bonus point, I’m too much of a slob to wear white. I spill too much, I drool too much, I eat too much, I get dirty to easy. Me and white clothes have never gotten along, and I hear numbers of fans say similar things. Give us a chance at something other than the claret kits.

I don’t think we should hold our breath. It did take a decade to get the Cobalt shorts and the #9 back so I would say there is no way we will see a Real Gold kit next season. But hey, I’d love to be wrong.