The goals that matter most: Garbage Goals and Golazos

A look into the importance of a goal and whether or not how it is scored is more important than the goal itself.

Share All sharing options for: The goals that matter most: Garbage Goals and Golazos

There is a moment. A moment full of anticipation, angst, and ultimately jubilation. It's a moment in which 20,000 people hold their breath, grab the person next to them, jump up and down, and scream. There is nothing quite like this moment. That half second where all eyes are on one player with a ball at his feet, swinging his foot with as much force as he can to put enough on the ball to make the net bulge, contains so many emotions it can be overwhelming.

Scoring goals or not scoring goals is likely the most hotly debated topic in soccer, as it many other sports (home runs, touchdowns, etc.), because of the dramatic importance and emotion that it carries. Is a player on form and scoring goals? What is he doing or not doing that could be influencing whether or not he is scoring goals? Was he out of position? Should he have gone near post rather than far post? I could go on and on and on, and many people do.

It has gotten to the point with some groups of fans that it matters less that a player is scoring goals, than how those goals are scored. In today's increasingly interconnected world, we can all see the goals being scored around the world, and we judge everything by whether or not said players goals or goal scoring form is as good or better than many of those players.

There are terms floating around used to discredit a player that is on form and scoring goals, but not the goals that we as fans desire to see. My favorite of the bunch is "garbage goals". Such and such player may have scored 19 goals this season, but all he scores are "garbage goals". The implication there is that he scores goals that are easy, or that are right in front of goal, he's "picking up the garbage". Interestingly enough, many people around the world also call those goals "striker goals", or clinical finishing.

It's interesting to me, that when you look at the world football community and the game in general, there tend to be two types of strikers or goal scorers, or at least that's what many people seem to think. Those that can dribble and shoot and those that can score from close range.

You see players who can beat a defender or two from 18-25 yards out, square up on the ball, and drive a shot on a rope or finesse it into the net. These players are valuable and add a dynamic to a team that pulls the defensive line a little higher, maybe spreads them out a little, and can allow teams to slice through a defense.

Yet others are the type who have a way of always being in the perfect position, in the center of the goal mouth or near either of the posts, ready and waiting for a pass, chip, or cross to bury. These types of players draw the attention of defenders and tend to earn the attention of more than one. Defenses will key on this player giving other players on the team much more space to create in their attacking third.

I would put forth that there are more than these, but for the sake of this rant, I will keep them to that.

In the case of the "shooter" vs the "striker" it seems that the only difference is how the ball actually ends up in the back of the net, and really, it seems a matter of personal opinion that drives whether or not you like a particular type of goal. Is it awe inspiring to see someone like Cristiano Ronaldo lace a shot from 30 yards out, absolutely on a rope to the upper 90, beating an outstretched keeper? Of course it is. Do you sit on the edge of your seat when a player like Messi dribbles 4 or 5 players, making them all look like a 4 year old trying to walk on ice, and slots a ball home? You would have to be insane to say it's not.

What about the Robin Van Persie, Zlatan Ibrahimovic, and others like them, are their goals any less exciting? Ibrahimovic posting up in the box, as the ball comes across the box, elevating with an overhead kick to crush the ball into the back of the net. Or a player like Van Persie, flying across the six yard box to meet an oncoming cross and deftly head it into the far corner of the net. You cannot argue that these goals are exciting as well.

With each and every one of these, and every other goal, there exists that slight moment before it. Heart stopping, muscles tightening, mouth opening, and the scream of joy preparing to exit your body with all the emotion and fury you can garner. Does it matter how the goal occurs? Does it matter where the player was standing, how close or far from the goal, whether or not he dribbled through 5 players? No, the end is what matters. A goal. Hopefully at least one more than the opposition scores.

So why the discussion? Why do we as fans choose to nitpick, vilify, demand trades, or go on public tirades based on how a player scores goals? It's one thing I truly cannot wrap my head around. To be honest, I've done it, but specifically about players on teams other than the teams I support. Mostly it's out of jealousy, directed at a player that scores massive amounts of goals for a team I don't care for, wishing that they were goals scored for my team. But never a player on my team, not if he is scoring goals.

One excellent recent example of this is criticism pointed at Real Salt Lake's Alvaro Saborio. Currently the #4 player in the Castrol Index, a measure used by the league to determine a player's impact on their teams ability to score or concede a goal, Saborio is among the most impactful players in Major League Soccer. The target forward plays an integral role in the success of the team, having scored 19 goals in all competitions (17 in league play this season). 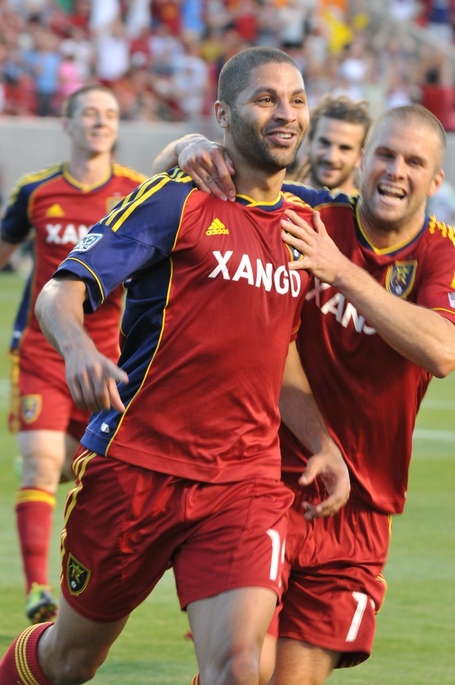 We've seen this happen on several occasions with Alvaro Saborio and his striking partner Fabian Espindola. Most recently it was Fabian Espindola benefiting from the play of Alvaro Saborio, indirectly, scoring two goals against the LA Galaxy this past weekend. Fabian had one of the best games he has had since the spring, no one can or wants to take that away from him. But his second goal illustrates my point. as the ball came into the box most of the defenders were drawn to the target striker, Saborio, rather than marking the more mobile Fabian Espindola. That is how a team works. There have been many occasions as well where the work rate of Espindola has created goals for Saborio.

Both of these players are currently scoring goals Saborio with 3 v Chivas two weeks ago and Espindola with 2 this past weekend vs LA. Each goal was very different from the next, but they all looked exactly the same on the stat sheet after the game. More than that, the 6 points picked up from those two wins count just like any other 6 points.

So, what's the point of all the debate? And why vilify a player for scoring goals? I honestly don't know, but I really don't care to. More important to me is that goals are being scored at a critical time in the season. The hope being that the number of goals scored for my team are greater than the number of goals scored by the other team at the end of the 90 minutes. If Alvaro Saborio, Fabian Espindola and the rest of RSL can continue to create enough of those little moments of angst and jubilation for all of us fans, one can only hope we will all see Real Salt Lake earn the silverware we all desire.