John Stertzer, rookie midfielder, joined Real Salt Lake through the MLS SuperDraft at the beginning of the year. Since then, he's seen a handful of senior minutes and been a standout player with the reserves.

Stertzer, a University of Maryland graduate, came to Real Salt Lake acclaimed as the most "pro-ready" player in the 2013 MLS draft class. But being pro-ready and being RSL-ready are two different concerns, and learning the system takes a high priority.

"I think I'm making improvements and positive steps every day," Stertzer told reporters after Monday's match. "It's a new system for me, and I have great players around me to teach me the way. I just have to stay positive and keep working hard, and at the end of the day, it'll put me in the right place."

"Hard work every day will always put you in the right place."

After impressing during preseason, Stertzer made the bench for Real Salt Lake's opener against San Jose, and he made his first appearance — a nine-minute cameo against D.C. United in his hometown — only a week later.

Stertzer, 22, seems to have his head in the right place. It's perhaps no real surprise that his coach, variously regarded as unwilling to expose rookies to the rough and tumble of match day action, has put him into action.

"It's given me the opportunity to step in and make some positive strides on the field," Stertzer said. "At the end of the day, playing time right now, obviously everyone wants to get on the first team to play, but my main goal is just to work hard in training and these games, and I think at the end of the day, that'll put me where I need to be. I'm here to help out the team in any way I can." 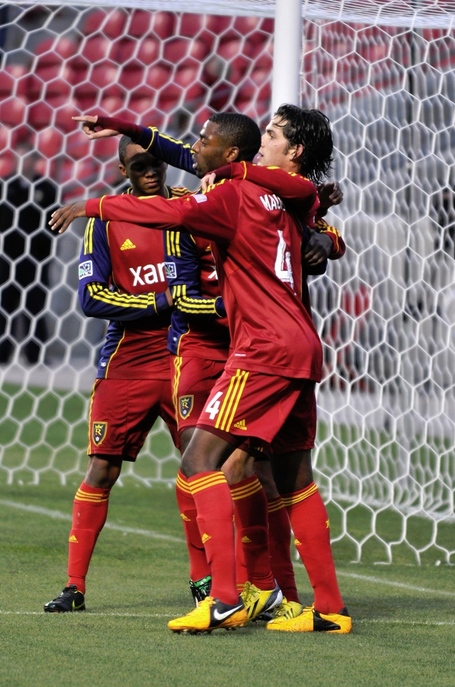 There's an obvious learning curve for midfielders at Real Salt Lake in the diamond midfield. It's not the wide diamond some of them might be familiar with from watching Jose Mourinho manage across Europe — Kreis's preferred deployment finds its roots in more Argentinian tactical setups.

There's benefit for midfielders in that sort of setup and approach, Stertzer said.

"It's a very unique style of play we play here," he said. "As a midfielder that loves to keep the ball and likes to play, it's a great place to be. Adjusting to different defensive tactics and where to be offensively is all new, but we work on it every day. Hard work every day will always put you in the right place."

Stertzer will almost certainly see more time with the reserves than the first team in 2013, which is no surprise. For all his ability and, importantly, strength, Stertzer remains behind players like Ned Grabavoy, Luis Gil, Sebastian Velasquez and perhaps Khari Stephenson in consideration for play at the outside spots.

For goalkeeper coach and head of the reserves Jeff Cassar, working with players like Stertzer in the reserves is about getting them ready for senior minutes.

"We have a little bit more depth this year, obviously, so that always helps out our reserve team," Cassar said after Monday's match pitting RSL's reserves against BYU. "We just want to push these guys and push them along as fast as we can. The faster we can push them along in the reserves, the more they can help us out in the first team, so we're just putting a lot of energy into these young players so they can contribute to their first team."