Share All sharing options for: Beckerman excels as shield for defense in 2-0 US win over Mexico

By all objective measures, Kyle Beckerman had a fine night for the United States last night in a 2-0 win over Mexico.

He was involved in play from start to finish, he was calm, and importantly, he shielded the back line from dangerous moments time and time again. It was the level of performance we've come to expect from Beckerman, what with seeing him week-in, week-out, but the nature of his play was markedly different from what we're used to.

At Real Salt Lake, we've grown used to a defensive midfielder whose job is less to shield the defense and more to build play from the back. As such, we expect to see Beckerman in positions higher up the pitch and to move into positions to receive the ball.

But that's not his role with the national team under Klinsmann. Instead, he's there to pick up passes from the defense and push them either to wide positions or further up the pitch, depending on the level of pressure being applied by the opposition. 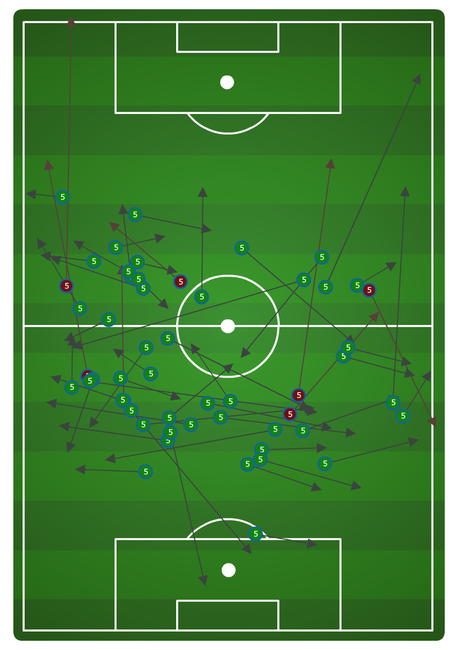 For their part, Mexico presented relatively high pressure on the U.S. defense without the ball. This, combined with a USA midfield lacking a between-the-lines attacking option — Dempsey was perhaps supposed to play that role, but his positioning was either considerably higher or considerably more to the left than it needed to be for this to work — saw Beckerman left with few passing options.

When we look at Beckerman's passing charts, we see that he's spraying the ball wide more often than not. Some decry these as "sideways passes," implying a fair bit of negativity to that fact. But to do so ignores the facts of the match, and it devalues the impact Beckerman had.

He allowed the defenders to focus on what they needed to do defensively without worrying about rescuing the ball in poor positions between the defense and the midfield. Is it any coincidence that Omar Gonzalez was said to have one of his best performances for the national team? I wouldn't say so. He excelled with Beckerman in front of him.

Moreover, Beckerman and Jones — who haven't always been a perfect partnership — showed well together, with Jones being allowed a bit more room to push forward off the ball when necessary. The two combined for an 85 percent passing success rate, with 94 of 110 passes successful.

It's clear that Beckerman had a strong performance, even if it differs from what we might expect from the player. The praise that came his way after the match was wholly and utterly justified.