Before and After: RSL struggle to push past Colorado defense after goal

As always, there are plenty of interesting trends to take from Saturday's draw against Colorado. A quick jaunt over to the chalkboards illustrates the approach the Rapids took to combat a rampant offense after RSL scored.

Share All sharing options for: Before and After: RSL struggle to push past Colorado defense after goal

Before their goal, Colorado Rapids completed 76 of 120 passes for a very poor 63 percent, which is particularly interesting considering that they'd done very well in passing stats in their first two matches. More importantly for them, they'd attempted four shots and looked dangerous throughout.

In the 40 minutes after that first goal, they attempted six shots and completed 97 of 134 passes for a slightly more respectable rate of 72 percent, but they were certainly outstripped during that time by Real Salt Lake's 86 percent passing success — with 268 of 313 passes successful.

During the interim between the two goals, Real Salt Lake went very much on the offensive, attempting 18 crosses (of which only three were successful — a different story altogether) and attempted eight shots. The difference in approach was clear to see, but to further complicate matters, RSL had completed 87 percent of its passes — 226 of 259. That sort of early dominance was a bit surprising, but it was, after all, at home.

It was a bit worrying that Rapids made seven interceptions in the 10-minute period following Real Salt Lake's goal as the home side pressed to gain the lead. They'd completed nine before that point.

For Jason Kreis, allowing the opposition to break up play late on in the match will have been frustrating. There was certainly a greater sense of adventure to play, which inevitably led to the interceptions and subsequent loss of possession, and that was somewhat intentional. The passing, though, may have been a bit too loose and desperate, where a more collected reaction could have helped matters.

Instead, Real Salt Lake rushed play a bit, and despite getting off three clear shots, none were on-target — compare this with Colorado Rapids' three shots, one of which was on target and two of which were blocked (and likely on target.) It illustrates the Rapids' attacking approach — get the ball long and get a body on it quickly — in contrast to their defensive approach — pack in, concede the flanks, and allow crosses in to a crowded area.

You can see the passing charts change once Real Salt Lake scored: From the 80th minute forward, they struggled to get the ball into the final third. Passing accuracy dropped slightly (81 percent, from 86–87 percent throughout the match prior to the RSL goal) — by design, of course, but the graphics indicate pretty clearly where the Colorado defensive line had formed. 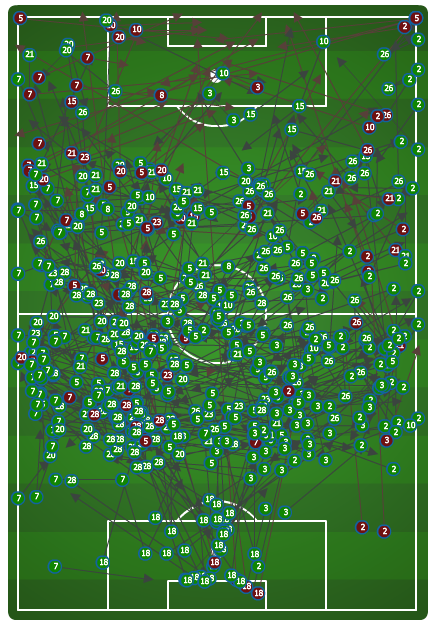 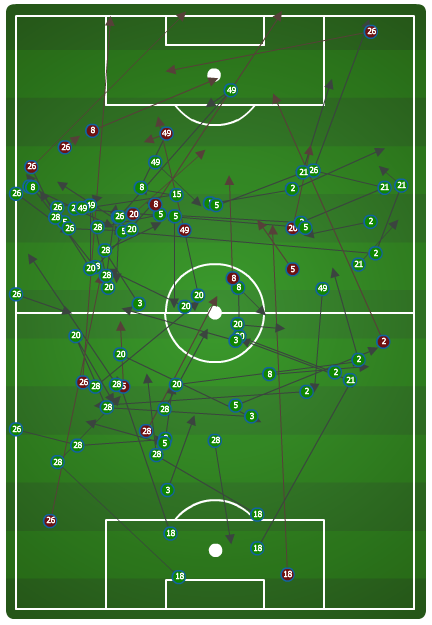