Share All sharing options for: Improved RSL attack leads to goal gains with club on track for best scoring season

The conclusion to the 2012 season was a disappointment for Real Salt Lake. Not only were they knocked out of the CONCACAF Champions League but they also exited in the first round of the MLS playoffs. Both of these events were due to a slump in scoring goals. RSL failed to score at all during their last five matches of the season.

The team finished 2012 with a respectable scoring rate of a goal every 66.52 minutes. But those last five games cost RSL dearly. The decision was made to make changes to the team. One of the greatest positions of change happened with the forwards. The team quickly traded or cut 4 of the 5 forwards on the team. 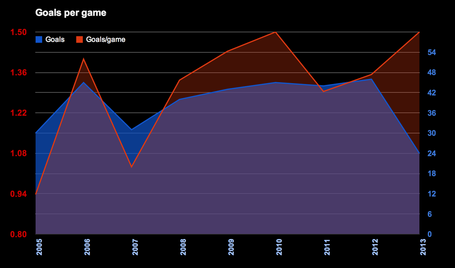 Many questions arose about who would replace these players on the front line. It was announced that Robbie Findley would be coming back to the team after spending time in England. A trade was made with Toronto for Joao Plata. Devon Sandoval was taken in the second round of the MLS Superdraft. And finally, Olmes Garcia was signed out of Colombia to round out the new forwards.

Going into the 2013 season, the question still remained about if these new players, along with star striker Alvaro Saborio would be able to jump start the RSL attack. After 16 league matches, the answer so far has been yes. The team is currently scoring at a pace of a goal every 60 minutes. This ties the 2010 team for the best strike rate in RSL history.

That doesn't say that it has been an easy transition for the team. RSL started the season with a decent record but they were not scoring very many goals. Over the first 9 games of the season, the team only had scored 7 goals. That is a goal every 115.7 minutes. As a matter of perspective, the 2005 team which was by far the worst offensive team in RSL history scored a goal every 96.00 minutes.

Since that time though, everything has changed. In the past 7 MLS matches, RSL has scored 17 goals or a goal every 37.05 minutes. All five forwards on the roster have scored a goal during this stretch of games.

By looking at these numbers it does appear that RSL's off-season mission to strengthen their attack has been a success.