If you're feeling like a real "how'd he do that" about Ned Grabavoy's goal on Saturday, let's break it down. It was, after all, a really, really good one. 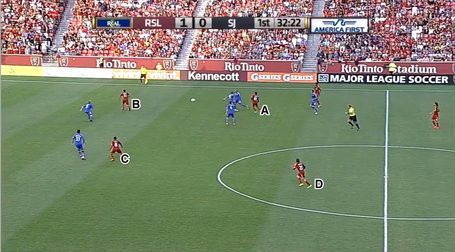 A) Robbie Findley starts deep and plays a superb pass for Javier Morales to free him on the right flank.

B) Javier Morales makes a darting run to the outside; he won't beat his man for pace, but he doesn't have to: Three men have marked Robbie Findley on the counter, hoping to cut out his pace.

C) Joao Plata has drawn the attention of right back Steven Beitashour while center back Brad Ring moves to cut out Javier Morales and the cross.

D) Ned Grabavoy starts an unmarked run through the center. 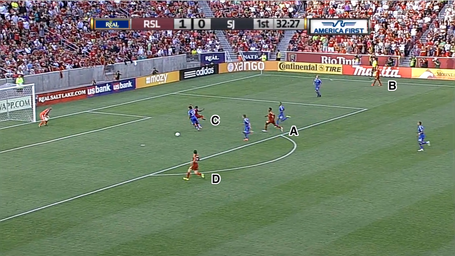 A) Findley has continued his run centrally, keeping the focus of two defenders.

B) Morales puts in a good pass to Plata, and Beitashour expects Plata to try to control it.

C) Plata has spotted the unmarked run of Grabavoy and dummies the ball after pulling Beitashour with him.

D) Morales's low ball into the area gets past Plata and Beitashour while Grabavoy continues his run. He picks up the ball in space and finishes very well.

Ned Grabavoy's run through the middle is fantastic. He's spotted an opening and taken it. That all ignores his finish, which is top-notch.

Robbie Findley knows he won't be scoring the goal here, but he's continued his run regardless and helped create a goal. It's expected of him, sure, but given how he's sometimes discussed, it's worth a mention. A more obvious run might have seen him try to beat the defenders and end up where Grabavoy did — but that doesn't end in a goal. Instead, he keeps defenders busy.

Javier Morales has a fantastic pass on him. Obviously.

Joao Plata, too, was unselfish, spotting Grabavoy's run and making a snap decision to leave the ball. It paid off.