While Javier Morales certainly had the prettiest goal of the evening when Real Salt Lake beat FC Dallas 3-0 — in Texas, no less — Ned Grabavoy's goal to put RSL up 2-0 and hand firm control of the match to the visitors is a fantastic team goal. Let's take a closer look. 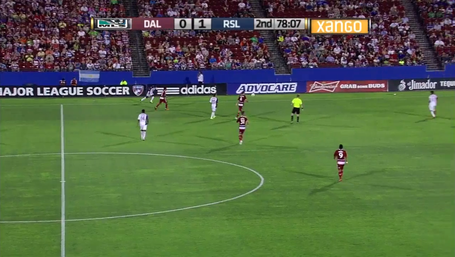 First, we can see Abdoulie Mansally with some good awareness on the throw-in — Ned Grabavoy and Yordany Alvarez are in poor positions to receive a throw-in, which is fine, because he has a defensive drop should he need, and because Javier Morales is in a fantastic position to receive the ball here. His positioning allows him time to receive the ball and shield it, while the deeper players in the midfield would be immediately subject to a challenge for the ball. Interesting here is the fact that FC Dallas midfielder Ramon Nunez (#9) isn't marking anybody. 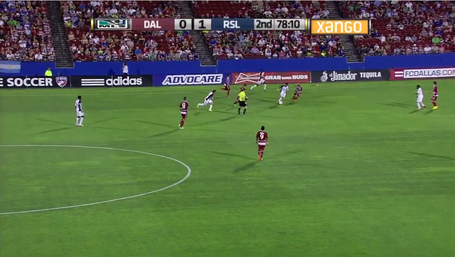 Here, Javier Morales has received the ball and has started to turn with it — toward goal, where the defender has led him. This is perhaps a poor decision, and they make think they can get away with it because they have several players in the middle at current — they're off-screen, but you'll see them in future captures. Mansally has wisely started his run down the left flank, and that's essential. Joao Plata is in a good position to receive the ball, but the odds that he'd get pushed to the flank make it perhaps a poor option, given Mansally's positioning on the left leaves him free of a defender. Thus we see that Plata's position is perhaps more a decoy than anything, and whether that's intentional or not is up for debate. We also see Grabavoy starting his run, while Yordany Alvarez is sitting deep, ready for an attack to swing back our way. 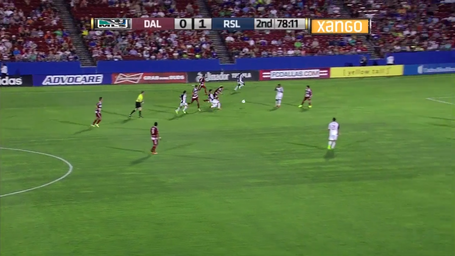 Here, things really start to heat up. Or, you know, something. Mansally's run is continued, and this is essential — and perhaps an overlooked part of his game. He makes intelligent runs, and by its very nature, this leads to some defensive vulnerability. I'd wager that this is intentional, and with Tony Beltran out for an extended period, this will be an important factor. Morales does very well to find him around the defender, who has unwisely shepherded him to the middle. It's the multiple options here that make the occasion dangerous. Luis Gil is in a good position, and you'll soon see defenders start to mark him; Olmes Garcia is offscreen and is certainly already marked — his reputation for being a dangerous player precedes him, and it is much to our benefit. Note also that Ned Grabavoy has continued his run from just in front of the midfield stripe. 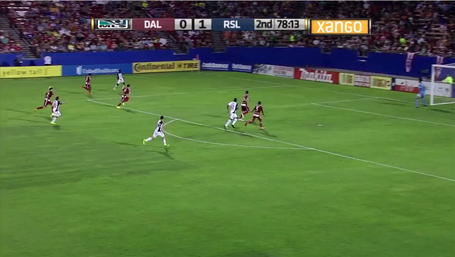 Well, well. Olmes Garcia has actually attracted two players to himself. Luis Gil is making a great diagonal run inside the box, and we'll see just how important this is momentarily. Mansally's got the ball in a good position, but crossing it to Garcia would surely be the wrong option — he has two men on him. Waiting for play to develop a second or two longer would be wise, and that's exactly what he's done. 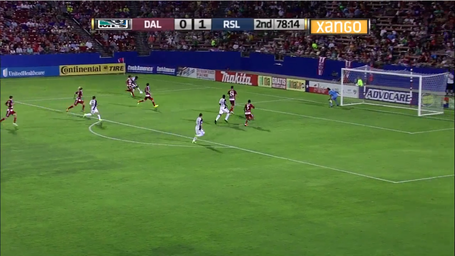 Mansally continues his run and spotted some space nicely: His defender is on the wrong side of him, despite Mansally having start his run from a throw-in at the halfway point. Another defender has moved into the box, presumably to just get in the way, but he's not succeeded at that. The player who was marking Javier Morales has continued his run into the box, probably to mark Grabavoy, but he's allowed Grabavoy gobs of space in the middle. Gil has continued his run, drawing a defender off of Garcia, opening up an option for attack if needed. This adds a bit more confusion to the defense. 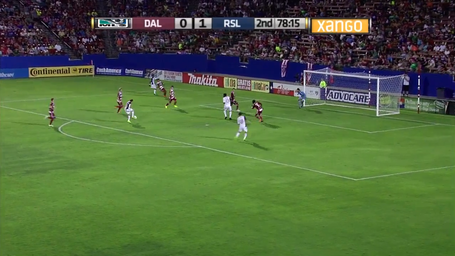 We're just about there. Grabavoy receives the ball, prompting a reaction from Jaier Benitez and the man who simply ran into the box without much of a plan at all. Ned's brought the ball down superbly, and the pieces are in place for a fine strike. Note the goalkeeper's position: Mansally's run has forced him to move to cover a difficult shot from the left flank, and while it was probably wise when Mansally had the ball, the middle is left wide open. But he fails to recognize the more dangerous options forming, as does the rest of FC Dallas's meager defense. But here's the thing: They've got six players back and have failed to mark Ned Grabavoy in the middle. It's criminal, really. 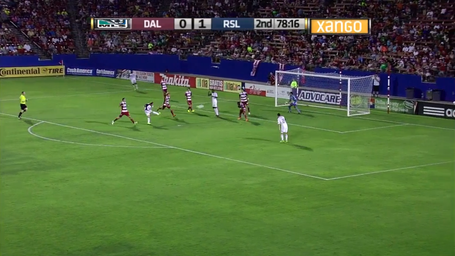 Look at that. What a strike from Grabavoy. The entire right side has been left open for him, and even if he didn't have the angle on the shot, Luis Gil is right there to receive the ball. For some strange reason, Benitez has ducked, and I'm not sure why. Key is the fact that Olmes Garcia has pulled defenders away from the right side; the space left behind opens Ned Grabavoy to score his fourth of the season — beating his personal record for most goals scored in a season.