Set pieces: Defensive problems crop up with inexperienced back line

If there's one thing Real Salt Lake has been recently suffering from, it's a lack of set piece defense.

Share All sharing options for: Set pieces: Defensive problems crop up with inexperienced back line

We saw the first goal against NYRB conceded through a set piece (and two more, though those were penalties and impossible to truly defend post-concession) and, indeed, goals against Sporting Kansas City conceded in the same sorts of ways.

It all rather brings to mind a question about our defensive shape: Is it a matter of personnel? Is it a systemic feature we willfully allow, as it allows us to focus on other key features of our approach? Or, perhaps, is it something that's imminently fixable?

The answer is almost certainly a mix of the three concerns. We are certainly an attacking side at our core — which isn't to say that our strengths do not also include defending, but that sort of defending isn't our specialty. We're much better off when we don't allow sides to gain set pieces in dangerous positions.

In those aforementioned matches, our personnel wasn't at its peak — but to blame any individual for the problematic defending is folly. Set piece defense is a team concern, not an individual concern. Sure, individuals play a role — important roles, too. But organization and communication are shared tasks that all take equal part in, and if a player is lacking in his marking, those two things are often to blame — not just individual skill.

As such, the problem should be a fixable one. It's not entirely surprising that communication in important areas is lacking, considering we've been playing with defenders and a goalkeeper who simply have not played much together. These are the sorts of mistakes that are inevitably made during those scenarios. They can be resolved best by simply communicating and practicing communication during those key times.

As an illustration, let's take a look at Tim Cahill's first-half goal against Real Salt Lake. 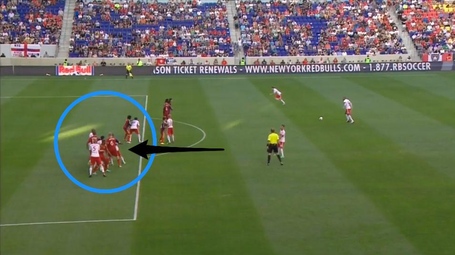 Here, we see the group is relatively tight together. There are four defending four — this seems fine. The other areas, as well as the runner on the left defensive flank, are covered well. 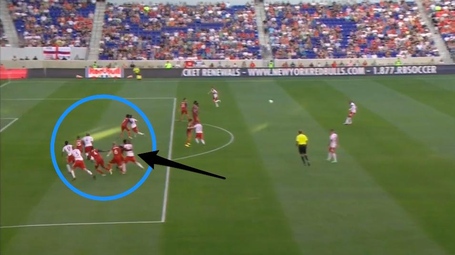 Everyone's started moving here. The attempt to keep the attackers offside has failed, and Tim Cahill has broken in front. Both Abdoulie Mansally and Nat Borchers are marking one man, but Borchers has realized Cahill is free and is bursting forward. Aaron Maund is doing well to meet back up with Marcus Holgersson before the kick reaches the far post. 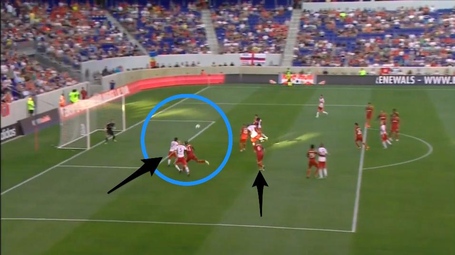 Finally, just before the goal, we see Nat Borchers caught rather in no-mans-land, while Aaron Maund is tasked with marking both Tim Cahill and Marcus Holgersson. This is a difficult task. Remarkably, they've both stayed onside at the kick. It should be noted that this is no easy finish from Cahill, and Jeff Attinella is in as good as position as one could hope.

That Jeff Attinella gets a hand on the ensuing goal is of no consequence. The real damage had already been done when Aaron Maund, a 22-year-old center back, was left to mark two very experienced players.

And so it illustrates the importance of team defense in these instances: Attinella needs to control the ball that came into him, and Nat Borchers and Abdoulie Mansally need to decide who exactly they're marking. It's not the first time this has happened this season — and it probably won't be the last. But far too often, players have been finding time and space in the box on set pieces, and that it's punishing us is absolutely no surprise.