Goal Breakdown: Luis Gil's goal and the 14 passes that made it possible

Share All sharing options for: Goal Breakdown: Luis Gil's goal and the 14 passes that made it possible

Luis Gil scored a fantastic goal last night against Columbus Crew, but the build-up is every bit as scintillating. The 14 passes leading to the goal were immensely positive, which surely separates this from many "death by a thousand passes" goals — this is, instead, Real Salt Lake wholly and absolutely at their best against a side who simply cannot cope with the movement. 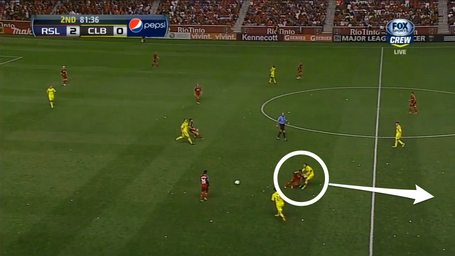 In this first illustration, Robbie Findley has dropped into a deep position to get involved with play; he immediately lays the ball from Beltran off to Sebastian Velasquez, who has managed to say free. Note that he is now dragging a defender with him, first higher up the pitch, then deeper. This will become relevant as the play proceeds. 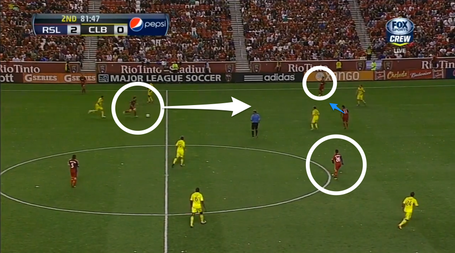 In this second illustration, Ned Grabavoy has picked up the ball on the left flank and is in excellent space. Luis Gil, further up on the left flank, and Sebastian Velasquez, central, are in positions to receive this pass, as it would seem a man has marked Morales out of the pass at this moment. 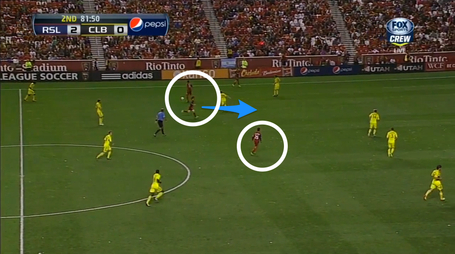 But he's woefully unaware of Morales's position and has allowed him to move laterally, and when he receives the ball, shown in the third illustration, Grabavoy is allowed to continue his long run. Instead of playing an exceedingly obvious pass, Grabavoy has illustrated superb patience to wait for the run of Morales. This is perhaps Grabavoy's greatest quality. 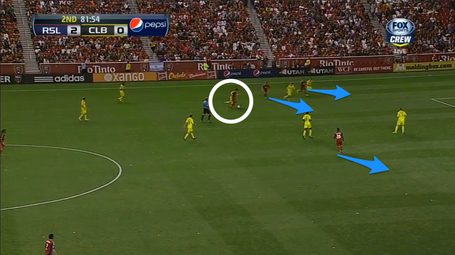 This fourth illustration shows Morales picking the ball up and again beating his man. He is at the center of this play, but not as a playmaker - instead, he's serving the role one might typically ascribe to Ned Grabavoy and connecting play. His little chipped pass to Sebastian Velasquez is brilliant, and it seems he made that pass having suffered a foul in the build-up, as Silviu Petrescu has waved for advantage. 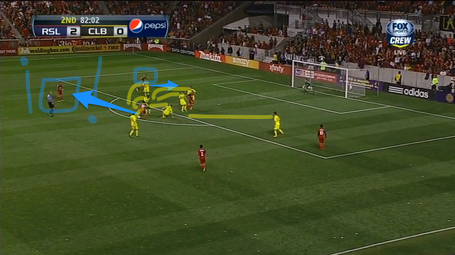 The marking on Velasquez here is poor; he's allowed to continue his run-up essentially to the edge of the box. He moves left, and most defenders might think he's about to take a shot. Perhaps he was, but he intelligently lays the ball off to Ned Grabavoy after drawing the attention of four or five defenders - note that they're all focused on Velasquez and what he might do with the ball. 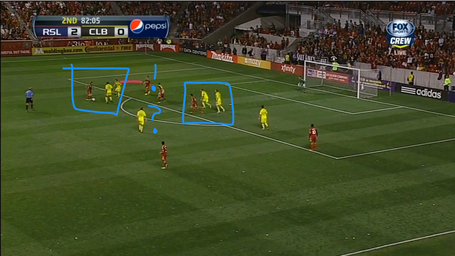 This next illustration shows the impact of Velasquez's dribbling, as Ned Grabavoy is sitting here with the ball with plenty of time. Other midfielders might try to force play here, immediately unleashing a pass or a shot that's not very likely to end with a goal. Grabavoy, though, sits very patiently, waiting for Luis Gil's man to drop off before making a simple pass into him. At this point, nobody is focused on Gil - Velasquez is in a good spot, Morales is at the top of the box, and Findley is on the right flank stretching play ever-so-slightly. 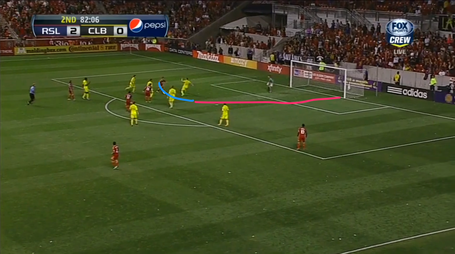 Gil is now left with a bit of work to do. He has one central defender to beat, but he must do so quickly enough that the three whose attentions have now shifted to him are left in the dust. He does this with little trouble, sidestepping the central defender and putting his shot expertly past the goalkeeper. Gil then embarked on a bit of a celebration I don't really understand, but can you blame him? A very nice goal, and a shining example of the value of team movement.