Chalk it up to Kreis: RSL's complete performance from front to back

Share All sharing options for: Chalk it up to Kreis: RSL's complete performance from front to back

Real Salt Lake played what was ostensibly their best match of the season on Saturday with a 4-0 win over Columbus Crew, with the entire side ticking, whirring, and all told making those good noises clocks so often make. Describing the victory as clockwork might not entirely describe it, but it's a start.

"For me this is the most complete match we’ve played the entire season, and I think it’s fantastic that this comes a day after I challenged the group. I feel like we’ve done a lot of good things this year in every single match. We’ve also done some pretty bad things in every single match. So tonight I thought it was the most complete performance we’ve had in a match this year, and it comes at the right time because we’re at our most critical stretch. We have a lot to play for and a lot to look forward to. We needed to put some confidence behind our boot and that’s exactly what we got." (Source: Jason Kreis post-match comments via RSL Communications)

What does that look like on a chalkboard? Let's start at the back and make our way forward. 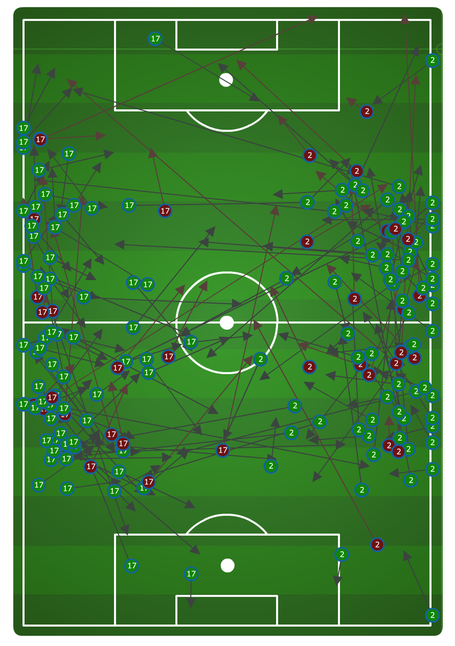 Tony Beltran and Chris Wingert were essential on the flanks, controlling play neatly and getting forward at opportune moments. While they might typically pull in a few interceptions, those weren't forthcoming — Columbus Crew were content avoiding those areas in the pass for some strange reason. Instead, we saw the two connecting play out wide. The passing rate wasn't perfect — only 78 percent between the two. Both completed 66 passes, with Wingert misplacing 19 to Beltran's 18. That's not too surprising when Crew were playing a defensive first half. When the opposition started attacking in the second half, Beltran and Wingert played a more reserved game, getting forward less often. 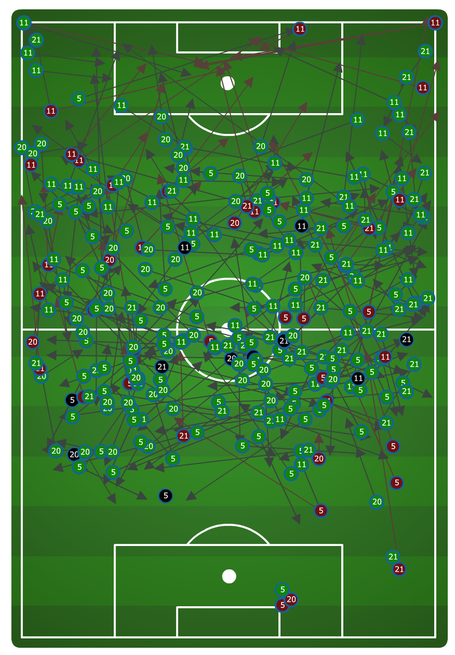 The midfield played a particularly important role — as always — with everyone getting very involved in the passing movement. Where we've sometimes passed around the back when the opposition are stymying our opportunities, we opted for a higher approach this time. Of the four starters, Luis Gil completed the fewest passes, but with 48 of his 52 accurate, he can certainly hold his head high. He was all over the place during his 90-minute performance. Ned Grabavoy completed only slightly more passes, 51 of 56. Javier Morales was next in line, and most of those passes around the box you see are from him. 54 of 75 would seem to indicate there wasn't a whole lot of accuracy in Morales's passing, but he was constantly trying to unlock the opposition defense. It worked. Completing the most passes and really controlling the match was Kyle Beckerman, with 73 of 85 completed. His two goals, too, are a testament to his impact. 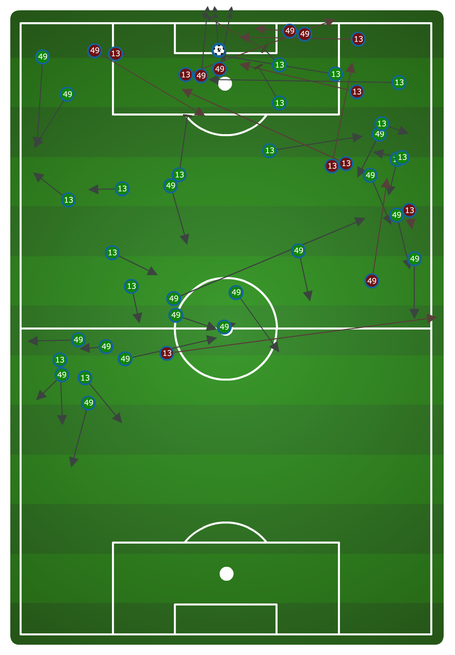 Finally, let's touch on the forwards a bit. Olmes Garcia and Devon Sandoval had a fine performance, with Garcia assisting on Sandoval's goal, the second of the match and the one that truly opened up the game. What we see, though, are two forwards who are linking up with the players around them, and there was something encouraging about that. So many times we have seen Olmes Garcia unnecessarily try to take on the opposition on his own, but on Saturday, he was a complementary player in the most important of ways. Devon Sandoval likewise displayed that, and we saw again how valuable his strength can be in maintaining possession in difficult spots on the pitch. It was not essential for those two to get loads of touches, as the attention devoted to them by the Crew defense allowed the midfield more time to breathe, and it surely led to some strong, cohesive play.