Chalking it up: RSL falls short in final third in 2-0 loss to Seattle

Share All sharing options for: Chalking it up: RSL falls short in final third in 2-0 loss to Seattle

The key to preventing goalscoring chances for most teams is to limit the amount of time they spend in the final third. This is not a surprise, and indeed, it's the approach Seattle Sounders took last Friday. 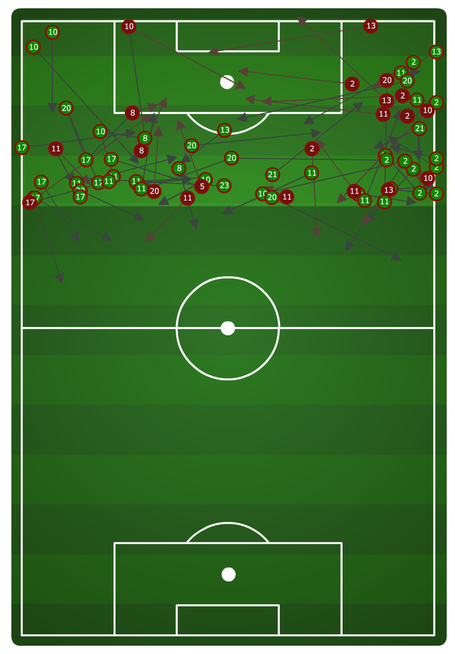 A high pressure game from the Sounders saw RSL with more defensive-half passes than attacking-half passes — not that this is too surprising. But 247 passes in their own half to 185 in the opponents was perhaps not good enough for Real Salt Lake. Only 25 percent (47, with 70 percent accuracy) of the passing in the attacking half took place in the final third.

Of course, it's the quality of pass that really matters in the final third, and that was lacking as well.

Having been proven vulnerable once again to a high-pressure game that ends at the midfield line, we should wonder what it takes to solve the tactical conundrum that's cropped up.

Part of RSL's strategy was already in place: Get into wide positions and splay the ball into the middle. Crossing isn't our strong point, but this allows somebody like Alvaro Saborio opportunity to capitalize on errors in the box. Without Saborio, the plan seemed lacking.

By disrupting our ability to get into the final third, even in wide positions, Seattle had essentially stopped our first escape plan. Even had we wanted to swing balls into the middle, we didn't have the opportunities.

Another plan of attack could have been to take more frequent shots from distance; we took that opportunity, but we forced only two saves that way. It could certainly have been better, but we took 7 shots from distance (although one was a particularly woeful effort from Khari Stephenson from outside the final third) — but Seattle were content to let us try a few of those, knowing their pressure would find us unable to break in.

What we really lacked was hold-up play, and while it's easy to point to Saborio, the problem was more fundamental. Neither striker in the first half, nor any of the three in the second half offered up a central position that allowed for effective but simple distribution. That would have made a world of difference, as it allows a chance to involve the midfield in play further up the pitch.

Who exactly fills that role is difficult to say definitively, but I'm inclined to think that the four remaining strikers each have a chance to stake a claim. Findley offers physical characteristics and the ability to wheel off at a moment's notice after distribution. Plata offers an uncanny ability to keep the ball under pressure. Garcia offers magic on the ball, particularly with spectacular passes and dribbling. Sandoval offers the most traditional hold-up play of the remaining four.

There are arguments to made for each player tactically, but let's hope we simply get Saborio back in action imminently.