Let's break down a goal: Kyle Beckerman's brilliance and midfield movement allows for a stunner from Plata. 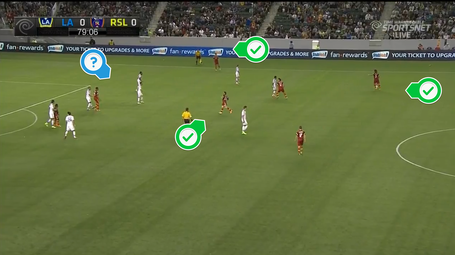 First, we see that LA is not set up to defend the attack initially -- they're struggling to find the right space and players to cover. Ned Grabavoy's making a run up the right channel, Tony Beltran's occupying the right flank -- and this is important, because it draws Landon Donovan to him, freeing up a bit of midfield space. They're attempting to cover everyone on the field instead of understanding what would be most advantageous to cover. In this circumstance, they might have left Beltran free and tried to close up holes in the midfield -- but it might only delay the inevitable. 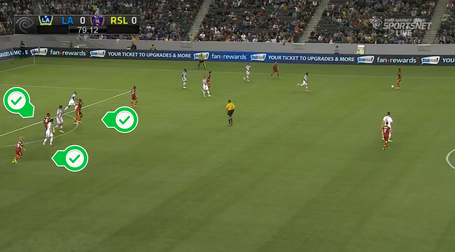 Second, our midfield has been moving around a bit (naturally so). We see Ned Grabavoy free, and Luke Mulholland -- who drifted wide left -- is dropping back to pull a midfielder with him. Leonardo's darting off to cover the free Grabavoy, as his full back and midfielders around him have left to cover Beltran and Cole Grossman more closely. This is when we start to see the space emerge. 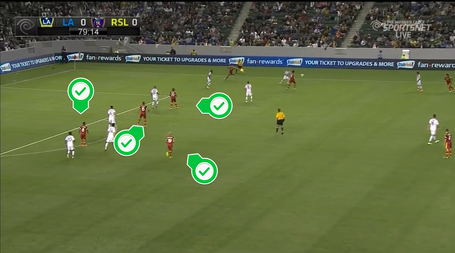 Third, Beckerman swings a ball toward Beltran, but Grossman gets there first. This is important a bit fortunate, because a swung-in cross here wouldn't do anyone any good -- we see Saborio is starting to drop deep once Grossman receives the pass. Beckerman is already making his run a bit more centrally -- space has emerged here, and it gives him a great opportunity to get the ball once more. 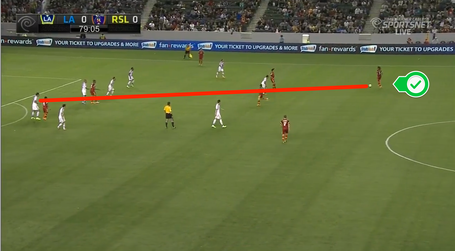 Fourth, we see Beckerman in this great position. We even see him spotting the pass he wants to make. Alvaro Saborio is about to begin a run into midfield, drawing Omar Gonzalez -- one of the best defenders in the league -- well out of position, forcing him to make an ugly stab at the ball. We are a bit fortunate here. Grossman moves a bit wider, drawing a midfielder with him and opening space, and Plata is ready to make the run behind the defense. Interestingly, here we see that Omar isn't sure who he's marking -- it initially seems he's marking Plata, but that would seem to be A.J. DeLaGarza's mark. 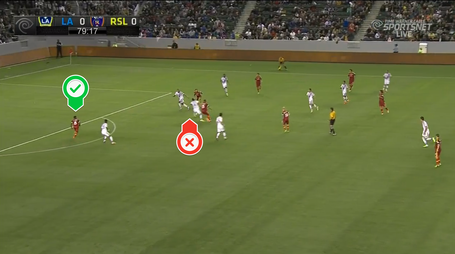 Finally, Beckerman plays the pass, feeding Joao Plata. Gonzalez makes the stab from behind Saborio -- he's come away from his mark to pressure the player he thinks is receiving the pass -- but in the end, he ends up with egg on his face. Plata picks up the beautifully threaded pass from Kyle Beckerman, and his finish -- with no room for error -- is as perfect as you could ask.