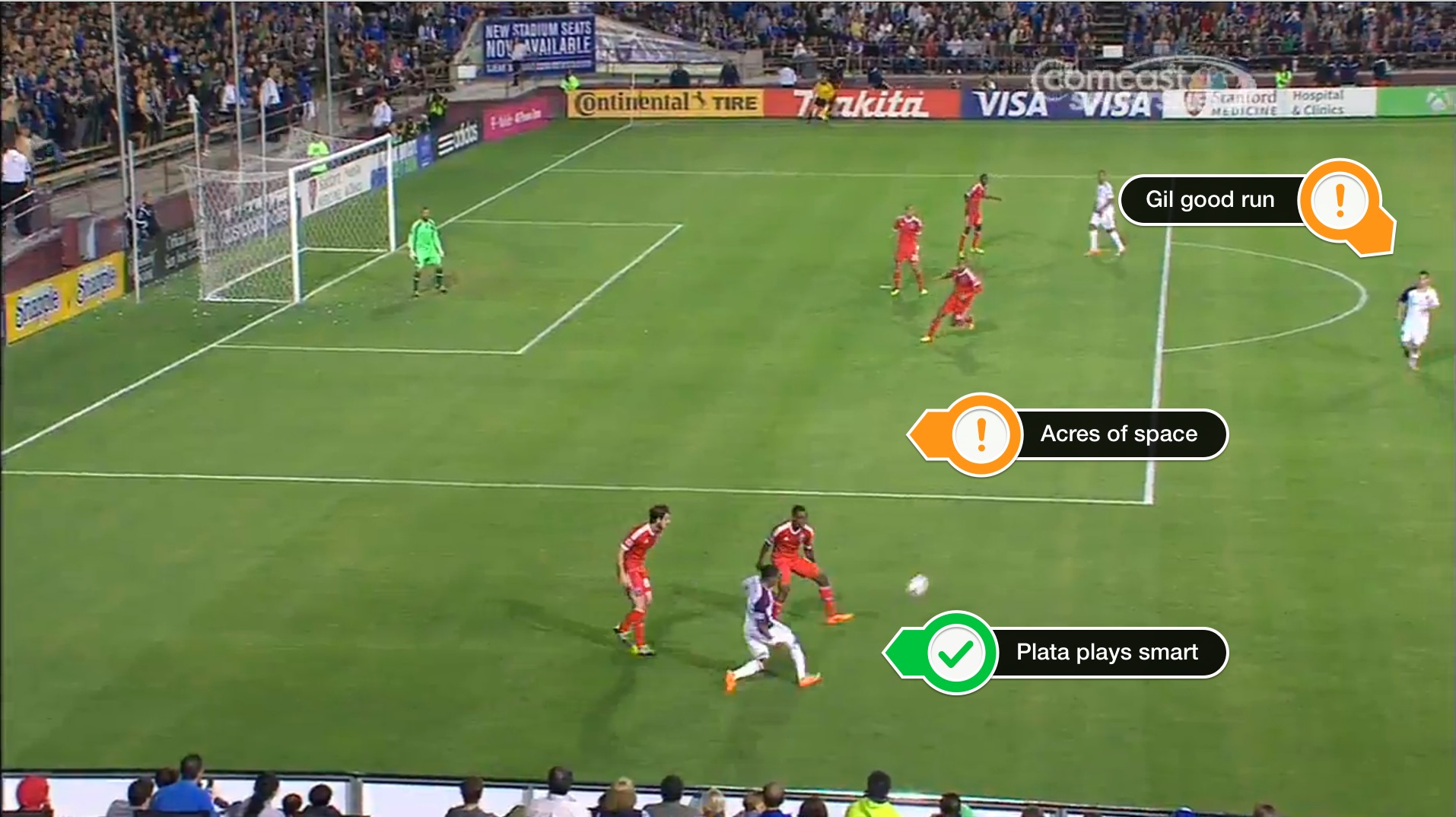 1) Joao Plata has expertly received a long pinpoint pass from Kyle Beckerman, and clearly, San Jose is not ready for this. Luis Gil is already making a good run toward the box when Plata plays him in with a fine pass, and there are acres of space available for the forward to move into. The only issue: There are two players in his way. Plata of 2013 might have tried to beat both men on his own - and hey, maybe it would have worked - but instead Plata now sees Gil's movement before immediately turning and making a run. 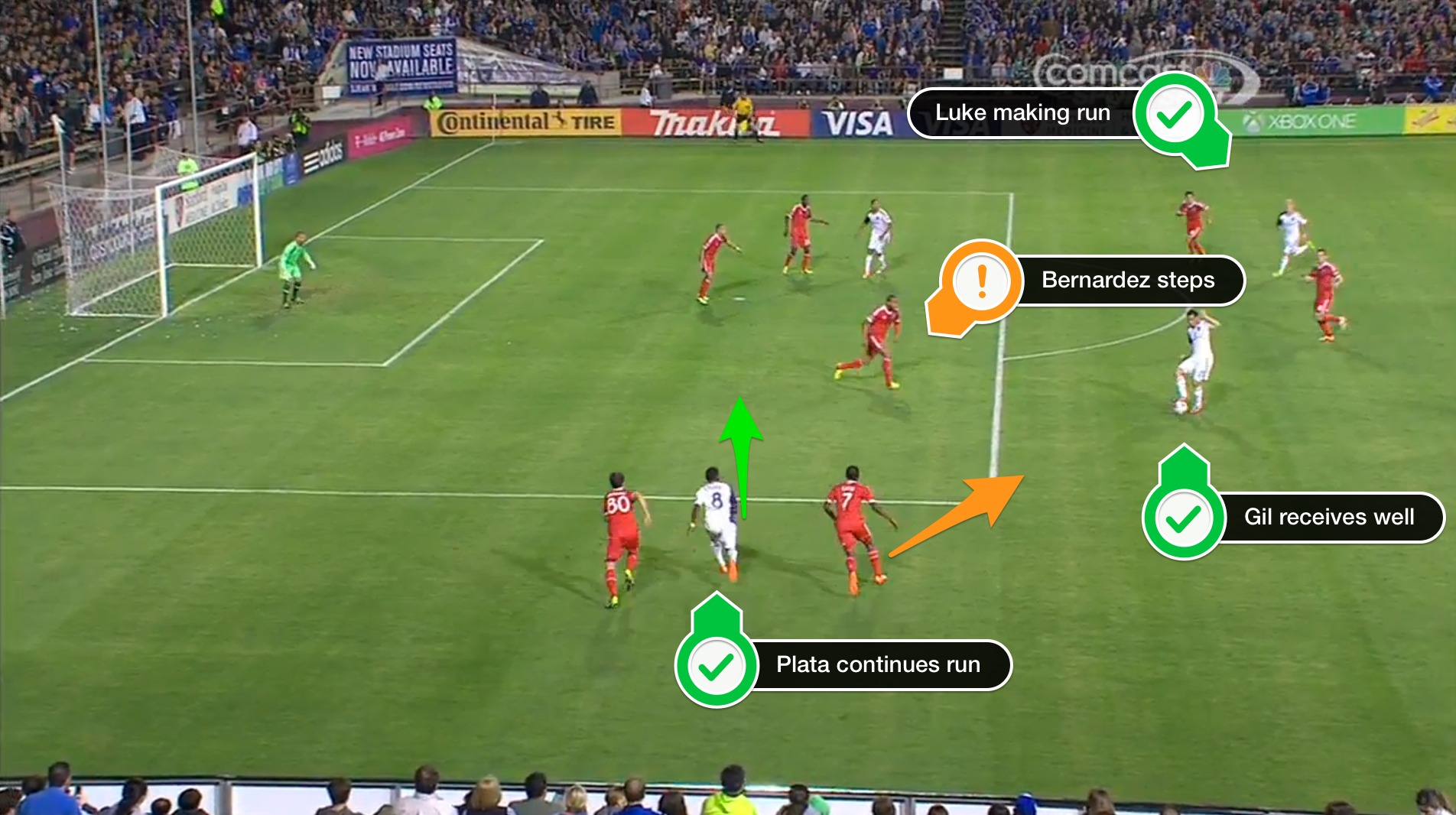 2) Here Plata makes his run, and it's made possible precisely because of his pass into Gil. Cordell Cato (#7) initially looks to step toward Gil, seeing that he's in acres of space. But he leaves the notion behind, darting to try to intercept a pass into Plata, with Victor Bernardez stepping to approach Gil. Of course, it's a case of too-little-too-late, as we'll see soon. 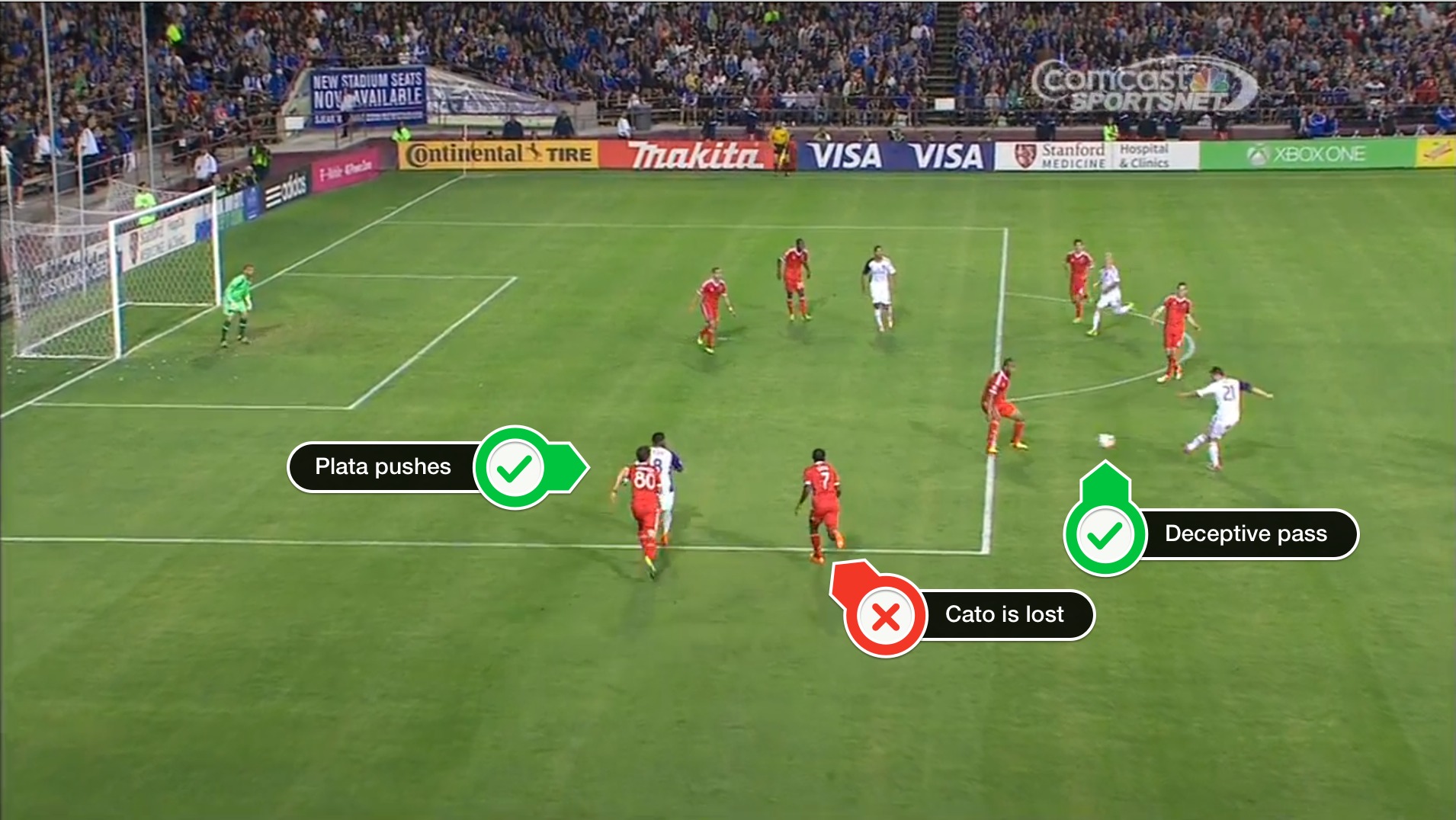 3) Plata has pushed beyond Jean-Baptiste Pierazzi (#80) and Cato (#7); Cato loses out on the play because he dithered on his decision, while Pierazzi simply hasn't made the proper effort to get goal side of Plata. Luis Gil's pass here is especially interesting, because he's taken this considerably harder than you might expect in this situation. It makes it difficult for Plata to control, but it also ensures he gets the ball past the capable Bernardez, who is stepping to him. Further, it may mask his pass as a shot, which could cause a momentary lapse in concentration from the defense. 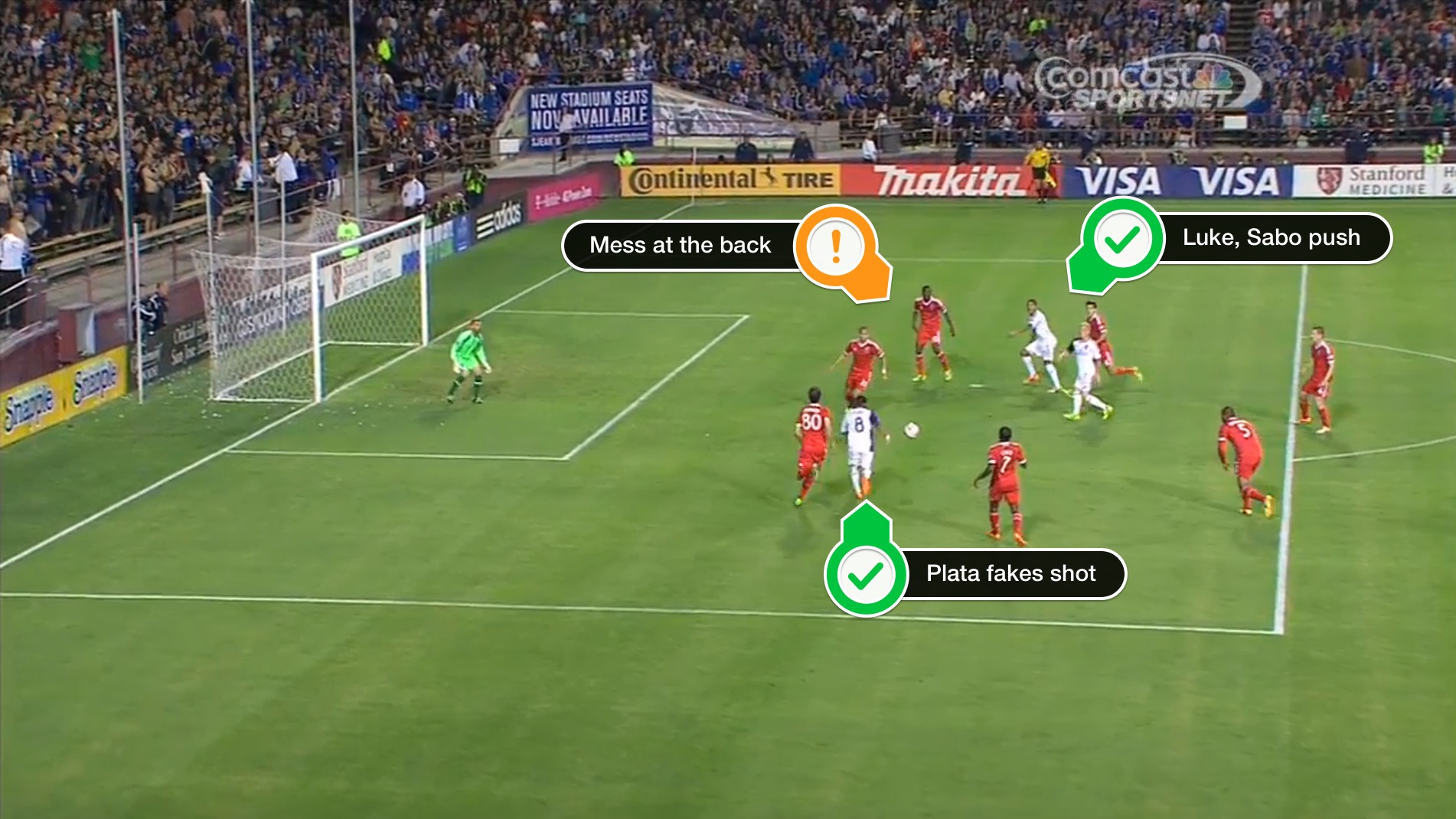 4) Luke Mulholland and Alvaro Saborio have continued making good runs into the box - this is important because, while they can be relatively sure that Plata is going to shoot here, they're in positions to pull defenders away or make a quick rebound. This is something both Mulholland and Saborio can do, with Mulholland doing just that later in the match. There is a resulting mess at the back - nobody is quite sure who they're marking. 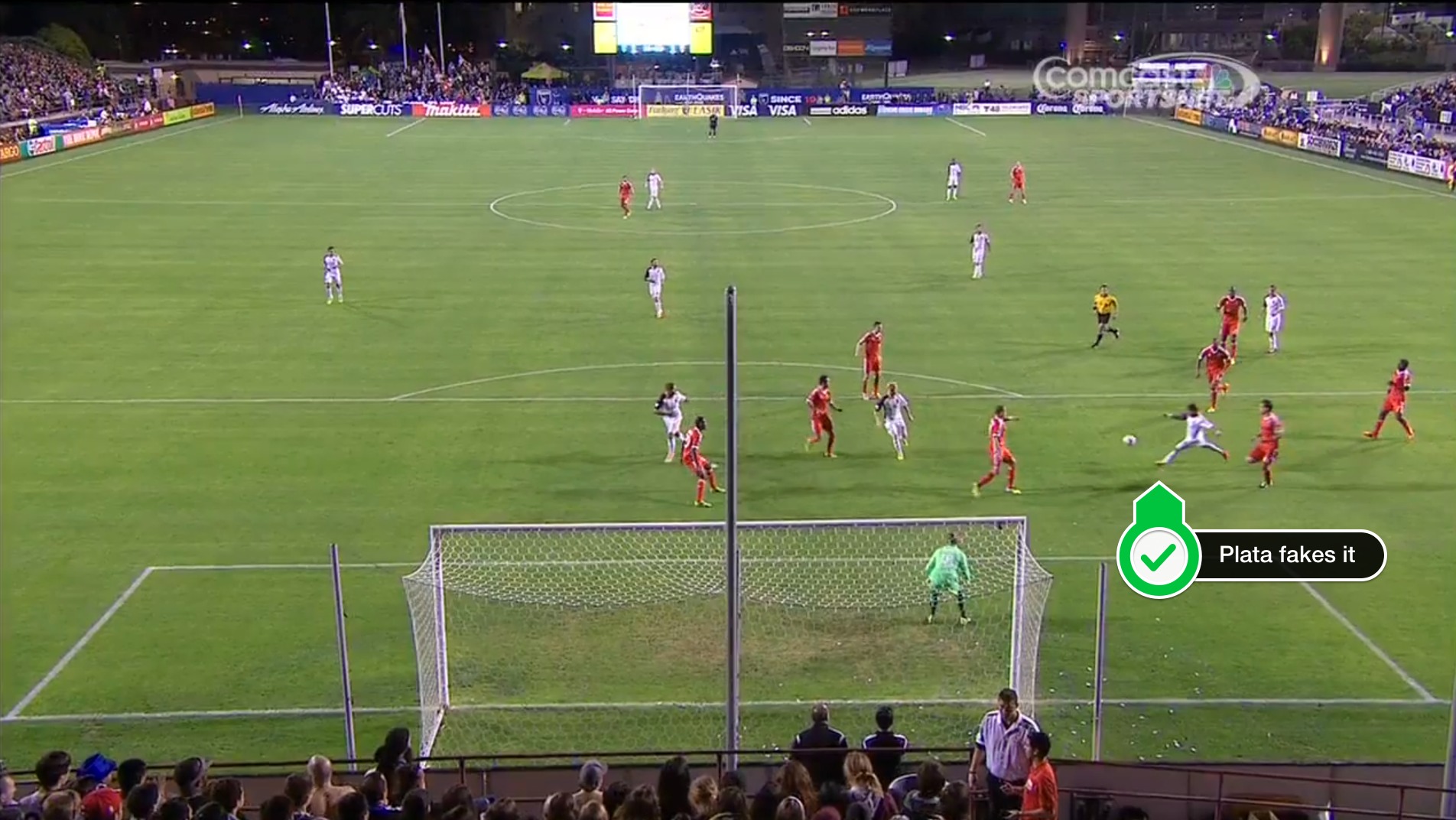 5) Plata winds up for a shot and misses - purposefully. On first look, this seemed like a mistake - but looking from this rear angle, we can see what he saw. The angle toward the far post is incredibly difficult to reach with Bernardez there to stab in front of a shot; the near post is blocked well by Jon Busch. 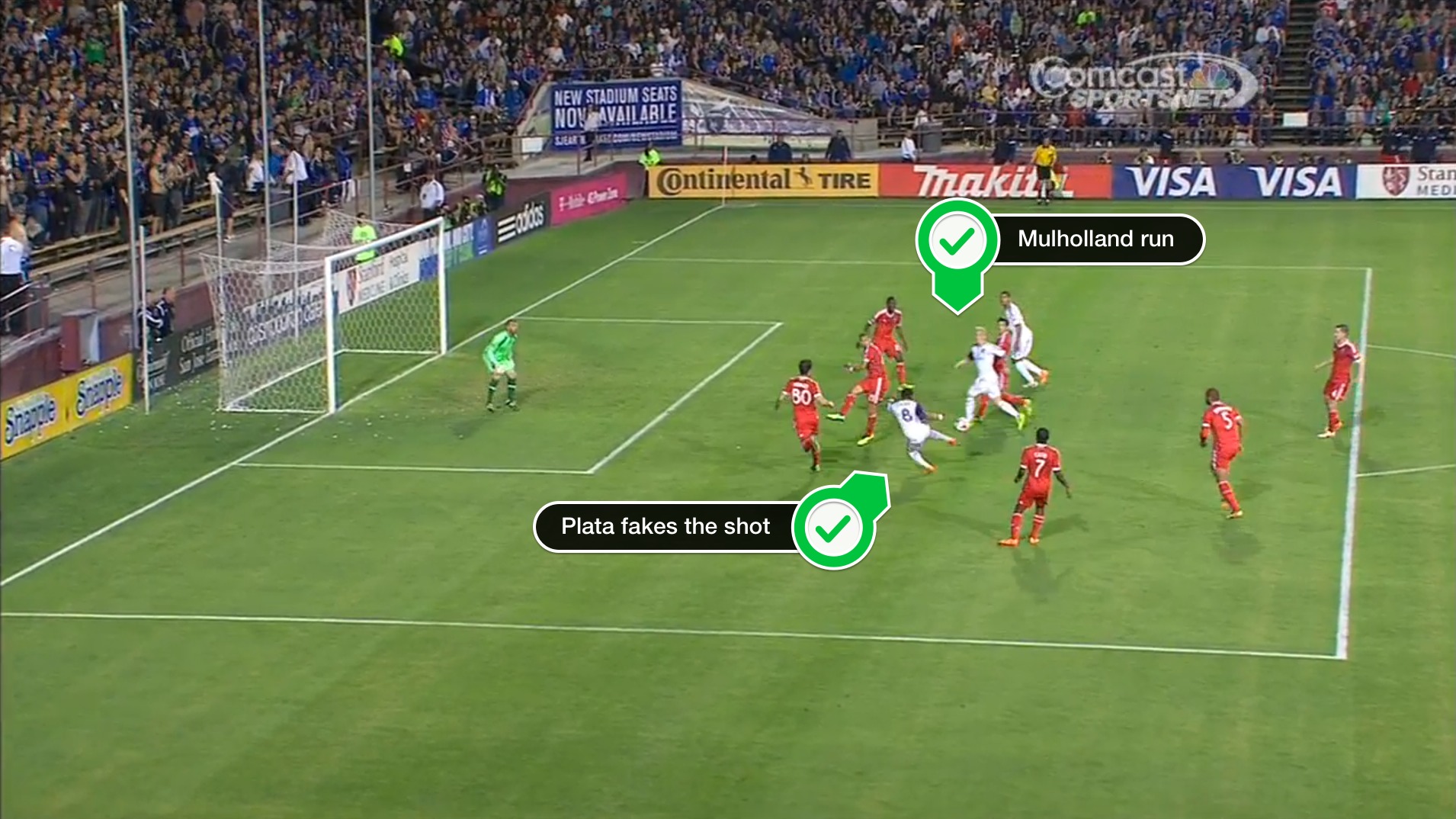 6) We see exactly what we expected to see resulting from the fifth shot - Bernardez is in the way of a far-post shot, and Busch has the near post covered. By this point, Plata knows this quite well, and a goal-scoring solution seems difficult but not impossible. 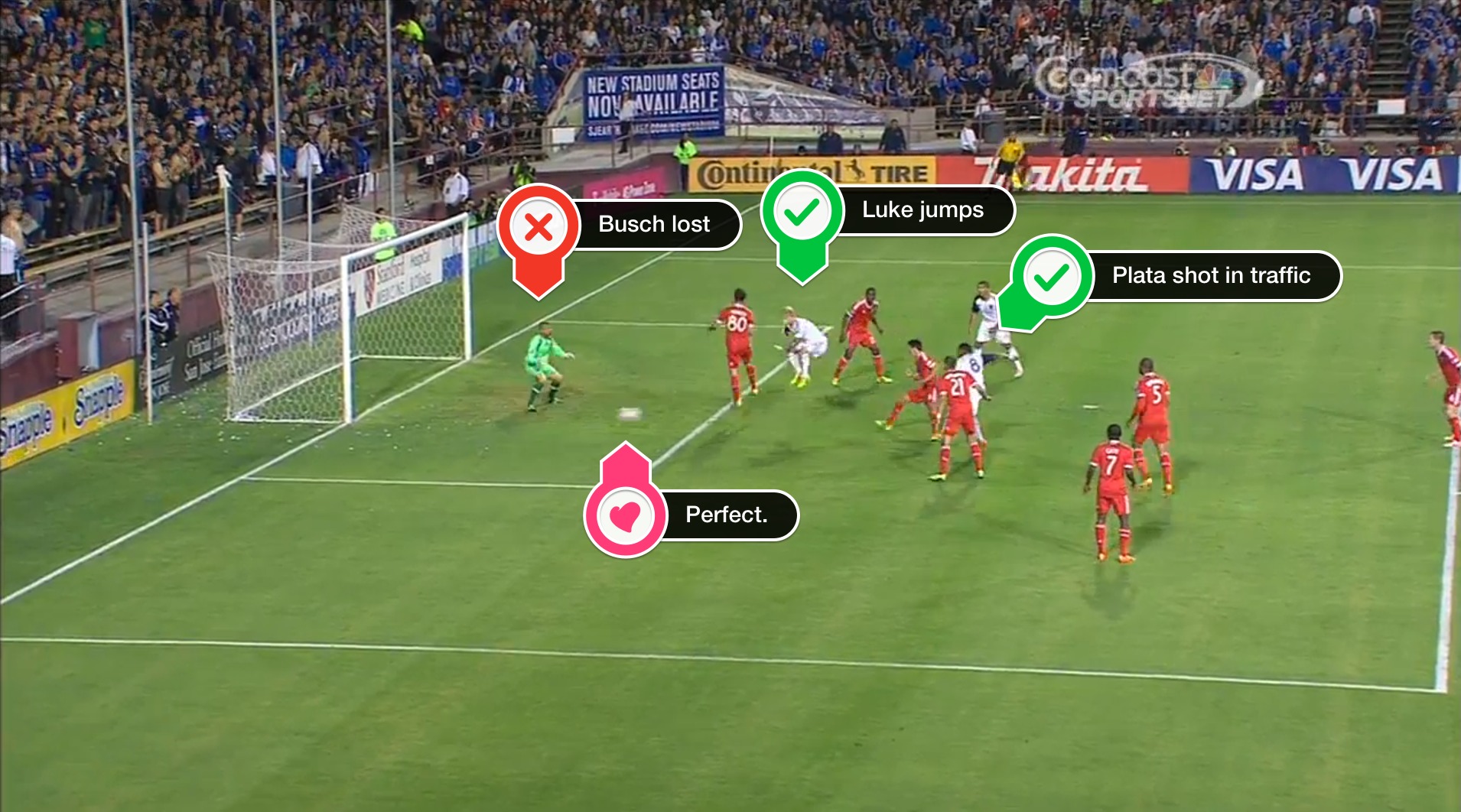 7) Plata lets the ball bounce and fires again - waiting just the right amount of time to let Jon Busch move to the far post, to move past Bernardez, and for everything to become disorganized. Luke Mulholland takes a quick leap to move himself away from the shot, which is essential because it goes directly beneath him. The shot nestles perfectly into the bottom corner at the near post, and Plata has deceived six men and a goalkeeper in the box in the process - beating three of them directly on the run, and the rest on the shot.